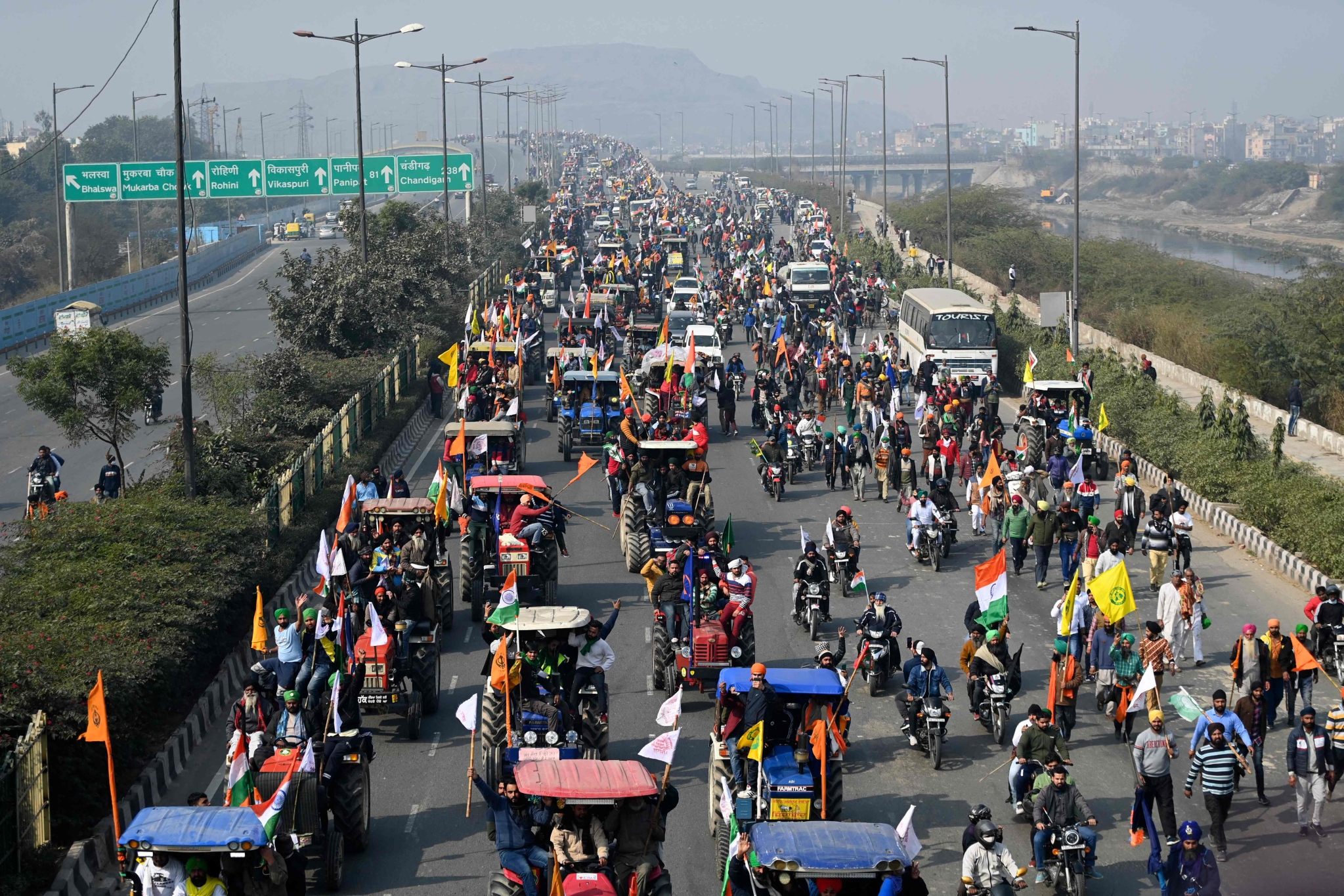 Many farmers had been protesting and camping at Delhi's borders since November 2020 with a demand that the Farmers' Produce Trade and Commerce (Promotion and Facilitation) Act, 2020, Farmers' (Empowerment and Protection) Agreement on Price Assurance and Farm Services Act, 2020 and the Essential Commodities (Amendment) Act, 2020 be rolled back and a new law made to guarantee MSP for crops.

Here’s a complete timeline of the farmers’ protest:

June 2020: The three farm laws - the Farmers’ Produce Trade and Commerce (Promotion and Facilitation) Act, 2020; Essential Commodities (Amendment) Act, 2020; and Farmers (Empowerment and Protection) Agreement on Price Assurance and Farm Services Act, 2020 – were promulgated by the Centre as ordinances. The Bharatiya Kisan Union issues a statement objecting to the ordinances.

September 2020: Ordinance is brought to Parliament. Farm Bills are given presidential assent and notified in the Gazette of India and become Farm Laws. Farmers in Punjab began a three-day ‘rail roko’ agitation bills.

November 2020: After sporadic protests against the new farm laws, farmers’ unions in Punjab and Haryana gave the call for a ‘Delhi Chalo’ movement. The Delhi Police rejected their request to march to the capital city. Farmers marching towards Delhi faced water cannons, tear gas as the police tried to disperse them.

November 28: Home Minister Amit Shah hold talks with farmers as soon as they vacate Delhi borders and move to the designated protest site in Burari. However, farmers rejected his offer, demanding to hold the protest at Jantar Mantar.

December 2020: Government holds first round of talks with representatives of farmers but the meeting was inconclusive. The second round of talks, held on December 5, between farmers and the Centre also remained inconclusive. The Centre proposes to amend the three contentious laws, but farmers reject the proposal and vow to further intensify their agitation until the laws are repealed. Bharatiya Kisan Union moves Supreme Court against the three farm laws on December 11.

December 8, 2020: Farmers gave a call for Bharat Bandh. Farmers from other states also gave their support to the call. On December 30, Sixth round of talks between government and farmer leaders was held. The meeting saw some headway as the Centre agreed to exempt farmers from stubble burning penalty and drop changes in Electricity Amendment Bill, 2020.

January 2021: Seventh round of talks between government and farmer leaders also remained inconclusive with the Centre not agreeing to repeal the farm laws. The Supreme Court, on January 11, questions the Centre over its handling of the farmers’ protest and puts on hold the implementation of the three farm laws and sets up a committee to evaluate any changes to the laws.

January 26, 2021: On Republic day, thousands of protestors clashed with the police during the tractor parade called by farmer unions on January 26, demanding a repeal of the laws.

February 2021: The cyber-crime cell of the Delhi Police has registered an FIR on charges of “sedition”, “criminal conspiracy” and “promoting hatred” against the creators of a ‘toolkit’ on farmer protests, which was shared by Greta Thunberg.

March 2021: The Punjab Vidhan Sabha passes a resolution asking for the unconditional withdrawal of the farm laws in the interest of the farmers and Punjab. March 6 marks 100 days of farmers protest.

April 2021: Few tractor trolleys from the Singhu border return to Punjab ahead of the harvesting season. Farmers set up sheds made of bamboo and shade net for summer.

May 2021: Samyukta Kisan Morcha, an umbrella body of over 40 protesting farmer unions, writes to PM Modi, urging resumption of talks over the three farm laws they have been agitating against at Delhi borders since November last year. On May 27, Farmers observed a ‘black day’ to mark six months of the agitation, and burned effigies of the government.

August 2021: Haryana Police on August 28 lathi-charged a group of farmers disrupting traffic on the national highway while heading towards the venue of a BJP meeting.

September 2021: On September 7, farmers reach Karnal in large numbers and laid siege to the mini-Secretariat in Karnal. Bringing to an end the five-day standoff between farmers and the Karnal district administration, the Haryana government on September 11 agreed to conduct a probe.

October 2021: Supreme Court observed that it was not against people’s right to protest even on matters that are sub judice, but made it clear that such protesters cannot block public roads indefinitely. Later, on October 29, Delhi Police started removing barricades from the Ghazipur and Tikri border.