Pegasus issue 'not based on facts,' no point in raising it again: Union minister Mukhtar Naqvi to Congress ahead of Winter session 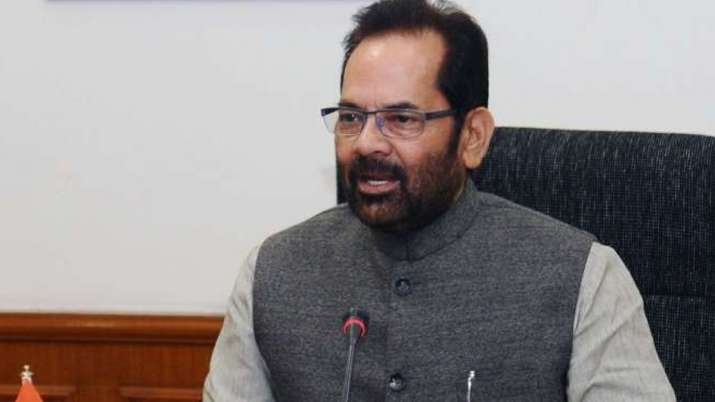 With the Congress set to raise the Pegasus snooping allegations in Parliament again, Union minister Mukhtar Abbas Naqvi on Sunday said what is the point of disrupting the House over issues that are "not based on facts", and also asserted that the Opposition should avoid linking the upcoming Winter session with assembly polls.

The deputy leader of Rajya Sabha said the government is ready to discuss and debate all issues on the basis of the decision of the chair in Lok Sabha and Rajya Sabha.

In an interview with PTI, Naqvi also took a dig at the Congress over disruptions in previous parliamentary sessions, saying that in the last seven years, Prime Minister Narendra Modi has established that "democracy delivers" and "dynasty disturbs".

Asked about the Opposition unity during the last session of Parliament, he said the BJP and Prime Minister Modi believe that there should be a "mazboot (strong)" not "majboor (helpless)" Opposition, but unfortunately in their scramble to lead the Opposition, the influence of such parties is getting diminished.

"They should unite on issues. Last time they united just to disrupt," he said.

The Cabinet Committee on Parliament Affairs has recommended that the Winter session of Parliament be held from November 29 to December 23, according to sources.

Asked about the Congress' assertion that it will raise the Pegasus snooping allegations in Parliament again, Naqvi said what they have decided is not important, whatever is decided with unanimity, the government will stand by that.

"Till when will they drag their stories and tales about spying. There is no point of raising it. These are issues that are not based on facts or logic. So, if you want to disrupt the House over illogical issues, it is up to you," the Minority Affairs Minister said.

Hitting out at the Congress, Naqvi said, "We were ready to discuss price rise last time, we also fixed the time. Pegasus has been discussed many times and they have been exposed every time." The Supreme Court has given its verdict and also other agencies have made their stand clear but the problem with the Congress is that it is "the James Bond of spying", the minister said.

When in Opposition, the Congress creates a "hullabaloo" over spying and when in power it spreads a "web of surveillance", Naqvi alleged.

The Congress' history is such that they have even spied on their own home minister and finance minister, he claimed.

"So, all this is fake and fabricated but despite that whatever the chair decides, will be discussed," he added.

Last month, after the Supreme Court order appointing a three-member panel of cyber experts to probe the Pegasus snooping allegations, former Congress chief Rahul Gandhi had asserted at a press conference that the party will raise the issue again and will try to have a debate in Parliament.

Naqvi stressed that the government maintains a constant line of communication open with the Opposition for the smooth functioning of the House.

Asserting that in the previous sessions the Opposition has been found linking the Parliament session with assembly polls, he said if this continues justice will not be done to parliamentary responsibilities.

"What we have seen traditionally is that Opposition raises issues, there is an all-party meeting and there is a business advisory committee meeting on it to decide, but unfortunately even last time, Parliament session happened close to assembly polls and this time also it is closer to 4-5 assembly polls. If we see the session by linking it to polls we will not be able to do justice to our parliamentary duties," he said.

Naqvi hoped that the discussions would take place on all important issues and the upcoming Winter session would be productive.

He alleged that till now it has been seen that the Opposition sees parliamentary sessions by linking it with polls.

"Problem is that they do not have support on the ground and that is why they create a furore inside the House," he said, hitting out at the Opposition.

On the unruly scenes witnessed in Rajya Sabha on the last day of the Monsoon session, the Rajya Sabha deputy leader said the issue is before the chair and will be decided by it.

"Our appeal is that our Parliament and parliamentary democracy are the strongest in the world and we should not do anything that harms it," Naqvi said.

Asked about the farmers' protests and the announcement that they would march to Parliament during the Winter session, Naqvi said the government was always open to dialogue and had never put a "no talks" board for the farmers.

"We appeal to (farmer leaders) to listen, till when will you keep getting exploited. The political parties that are exploiting you are not for your or for farmers welfare," he said.

Naqvi said that in the name of farmers, some people for their own benefit have "hijacked this agitation".

He said there were three main farmers' issues, which have been "resolved"

"The government has talked about the guarantee of MSP a 1,000 times, both inside and outside Parliament. Then there was the issue of protection of 'Mandis'. 'Mandis' were, are and will remain protected and are flourishing. And, finally the protection of the farmers' land has been guaranteed in the farm laws. These issues have been resolved," Naqvi said.

"Some people want to create confusion, spread fear and misinformation. The government has played its role both inside and outside Parliament (on the farmers' issues)," he added.