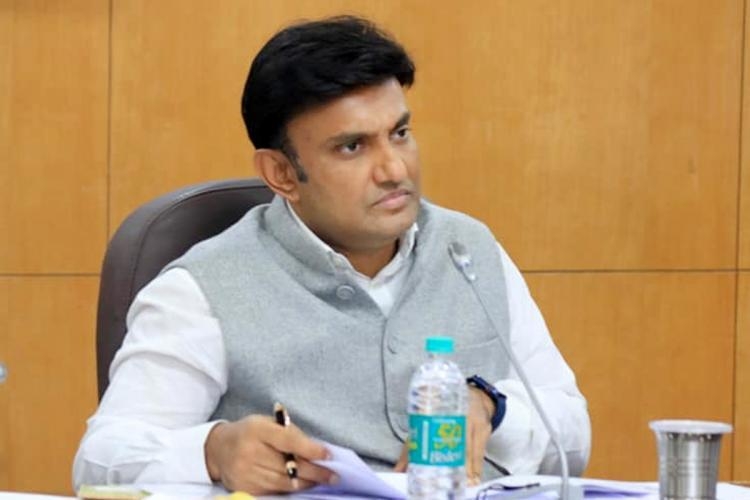 Bengaluru (Karnataka): Karnataka Health Minister K Sudhakar on Thursday said the Padayatra by Congress has indeed led to a surge in COVID-19 cases.

Speaking to the media at Vikasa Soudha here, Sudhakar said, "Government constantly tried to persuade Congress to stop padayatra. The government handled this situation in a very mature manner without the use of force like lathi-charge or arrest. Padayatra has indeed led to surge in cases and Congress is responsible for this." Sudhakar appreciated Congress for calling off padayatra in the interest of the health and safety of citizens.

He further said that several thousands of innocent people participated in the padayatra. "We are yet to see how it has spread the COVID infection." "The government did not stop padayatra by brute force, but we tried to convince them that this is not an appropriate time to hold padayatra amid the third wave. The irresponsible statements made by Karnataka Pradesh Congress Committee (KPCC) president DK Shivakumar has hurt the morale of COVID warriors from IAS officers to a front line worker," said the minister.

The Health Minister said that Chief Minister BS Bommai has a very deep understanding and knowledge of irrigation issues and he is very well aware of what needs to be done to benefit the state.

He urged the opposition to join hands with the government on such inter-state water issues.

"Opposition should join hands with the government in such inter-state water issues. UP Congress has cancelled all political rallies despite elections. Karnataka Congress should also have postponed Padayatra similarly," he added.

"The government has lodged FIR and issued notices to all those who have violated COVID norms. Chief Minister has managed the situation very sensitively without giving room for any violence. Mekedatu is an interstate issue and Tamil Nadu has approached Supreme Court. Ruling DMK is a UPA alliance partner and if Congress high command is really concerned about Karnataka it could have discussed with Tamil Nadu Chief Minister to withdraw the case," said Sudhakar.

"While the doubling time in the first wave was 10-12 days, it was 8 days during the second wave. But in the third wave, the cases are doubling every 2 or 2.5 days. Between January 1-11, there were 62,641 active cases and about 6 per cent of them were in the hospital, 1 per cent in COVID care centres and the rest 93 per cent were in home isolation," he said.

The Minister further said that therefore, it is important for everyone to get both doses of vaccine.

"We have set a target of at least two lakh tests per day and we will increase it further. About 1 lakh tests are being done in Bengaluru. About 265 labs are operational in the state and there are 9 genomic labs including 5 state government and 4 central government labs. We have a capacity to sequence 1,875 samples in one batch," the minister said.

"665 oxygen beds and 263 ICU beds have been added in 19 district hospitals at a cost of Rs 25 crores. 217 out of 266 PSA oxygen plants allotted to Karnataka are operational. 3,460 ventilators and 8,100 oxygen concentrators are available," he said.

Further speaking on treatment for children, he said that 30 per cent of the beds in the district have been reserved for the treatment of children.

"Indira Gandhi Children Hospital has been notified has designated hospital for paediatric care. Tests are being conducted in schools once every 15 days," he added.