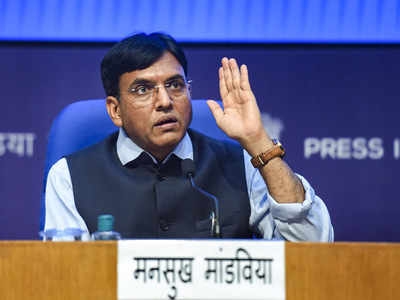 Union Health Minister Mansukh Mandaviya on Tuesday urged resident doctors to call off strike in public interest who have been protesting over NEET PG Counselling.

Dr Mandaviya today met the representatives of doctors' association at Nirman Bhawan, a day after police crackdown on the protesting doctors.

A 13-member team comprising three doctors from Ram Manohar Lohia Hospital, two from Lady Harding, one from LNJP, two from Safdurjung hospital, two GTB hospital, two FORDA and one from FIAMA, met the minister over their ongoing protest against the delay in NEET PG counselling 2021.

After holding the meeting, the union heath minister while addressing the media said, "We're not able to do the counselling because the matter is sub-judice before Supreme Court and the hearing will take place on January 6. "I hope that NEET PG counselling will start soon," he added.

The doctors are also demanding an apology from police for their action against them on Monday during the protest.

Earlier, the doctors' protest created a chaos-like situation across hospitals in the capital city as all counters were shut down for the patients.

Yesterday, the protesting doctors had called for total shutdown of medical services in the hospitals after the police action.

Meanwhile, the Resident doctors' association of AIIMS has decided to withdraw all non-emergency services from today if no steps are taken by the government.

The RDAs across the nation have been protesting since November 27 against the multiple postponements of the NEET PG Counselling 2021 and the subsequent admission of the fresh batch of resident doctors in the medical colleges.

Federation of All India Medical Association (FAIMA) has called for complete withdrawal from all healthcare services across the country from 8 am on December 29 "in protest against brute force by Delhi Police against doctors."

Resident doctors of Swami Dayanand Hospital, Dilshad Garden also warned to withdraw from all non-emergency (OPD, wards, elective OT) services with immediate effect and Emergency from December 29, over their demand for the expedition of NEET-PG counselling.