HomeIndiaMizoram: Champhai district is now a hotspot for wildlife trafficking in India

Mizoram: Champhai district is now a hotspot for wildlife trafficking in India

Mizoram: Mizoram police on Friday rescued three exotic wildlife species in an operation against illegal smuggling of wildlife species, said the police. According to the police, the animals were suspected to be smuggled from Myanmar.

"Three exotic wildlife species were rescued at Tuisenphai Checkgate from a vehicle and two people, Vanlalrosiama (25) and C Liankunga (52) hailing from Champhai district, were arrested. The animals are believed to have been brought from Myanmar," the police said.

"We will never let our guards down against smuggling of wildlife species as their preservation and protection is one of our top priorities and responsibility," Mizoram police said.

Rescued species include two spider monkeys (female with a baby) and one Indri Lemur. The rescued endangered wild animals and the vehicle were handed over to Customs Preventive Force in Champhai.

We will never let our guards down against illicit smuggling of wildlife species as their preservation & protection is one of our top priority and responsibility.
Today, #KhawzawlPolice at Tuisenphai Checkgate rescued 3 exotic wildlife species, suspected to be smuggled from (1/3) pic.twitter.com/C3y7HyvRJN

Prior to this, there have been many such smuggling cases. The Champhai district of Mizoram has become a new hotspot for the wildlife trade, many animals have been smuggled into Myanmar since the military regime took office.

On May 25, one of the SUVs stopped at the control gate of the Kankan police in the Champhai district generally, such cars are empty on the way to the Champhai district. Police questioned the driver, who said passengers boarded a taxi en route because of this link police have managed to intercept one of the largest smuggling of exotic animals seized in northeastern India.

The seizure occurred at Chalbawiha Junction near the control gate, police arrested Gospel Chanchintha from Hmunlai in Lawngtlai district and his four accomplices from Zokhawthar in Champhai.

The defendants intended to sneak past the checkpoint on foot after crossing the Tiau River with boxes of illegal animals on their heads. Species seized included four sloths, 4 turtles, four pots (monkeys found in tropical Africa), four turtles, 442 lizards, eleven snakes, two beavers and one wildcat.

by walking on foot and carrying the smuggled exotic species by head-load.
However, alertness, sharp vigil and presence of mind of our police personnel on duty could not be outsmarted.
Rescued species includes - 4 nos of Tortoise, 11 nos of Snakes, 442 nos of Lizards, pic.twitter.com/SyPUrQhIel

(468) of various exotic wildlife species, being illegally smuggled by Gospel Chanchintha-a (28) s/o Thangalha of Hmunlai, Lawngtlai District and his four accomplices from Zokhawthar, Champhai District.
The illegal traffickers tried to cross over and evade the Police Check-gate pic.twitter.com/ZMoQvXCKJu

It was two weeks prior to this incident, another significant exotic wildlife seizure took place at the same location. Among those rescued were 4 white cockatoos, eight guinea pigs, five monitor lizards, three kangaroo rats, two Burmese pythons and one meerkat.

Kangkaung Check Gate is located on National Highway 6, connecting Champhai and the state capital Aizawl, about 30 kilometers from the India-Myanmar border.

Wildlife smuggling across the porous border between India and Myanmar continues to spread. However, since the pandemic, it has seen a new trend of smuggling alien species found in Africa, Australia, South America and India via Myanmar.

In the past, Moreh, an India-Myanmar border town in the Chulachanpur district, was a major shipping route for contraband, including wildlife. The hilly district in the northeast corner of Mizoram, Champhai, or 'The Bowl of Mizoram', borders Myanmar from the east and south, from the immigration checkpoint of Dzokhawthar, where a bridge over the Tiau river separates India and Myanmar.

Champhai is seen as a gateway for smuggled goods from Myanmar to India, including drugs, areca nuts, foreign tobacco, and wildlife. Assistant Chief of Police C. Lalingliana said many poor people have been living hand to mouth since the exodus of Myanmar citizens to India after the coup. 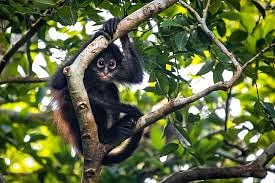 Delhi Crime: Video of youth being stabbed to death by 3 in Sunder Nagri surfaces