Sonia Gandhi was reviewing the efforts by the states ruled by the Congress to tackle the second wave of the coronavirus infection after the country saw a record 1,45,384 fresh COVID-19 cases and 794 deaths on Saturday

Congress president Sonia Gandhi accused the Centre on Saturday of "mismanaging" the COVID situation and creating a vaccine shortage in the country by exporting it, as she called for cancelling all public gatherings and poll rallies in view of the rising number of coronavirus cases. Addressing a virtual meeting with the chief ministers of the Congress-ruled states and ministers of the party in states where it is in power in alliance with others, she said the priority should be to test, track and vaccinate.

She was reviewing the efforts by the states ruled by the Congress to tackle the second wave of the coronavirus infection after the country saw a record 1,45,384 fresh COVID-19 cases and 794 deaths on Saturday. Former Congress chief Rahul Gandhi, Rajasthan Chief Minister Ashok Gehlot, his Punjab counterpart Amarinder Singh and Chhattisgarh counterpart Bhupesh Baghel were among those who participated in the meeting.

Rahul Gandhi called for putting money in the hands of the poor. While Singh pointed out that Punjab's vaccination stock will last for five more days, Baghel said Chhattisgarh will run out of the vaccine stock in three days. Gehlot said the Centre should not see the states ruled by other parties as adversaries.

The Congress chief also reviewed the efforts to fight COVID-19, including the availability of vaccines, access to medicines and ventilators, chief spokesperson of the party Randeep Surjewala said.

"The (Narendra) Modi government has mismanaged the COVID situation. It has exported the vaccines and allowed a shortage to be created in India," the Congress chief said at the meeting. She said all public gatherings and poll rallies should be cancelled as the number of COVID-19 cases is on the rise.

"Mass gatherings for elections and religious events have accelerated COVID for which all of us are responsible to some extent. We need to accept this responsibility and keep the interest of the nation above our own," Sonia Gandhi said. Rahul Gandhi expressed concern over the second wave of COVID-19 hitting the country.

He urged the government to look at new mutations, which are the source of the second wave, and called for joining hands and energies, instead of complacency and premature victories. He also pointed towards a direct connection between the spread of the infection and nutrition and livelihood. He said the virus attacks the poorest and disadvantaged the hardest, as he reiterated his demand for a "basic income support" by the government.

Surjewala said the Punjab chief minister has pointed out a vaccine shortage.

"He candidly points out that the Central government has given no assurance of numbers and supply," he wrote on Twitter. Surjewala also said Gehlot has pointed out that the shortage of the vaccines is a reality that cannot be wished away.

"Pointing to the spurt in infections, he states that the Centre must take States on board as stakeholders and not as adversaries," he said. Quoting Baghel, Surjewala said he underlined the steps taken by the Chhattisgarh government to fight COVID-19 and pointed out that the state has only three days of vaccine stock left.

In her introductory remarks, Sonia Gandhi said the number of coronavirus cases is going up and as the principal opposition party, it is the responsibility of the Congress to raise issues and push the government to move away from "PR tactics" and act in the interest of people.

"We must focus on India's vaccination drive first and foremost, then only export vaccines and gift them to other countries. We must stress on responsible behaviour -- adhering to all laws and COVID regulations without an exception," she said.

The Congress chief said cooperation with the states is showing respect to federalism and it is equally important for the states to be constructive and cooperate with the Centre in its efforts to fight the pandemic. "We are all united in this fight," she said.

Sonia Gandhi said strict measures need to be taken in the Congress-ruled states to ensure that the pandemic does not go out of control and large-scale testing, preparation of adequate facilities and setting up temporary ones should be ensured.

"We must make all efforts to support those who face the brunt of reduced economic activity as the restrictions become harder and more stringent," she said. "Is there enough vaccine available? Has the central government been cooperative? What are our states doing to ensure the availability of oxygen, ventilators and other facilities as the pandemic grows? "What are your views on another lockdown? What about the economic fallout? How bad is the situation in your state? Should public gatherings, including election rallies, not be cancelled?" she asked.

Stating that various packages have been announced by the Centre to help MSMEs and stimulate the economy, the Congress chief asked, "What impact have these packages had and what more should the government be doing to deal with the continuing crisis? Do you see economic recovery happening in the manner that is being officially claimed?" "According to our discussion on COVID, I would like to be briefed on the latest situation regarding the agitation of farmers that has been going on for well over five months now.

"The Congress-ruled states have passed their own laws but those have not received the presidential assent. What more should we do even though the keys to the solution are with the Centre, which has created the problem in the first place," she said. 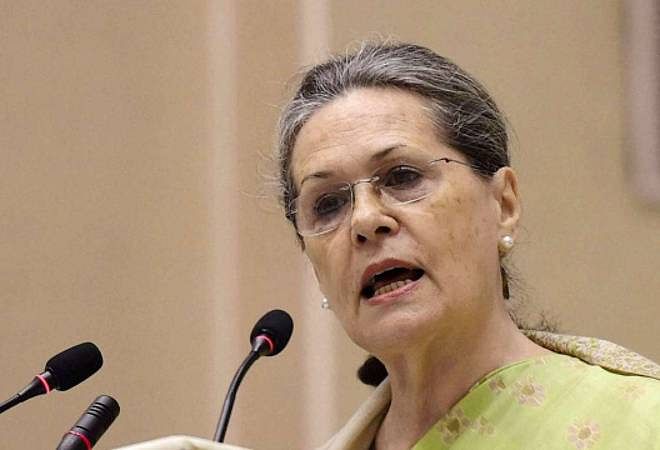