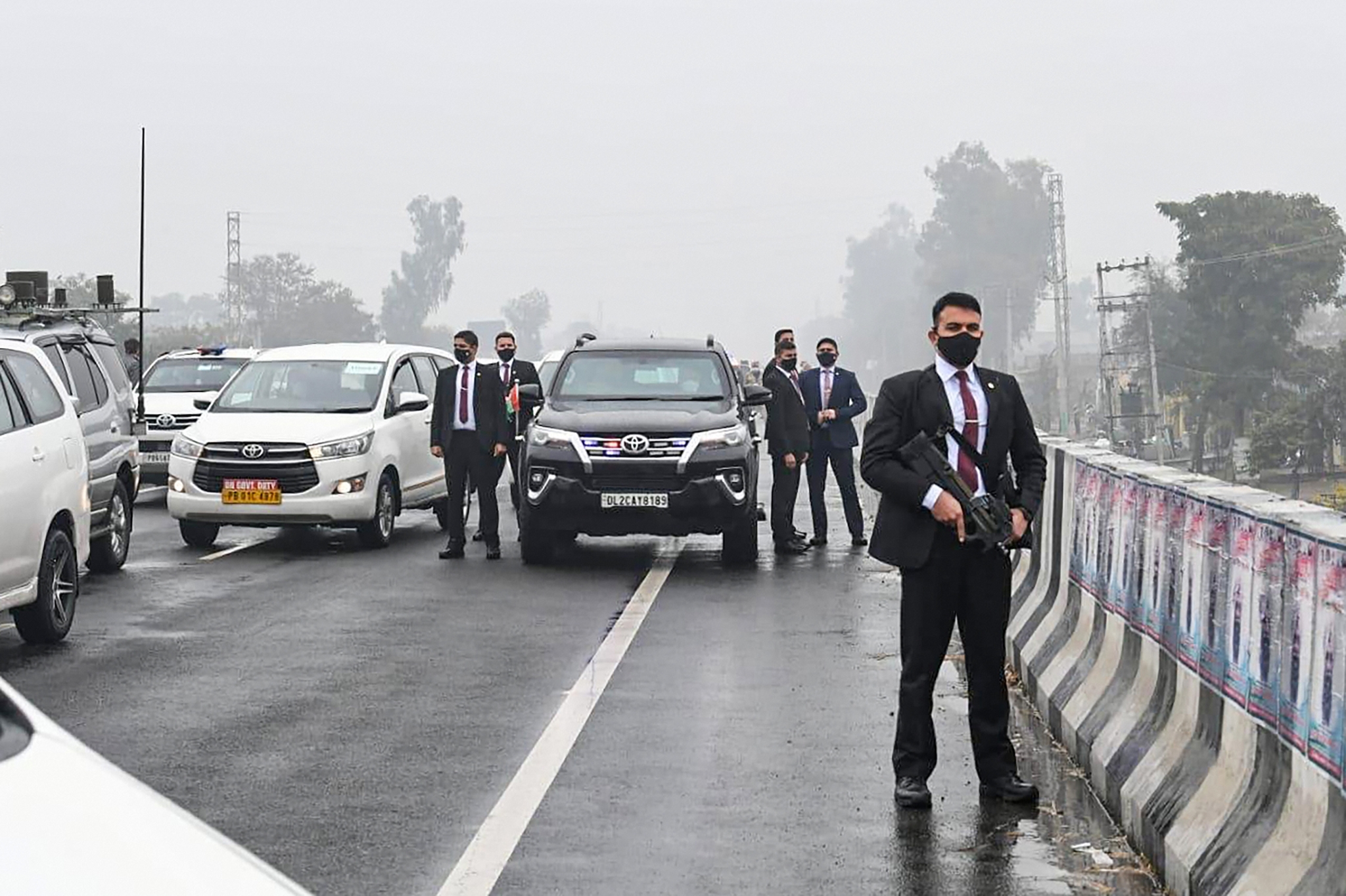 In a "major security lapse", Prime Minister Narendra Modi was stuck on a flyover in Punjab for 15-20 minutes on Wednesday due to blockade by some protesters and returned without attending an event at a martyrs' memorial. Reacting sharply, the Union Home Ministry asked the Punjab government to fix responsibility for the serious lapse and take strict action. The PM also could not attend a rally in Punjab's Ferozepur.

According to a ministry statement, the PM landed this morning at Bathinda in Punjab from where he was to go to the national martyrs' memorial at Hussainiwala by helicopter. Due to rain and poor visibility, he waited for about 20 minutes for the weather to clear. "When the weather did not improve, it was decided that he would visit the national martyrs' memorial via road, which would take more than two hours. He proceeded to travel by road after necessary confirmation of security arrangements by the DGP Punjab Police," the statement said.

Around 30 kms away from the national martyrs memorial in Hussainiwala, when Modi's convoy reached a flyover, it was found that the road was blocked by some protestors. "The Prime Minister was stuck on a flyover for 15-20 minutes. This was a major lapse in the security of the Prime Minister," the statement said.

Meanwhile, politicians had different views on the incident.

BJP chief J.P. Nadda said that fearing a resounding defeat the Congress Government tried all possible tricks to scuttle the Prime Minister's programmes in the state.

In a series of tweets, Nadda said, "Fearing a resounding defeat at the hands of the electorate, the Congress Government in Punjab tried all possible tricks to scuttle the PM @narendramodi Ji's programmes in the state."

Referring to the security breach, Nadda said, "What is extremely worrisome is that this incident was also a big security lapse as far as the PM is concerned. Protesters were given access to the Prime Minister's route while the Punjab CS and DGP gave assurances to SPG that the route is clear."

Karnataka Chief Minister Basavaraj Bommai condemned the breach of security and the blockage of Prime Minister Narendra Modi's cavalcade, and said that state needs to be concerned about its future.

He also targeted his Punjab counterpart Charanjit Channi over the incident.

"We condemn the breach of security and the blockage of our PM Narendra Modi Ji's road cavalcade in Punjab. But what's equally condemnable is the irresponsible statement by CM Charanjit Channi who has called it a natural happening. If this is your idea of law and order, Punjab truly needs to worry about its future," Bommai said in a tweet.

Assam Chief Minister Himanta Biswa Sarma said the 'security lapse' in Prime Minister Narendra Modi's travel in Punjab is a matter of serious concern and demanded an enquiry into it at the highest level.

The incident is a matter of shame and proved that the ruling Congress in that state is interested only in politics and not development, he said.

Sarma in a series of tweets said "compromising" the security of the prime minister is a matter of serious concern and must be enquired into at the highest levels.

He wrote, "It's a matter of shame that Adarniya PM Shri @narendramodi ji's cavalcade (sic) was stopped by protesters on his way to visit the martyr's memorial at Hussainiwala, Punjab." Accusing the Congress government of Punjab of indulging in politics on all issues, Sarma, a prominent BJP leader of the north east, wrote, "While Adarniya PM is going all out to ensure holistic development of Punjab, today's incident shows how Cong is least interested in development & only wants to play politics.

"The fact that Punjab CM didn't address the issue makes matters even worse in the crucial border state," he added.

Amarinder said Channi government had utterly failed in ensuring law and order in the state.

"If we have to keep our state safe and keep law and order system here, then I think President's rule should be imposed," the Punjab Lok Congress chief told the media after addressing a rally here, which was also scheduled to be addressed by Modi.

Posting a video of rain playing spoilsport at Prime Minister Narendra Modi's rally, Congress Lok Sabha MP Manickam Tagore said that this was the real reason but the BJP blamed the state's first Dalit chief minister for the incident.

In a tweet Tagore said, "Real reason for cancellation but Shah and Nadda says lies and wants to blame a first Dalit CM of Punjab is it fair? #ModiInPunjab." The video shared by the Congress leader showed that the Prime Minister's rally was cancelled as rain played spoilsport following which a thin crowd gathered at the rally venue.

Congress spokesperson Randeep Surjewala also said that there was no crowd in Ferozepur where the Prime Minister was scheduled to address the gathering, so the visit was cancelled.