New Delhi: The Supreme Court on Sunday asked Solicitor General Tushar Mehta to place before it on Monday morning the letters of Maharashtra Governor recommending revocation of President's rule in the state and inviting Devendra Fadnavis to form government.

In the special hearing on a holiday, the apex court also issued notices to the Centre, Maharashtra government on the petition filed by Shiv Sena-NCP-Congress combine against the Maharashtra Governor's decision to swear in Fadnavis as chief minister. A bench of Justices N V Ramana, Ashok Bhushan and Sanjiv Khanna also issued notice to Fadnavis and Dy chief minister Ajit Pawar.

The bench declined fervent request of Mehta seeking two days time to place Governor Bhagat Singh Koshyari's communication on record and asked him to produce letters by Monday at 10:30 am when the matter will be taken again. Senior advocate Kapil Sibal and A M Singhvi, appearing for the combine, told the bench that floor test be conducted today itself so that it can be ascertained that Fadnavis enjoys majority in the house. They maintained that post-poll alliance of the three parties have the majority in the 288-member house. 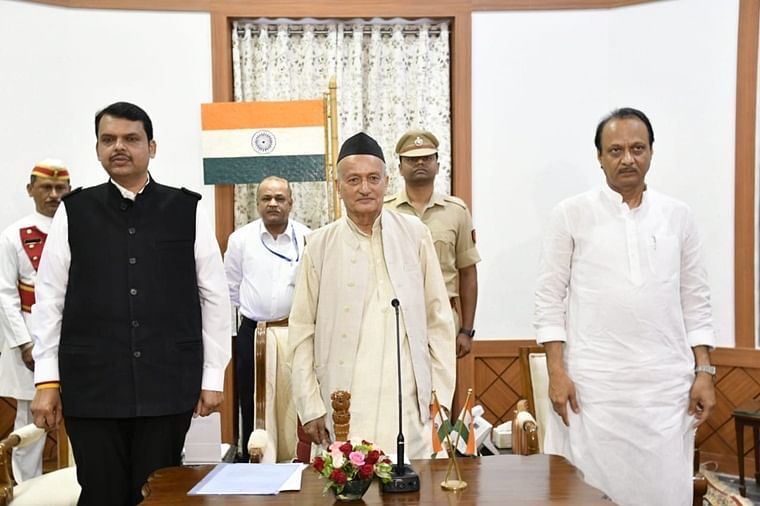 Maha politics for beginners - what is Rule 12, Article 356 and how it was used by Modi govt

While Sibal termed as 'bizarre' the Governor's decision to revoke President's rule and anoint Fadnavis as the chief minister, Singhvi said it is a "murder of democracy". Senior advocate Mukul Rohatgi, appearing for two BJP MLAs and some independents, questioned the maintainability of the writ petition filed by the combine and said they should have approached the Bombay High Court.

At the outset, the Shiv Sena-NCP-Cong combine asserted that they have the majority in the Maharashtra Assembly and if Fadnavis has the numbers he should prove majority on floor of the House. The combine also said that it was 'betrayal and annihilation' of democracy that government has been allowed to be formed when 41 NCP MLAs are not with the BJP. "If Devendra Fadnavis has numbers to prove majority, let him prove it on the floor of House, else we have numbers to form government in Maharashtra," Sibal said.

Singhvi submitted that 41 MLAs of NCP are with Sharad Pawar. While 54 is the total strength of NCP, 41 MLAs wrote to the Maharashtra Governor saying Ajit Pawar has been removed as its leader, Singhvi told the bench. Sibal said that November 30 deadline given by the Governor to the ruling party to prove majority is meant to do 'something else'. "It is a complete 'betrayal and annihilation' of democracy where government has been allowed to be formed when 41 NCP MLAs are not with them," they submitted.

The top court said none is disputing that floor test is the best method to show majority. Rohatgi said how can a political party approach apex court under Article 32 for violation of Fundamental Rights. "They (three parties) were given time but they did not form government, so let Fadnavis prove majority as there was no tearing hurry, Rohatgi told the bench. Singhvi referred to judgements in various cases including dismissal of the Uttarakhand Cong govt, saying that floor test is ultimate test.

He also referred to the 2018 apex court's order in Karnataka case and said floor test was ordered and there was no secret ballot. "Floor test is Constitutional obligation, no formality is needed and it can be ordered," Singhvi told the bench. Rohatgi further said that the Governor's decision to invite political party is not open to judicial review as it is his discretionary power. "What governor did yesterday is immune from any judicial review, choice of party is with him," Rohatgi said.

He said Floor test is ultimate and 2-3 days time should be given to prove majority. Rohatgi submitted that even orders of Governor have not been filed and the plea filed by the combine is without any documents and annexures. He also said that Governor or President has some discretion and immunity under Article 361 to choose a person who stakes claim and appoint him as the chief minister or the Prime Minister. "Every party should be allowed some time to respond to plea and allow us to spend Sunday peacefully," Rohatgi said concluding arguments.