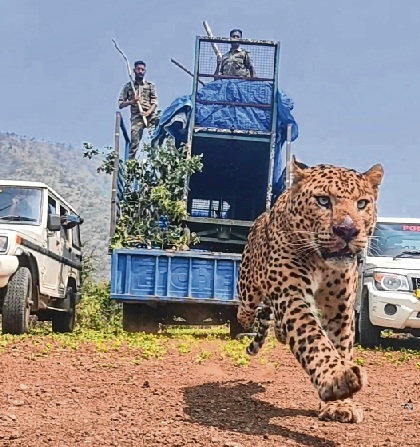 The leopard, which was frequenting habitats near Maduraikkarai in Coimbatore district and attacking livestock for food, was captured by the Forest Department in a cage, in which a live bait was kept, early on Saturday morning.

“We laid the trap for the big cat after following due process and permission from Chief Wildlife Warden for its translocation,” said the Coimbatore District Forest Office D Venkatesh.

Hours after it was captured, the forest officials took the cage, loaded onto a mini-van, and taken to the Thengumarahda Forest in Sathyamangalam Tiger Reserve in the afternoon. As the forest personnel lifted the door of the cage, the leopard made a giant leap to liberty and this was captured on a camera placed at the ground level. The image of the leaping leopard soon went viral on social media platforms with people hailing it as a moment of cherished freedom. Some of those who tweeted out the photo said they had garnered thousands of likes from Twitterati who were awestruck by the image.