External Affairs Minister S Jaishankar on Wednesday firmly conveyed to his Chinese counterpart Wang Yi that the prolongation of the existing situation in eastern Ladakh was visibly impacting the bilateral ties in a 'negative manner' and rued that there was no forward movement from the Chinese side since the disengagement in Pangong lake areas in February that had created conditions for resolving the remaining issues.

During a one-hour meeting on the sidelines of an SCO conclave in Dushanbe, the external affairs minister also told Wang that any unilateral change in the status quo along the Line of Actual Control (LAC) was 'not acceptable' to India and that the overall ties can only develop after full restoration of peace and tranquillity in eastern Ladakh. The two foreign ministers agreed to hold the next round of military dialogue at the earliest and that it should discuss all the remaining issues and seek a mutually acceptable solution, according to the Ministry of External Affairs.

The in-person meeting took place in the midst of a stalemate in the disengagement process between the two militaries in remaining friction points in eastern Ladakh after they withdrew troops and weapons from the Pangong lake areas in February following series of military and diplomatic talks to resolve the standoff. “The External Affairs Minister recalled both sides had agreed a prolongation of the existing situation was not in the interest of either side. It was visibly impacting the relationship in a negative manner,” the MEA said in a statement.

Assessing the overall relationship, Jaishankar emphasised that maintenance of peace and tranquillity in the border areas has been the foundation for the development of ties since 1988.

“The attempts to change status quo last year that also disregarded commitments under the 1993 and 1996 agreements have inevitably affected ties. He emphasised it was, therefore, in mutual interest the two sides work towards early resolution of the remaining issues along the LAC in Eastern Ladakh, while fully abiding by bilateral agreements and protocols,” the MEA said.

There has been no attempt by the Indian or the Chinese side to occupy the areas in eastern Ladakh from where they disengaged in February and both sides are involved in talks to resolve the remaining issues in the region, the Indian Army said on Wednesday.

The Army said it has been monitoring activities by the Chinese People’s Liberation Army (PLA) including turn­over of troops in the region.

The Army stated this in a statement trashing a media report which claimed the Chinese military has again crossed the Line of Actual Control (LAC) in eastern Ladakh at several places and that there has been at least one incident of clash between the two sides. “Ever since the disengagement agreement in February this year, there has been no attempt by either side to occupy the areas from where the disengagement had been undertaken. There have been no clashes in Galwan or any other area, as reported in the article,” the Army said.

It also said the report mentioning that agreements with China have collapsed is “false and baseless”.

“Both sides have continued with negotiations to resolve the balance issues, and regular patrolling in respective areas continues. The situation on the ground continues to be as hithertofore. PLA activities, including turnover of troops, continue to be monitored by the Indian Army," the Army said.

About the Indian media report, Chinese Foreign Ministry spokesman Zhao Lijian in Beijing said, “I am not aware of the situation you mentioned.”

Meanwhile, Despite the Indian Army’s rebuttal, Congress leader Rahul Gandhi on Wednesday raked up media reports, which suggest India and China have clashed again in the Galwan valley like the violent face-off that took place at the same place on June 15 last year, in which 20 Indian soldiers lost their lives. “GOI’s use of foreign and defence policy as a domestic political tool has weakened our country. India has never been this vulnerable,” Rahul Gandhi tweeted along with the screenshot of the media report. 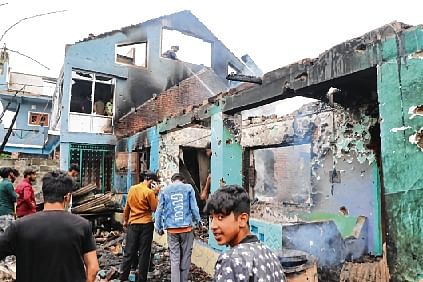 A view of a house damaged in an encounter between the security forces and militants in Pulwama, south Kashmir. | —Sajad Hameed / FPJ

A Pakistani commander of Lashkar-e-Tayyeba (LeT) and his two local accomplices were killed in an encounter with security forces in Pulwama district of J&K on Wednesday, police said. IG of Police, Kashmir, Vijay Kumar congratulated the security forces for the operation.

“Pakistani LeT commander Aijaz alias Abu Huraira has been killed along with two local terrorists. Congratulations to the police and security forces,” he tweeted.

A police spokesman said a cordon and search operation was launched on Tuesday night by security forces following input about the presence of terrorists in Pulwama town.

“During the search operation, the civilians were evacuated to safer places and as the presence of terrorists got ascertained, they were given an opportunity to surrender. However, they fired indiscriminately upon the joint search party, which was retaliated leading to an encounter,” he said.

He said the operation was suspended due to darkness but the cordon remained intact. “Taking advantage of darkness terrorists tried to escape but failed. In the wee hours, repeated announcements were again made to hiding terrorists to surrender, but they again fired on the joint search party and the fire was retaliated,” the spokesman added.

In the ensuing gunfight, he said, three terrorists of LeT were killed and their bodies retrieved from the encounter site. “They have been identified as LeT commander Aijaz alias Abu Huraira, a resident of Pakistan, Javeed Ahmad Rather, a resident of Tahab Pulwama and Shahnawaz Nazir Ganie, a resident of Samboora Awantipora,” the spokesman said.

The Uttar Pradesh Police on Wednesday arrested three more alleged terrorists of the Al Qaeda-linked Ansar Ghazwatul Hind, a senior official said. The arrested ultras are Shakeel, a Lucknow’s Wazirganj resident; Mohammad Mustqueem of Muzaff­a­rnagar and Mohammad Moid of New Haiderganj, Campwell Road, Lucknow. Earlier on July 11, the UP ATS had arrested Minhaz Ahmed and Musheeruddin. The ATS had claimed they were planning explosions, including using "human bombs" at several places in UP. “On their tip-offs, some persons were called for probe by the ATS. The three were arrested after they accepted their involvement with the two arrested earlier,” Additional Director General (Law and Order) Prashant Kumar said. About the role of the three, the ADG said Mustqueem had the knowledge of the conspiracy and had helped Minhaaz and Musheeruddin. Moid had made a pistol available to Mustqueem through Minhaaz. Shakeel helped Minhaaz in arranging the arms, Kumar said, adding that the three will be produced in a court for further action.