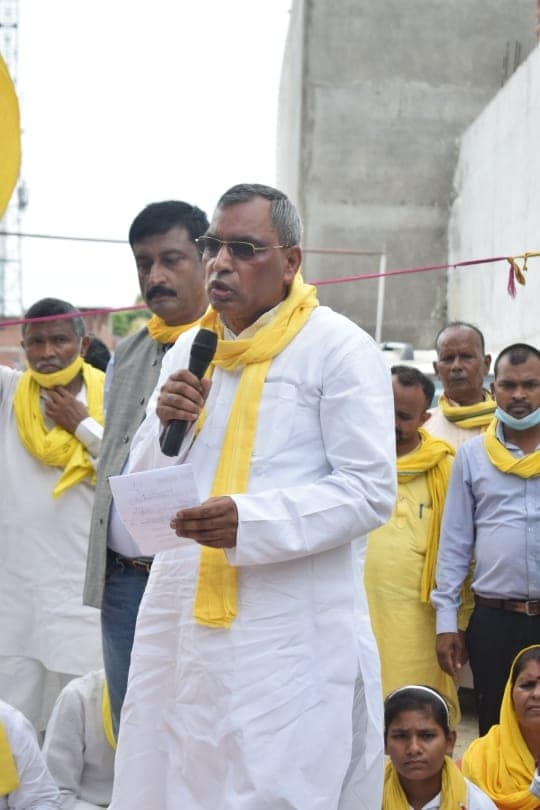 Lucknow: The bitterness it seems is diluting. Old friends turned foe, Om Prakash Rajbhar may come to the Bharatiya Janta Party (BJP) fold again. If the meeting of Rajbhar with the UP BJP president Swatantra Dev Singh is any indication both may join hands again.

On Tuesday, the president of Suheldeo Rajbhar Bhartiya Samaj Party (SBSP) in UP, Om Prakash Rajbhar met his counterpart in BJP. The meeting continued for over an hour and both the leaders discussed various issues including the coming assembly elections in UP. In his brief statement after meeting, Rajbhar said that everything is possible in politics….(Kuch Bhi Ho Sakta Hai). The state BJP president Singh refused to make any comment however a senior party leader admitted that both the parties might come together again.

In the last assembly polls, SBSP was a partner with BJP and had won four seats. It was given eight seats to contest in the 2017 assembly polls under the BJP alliance. Prakash Rajbhar was made minister in the Yogi cabinet but was expelled before the 2019 parliament election after relations went soar over seat-sharing. In the recently held panchayat election of UP Rajbhar extended support to Samajwadi Party at many places.

After severing its tie with BJP in the 2019 parliament elections, SBSP had formed an alliance of smaller parties in the name of Bhagidaari Morcha of which Owaisi’s AIMIM was also a part. Later, Om Prakash Rajbhar was seen supporting Samajwadi Party on many occasion. The SP chief Akhilesh Yadav too had intended to form electoral alliance with the SBSP.

However, in June this year, BJP central leadership decided to woo small caste-based parties in UP in the wake of coming assembly polls and dialogues were opened with SBSP. Initially, Rajbhar gave a cold shoulder to BJP’s move and did not even respond to the calls made by BJP national president JP Nadda. However, later on he was persuaded for Tuesday’s meeting by the UP BJP vice-president Daya Shankar Singh.

According to political analysts, the SBSP joining hands with BJP could be a severe jolt to opposition, which has been trying to bring smaller parties under its umbrella. Om Prakash Rajbhar led SBSP represents Rajbhar community which has a considerable number of votes in over three dozen assembly segments mainly in the east UP.