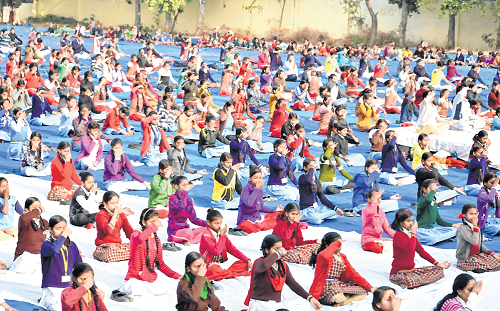 The BJP government's move to conduct ‘Surya Namaskar’ in all schools and pre-university colleges across Karnataka has kicked up a row. Several institutes have accused the government of trying to saffronise school education and divide students along communal lines.

Following the Centre’s directive, the state government issued a circular on Dec 12 instructing schools and colleges to hold Surya Namaskar sessions during the morning assembly for 7 days and ensure maximum participation.

According to the circular, the initiative is to train students and teachers for the mass Surya Namaskar session to be held countrywide on January 26 to mark Republic Day celebrations and the 75th year of Independence. The Centre has planned a mega event in which 7.5 lakh people will take part in a musical performance of Surya Namasakar, an exercise that involves 12 yoga postures.

“It is a matter of national pride that students and teachers are going to participate in the session, and we have asked them to be prepared for it. The sessions will begin on January 1,” minister for primary and secondary education BC Nagesh was quoted in the media.

The minister justified the move saying the sessions are introduced to improve the physical fitness of students.

Meanwhile, the move has upset and worries teachers and parents especially with the Omicron numbers mounting. Some experts accused the BJP of pursuing the Hindutva agenda and saffronising the education system.

Akhilesh tears into Yogi govt on saffronisation of Haj house