‘India, US will be leaders in ending pandemic’ 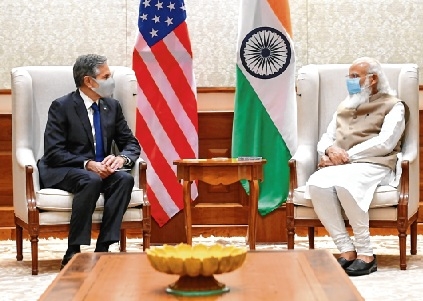 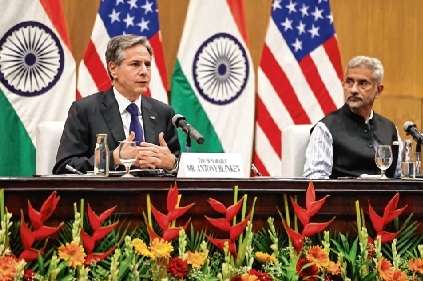 US Secretary of State Antony Blinken in New Delhi on Wednesday announced an additional $25 million to support vaccination efforts across India. The US Agency for International Development (USAID) will partner with India’s Health Ministry and state governments to support the vaccination programme through the Rs185 crore fund. Blinken said this funding will contribute to saving lives by strengthening vaccine supply chain logistics, addressing misinformation and vaccine hesitancy and helping to train more healthcare workers.

In his press statement, Blinken described the India-US friendship as one of the most consequential in the world. He said, “Covid has hit both of our countries very very hard. We are determined to end this pandemic and India and the United States will work together to do it, including through the Quad vaccine partnership which will bring safe and effective vaccines to others across the region. I believe as we move forward, India and United States together around the world will be leaders in bringing this pandemic to an end.’’

Acknowledging the aid and assistance provided by India to the US in the early days of the Covid-19, Secretary Blinken said he is proud the US has been able to return the gesture of friendship. Over the past few months, the US government has contributed more than $200 million to India for Covid-19 relief. “There has been a huge outpouring from individual Americans from the private sector in support as well.’’

Secretary Blinken who came to India 40 years ago with his family, said, “Together, the actions that India and United States take are shaping the 21st century and beyond. That is why strengthening the partnership with India is one of the United States top foreign policy priorities.”

He said he discussed with Jaishankar trade and bilateral investment, commercial ties and ways to strengthening regional cooperation.

Blinken said India and the US share a vision of a free, open, secure and prosperous Indo Pacific and will work together to make that vision a reality. He also discussed regional security issues. including Afghanistan. “As a leader and critical partner in the region, India has made and will continue to make vital contributions to Afghani­stan’s stability and development and will continue to work together to sustain the gains of the Afghan people and support regional stability after the withdrawal of the coalition forces.’’

This is the fourth meeting this year between Blinken and Jaishankar. Replying to a question during the media interaction, Jaishankar said, “Peace negotiations are the only way to create a lasting solution and the diversity of Afghanistan must be taken into account in finding that lasting solution.’’

Endorsing Jaishankar’s reply, Blinken said both India and the US are committed to the proposition that there is no military solution to the conflict. “Even as we withdraw our forces from Afghanistan and NATO and others withdraw their forces, we remain very much engaged in Afghanistan and in the diplomacy of working to bring the parties together at the table for a peaceful resolution of the conflict.’’

Asked how concerned he is about US pulling out forces from Afghanistan, Jaishankar replied, “ It is natural, I would say inevitable if the United States which for the last 20 years had a robust military presence in Afgh­anistan withdraws that presence, there will be consequences. The issue is not whether that is good or bad.’’

Blinken said atrocities by the Taliban in Afghanistan are deeply troubling. “Taking over the country by force and abusing the rights of its people is not the path to achieve those objectives. Th­e­re is only one path and that is at the negotiating table.’’

About China’s criticism on the Indo-Pacific and the Quad, Blinken said the Quad is not a military alliance, “What the Quad is actually quite simple but as important as it is simple. Four like minded countries — India, United States, Japan, Australia — coming together to work collectively to work on some of the most important issues of our times that are going to have a real impact on the lives of our people. We are pooling our resources and thinking like working on Covid-19, vaccine initiative, post pandemic economic recovery, climate crisis as well as a whole series of issues.”

Jaishankar emphasised it is not strange for groups of countries to work together. “People need to get over the idea that somehow other countries doing things are directed against them.”

Addressing civil society members in his first public event after arriving in Delhi and ahead of his meetings with the Indian leadership, Blinken said both India and the US share a commitment to democratic values and it is part of the bedrock of the bilateral relationship.

He said successful democracies include “thriving” civil societies, noting they are needed to make democracies “more open, more inclusive, more resilient, more equitable.” According to a participant, farmers’ protests, freedom of press, the Citizenship Amendment Act, minority rights and concerns over China’s assertiveness as well as situation in Afganistan were among issues that figured during the roundtable “Advancing Equitable, Inclusive, and Sustainable Growth and Development”.