In response to the humanitarian needs of the Afghan people, India has dispatched several shipments of humanitarian assistance consisting of 30,000 MTs of wheat, 13 tons of medicines, 500,000 doses of COVID-19 Vaccine and winter clothing

On Friday, the Government of India stepped up efforts to help to Afghanistan after more than 1,000 people were killed in the country due to a deadly quake.

"In order to closely monitor and coordinate the efforts of various stakeholders for the effective delivery of humanitarian assistance and in continuation of our engagement with the Afghan people, an Indian technical team has reached Kabul today and has been deployed in our embassy there," read a statement by the foreign ministry on Thursday.

At the United Nations Security Council (UNSC) briefing on Afghanistan, India expressed its deepest condolences to the victims and their families who were impacted by the devastating earthquake in Afghanistan and vowed to provide assistance and support in this hour of need.

In response to the humanitarian needs of the Afghan people, India has dispatched several shipments of humanitarian assistance consisting of 30,000 MTs of wheat, 13 tons of medicines, 500,000 doses of COVID-19 Vaccine and winter clothing.

Permanent Representative to UN, Ambassador TS Tirumurti, while addressing the Council said, "At the outset, I express deepest condolences to the victims and their families, and to all those impacted by the devastating earthquake in Afghanistan. India shares the grief of the people of Afghanistan and is ready to provide assistance and support in this hour of need."

Mr Tirumurti noted that as a contiguous neighbour and long-standing partner of Afghanistan, India has direct stakes in ensuring the return of peace and stability to the country.

"Given our strong historical and civilizational linkages to the Afghan people, we are deeply concerned about the recent developments in Afghanistan, especially the deteriorating humanitarian situation," he added.

Survivors struggle in the aftermath of disaster

Survivors of Afghanistan's deadliest earthquake in two decades say they have nothing to eat, no shelter, and fear a possible cholera outbreak.

In villages across Gayan district, toured by Associated Press journalists for hours Thursday, families who had spent the previous rainy night out in the open lifted pieces of timber of collapsed roofs and pulled away stones by hand, looking for missing loved ones. Taliban fighters circulated in vehicles in the area, but only a few were seen helping dig through rubble.

There was little sign of heavy equipment — only one bulldozer was spotted being transported. Ambulances circulated, but little other help to the living was evident.

Many international aid agencies withdrew from Afghanistan when the Taliban seized power nearly 10 months ago. Those that remain are scrambling to get medical supplies, food and tents to the remote quake-struck area, using shoddy mountain roads made worse by damage and rains.

Afghan and international aid agencies are assessing the damage and delivering supplies, but this is a major and developing crisis, one which comes on top of the country's already dire humanitarian situation.

The United Nations, which is also helping support victims, is warning of the risk of a possible cholera outbreak.'

The quake took the lives of 1,000 people, according to the state-run Bakhtar News Agency, which also reported an estimated 1,500 more were injured. In the first independent count, the United Nations Office for the Coordination of Humanitarian Affairs said around 770 people had been killed in Paktika and neighboring Khost province.

Hundreds of homes have been destroyed, and thousands of locals have been affected after a strong earthquake hit the eastern Paktika province earlier this week. In heart-wrenching scenes, news agency AP reported.

Locals were seen digging graves with hands. A majority of them have been left on their own.

Read Also
Afghanistan earthquake: US says 'unaware' of any aid request from Taliban 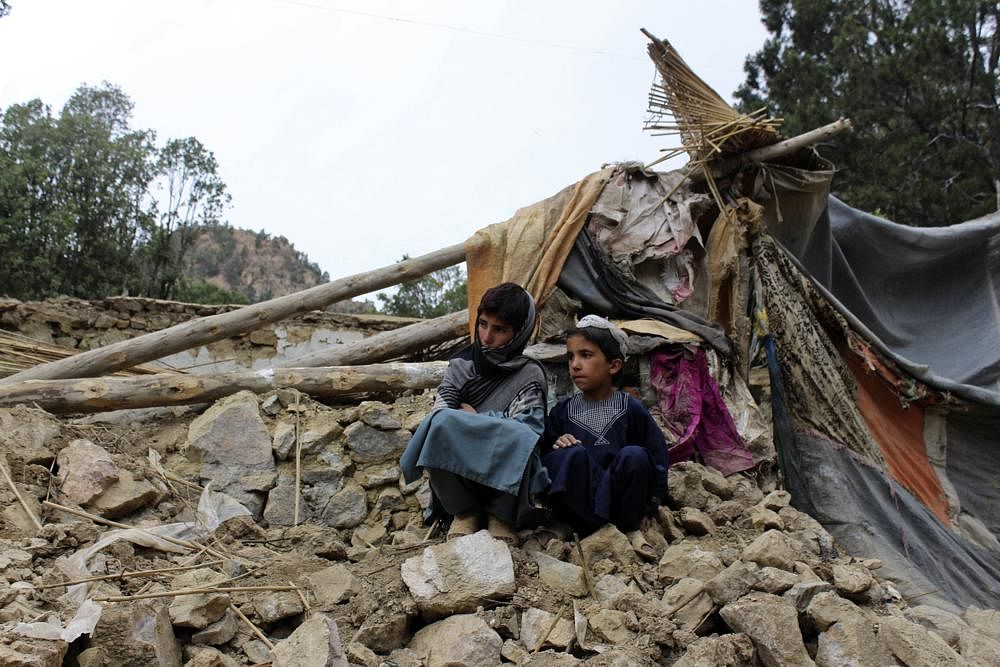