Hyderpora encounter: Families of civilians killed in encounter removed by police from protest site in Srinagar 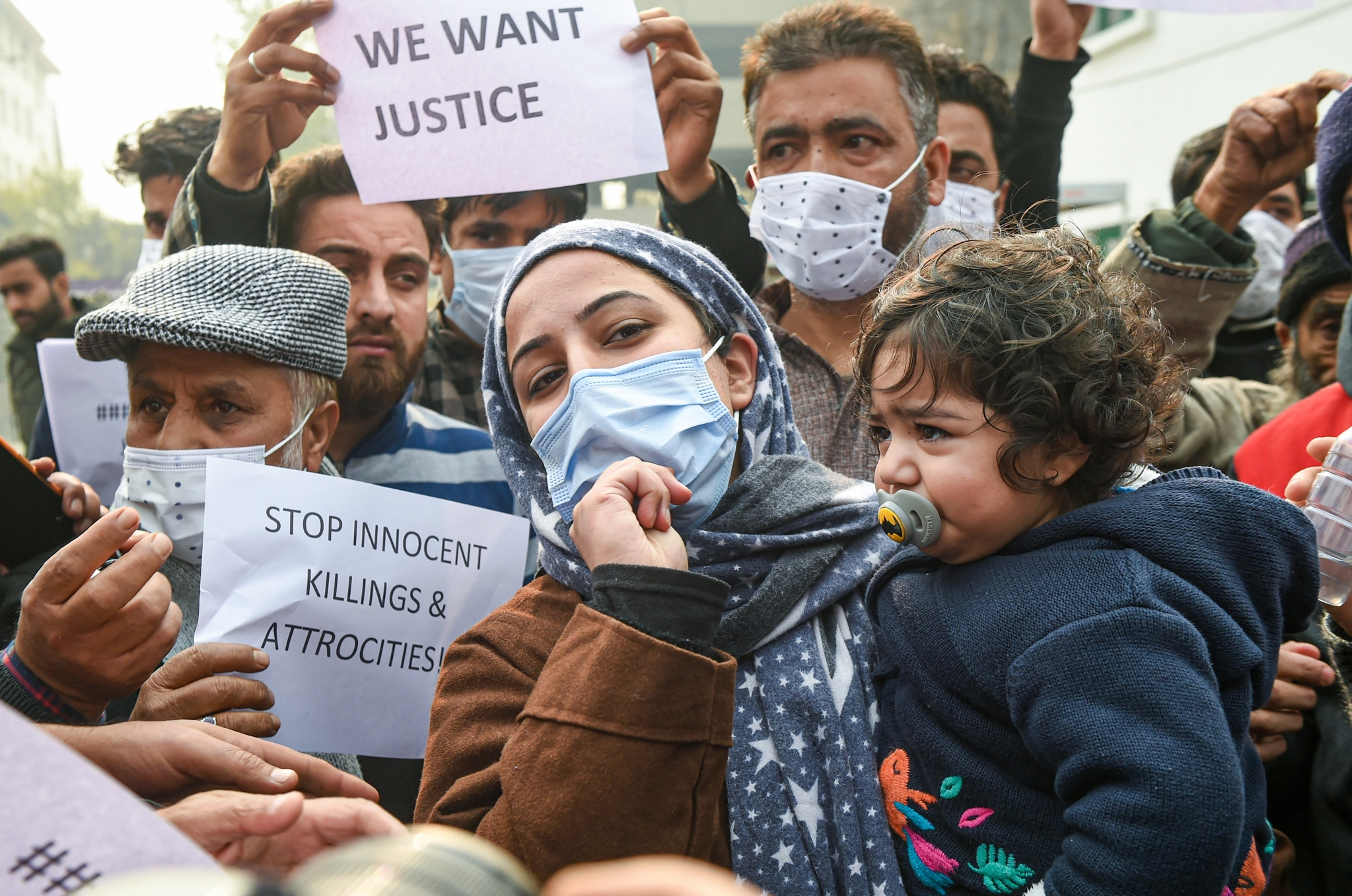 The family members of two civilians killed in an encounter in Srinagar's Hyderpora, who were staging a protest were forcibly removed by police around midnight, reported NDTV.

Amid biting cold, the families of two civilians killed in the Hyderpora encounter in Srinagar held a candlelight vigil after a day-long protest on Wednesday, demanding justice for the victims and the return of their bodies.

A controversy had erupted over Monday's encounter in Hyderpora following conflicting claims about the two deceased civilians as their family members contested the police's charge that they were "terror associates".

According to the police, a Pakistani terrorist and his local associate Mohammad Amir, along with two civilians -- Altaf Bhat and Mudassir Gul -- were killed in the encounter, where an illegal call centre and a terror hideout were allegedly being run.

On Wednesday, the families of Bhat and Gul held a protest at Press Enclave in the city, demanding that their bodies be returned to them as they were not linked to militancy.

However, police forcibly removed the protestors from the site at around midnight.

Mainstream politicians from Jammu and Kashmir have condemned the police action, video clips of which have gone viral on the social media.

"Instead of handing over mortal remains of the innocent civilians, police has arrested the family members for demanding the bodies of their loved ones. Unbelievably ruthless & insensitive. Least they can do is return the mortal remains immediately," People's Democratic Party (PDP) president and former Jammu and Kashmir chief minister Mehbooba Mufti wrote on Twitter.

National Conference (NC) vice president Omar Abdullah called the action outrageous, saying this is how the Jammu and Kashmir police is fulfilling Prime Minister Narendra Modi's promise to remove "dil ki doori" and "Dilli se doori" made during an all-party meeting in June.

"This is the naya Kashmir of 2021. This is how the J&K police fulfils @PMOIndia promise to remove 'dil ki doori & Dilli se doori'. It's outrageous that the J&K administration did not allow the families to conduct a peaceful sit in protest," the former Jammu and Kashmir chief minister said in a tweet.

He said he has rarely seen families who have been "wronged" conduct themselves with such dignity.

"They have been reasonable in their demands & dignified in their conduct. The result of this is visible for all to see as the police drags them away in the dead of night," Abdullah said.

He said Lieutenant Governor Manoj Sinha should reach out to the families, hear them in person and hand over the bodies of their loved ones to them. "It's the only right thing to do, it's the only humane thing to do," he added.

"What on earth Has happened to the administration. Y can't they present a human face. Y r they so intent on presenting a v inhuman and ugly face (sic)," he said in a tweet.

"General Dyer must be very proud of you @JmuKmrPolice," NC leader Ruhullah Mehdi wrote on Twitter.