How misconceptions are stopping chemists from storing medical abortion drugs

Around 65 per cent of all chemists, who participated in a survey, stated that the availability of Medical Abortion drugs (MA) has increased the number of abortions in India. This is a perception that these chemists have, stated a report by FRHS India, which was in collaboration with Pratigya Campaign for Gender Equality and Safe Abortion.

The outcome of the study was based on a sample of 1,500 chemist outlets located in the markets of five cities in each of the states of Assam, Delhi, Haryana, Punjab, Madhya Pradesh and Tamil Nadu. The study was conducted between January and March 2020.

In the case of availability of MA drug in Assam, Delhi, Haryana, Punjab, Madhya Pradesh and Tamil Nadu, it was found that it was 69.6 per cent, 34 per cent, 2 per cent, 1 per cent, 6.5 per cent and 2 per cent respectively. This study was conducted even before COVID-19 and its subsequent impact. VS Chandrashekar, Chief Executive Officer, Foundation for Reproductive Health Services India (FRHS) said. “If the supply of MA drugs in normal situations is this, this equation will not be that good during COVID-19 times.”

Across the six states, chemists who were not stocking MA drugs were asked about the reasons for not stocking and multiple responses were accepted. About 53 per cent reported legal/regulatory issues as a common reason. Meanwhile, others stated low demand; too much paperwork/documentation requirements; drug inspectors trouble chemists who stock and sell MA drugs; the drugs are harmful to women among other reasons. Overall, it can be concluded that 79 per cent chemists no longer stock MA drugs to avoid legal issues and documentation work.

Speaking to The Free Press Journal, Chandrashekar, said, “While there are some legal perceptions, there are also some misunderstandings around the MA drugs. This discourages stockists from stocking the drugs.” He added that there is this misconception that combi-pack of MA drugs can lead to sex-selective abortion. This is completely false, he asserted. As per the survey, it was found that 9.8 per cent of the respondents perceived that MA can be used for gender-biased sex-selection, while in the state of Tamil Nadu, this perception is higher. “Significantly, 35.5 per cent of respondents in Tamil Nadu reported that MA drugs can be used for gender-biased sex-selection.” This is a misconception since MA drugs are only approved for use up to nine weeks gestation, when sex determination, using Ultra Sonography, is not possible. 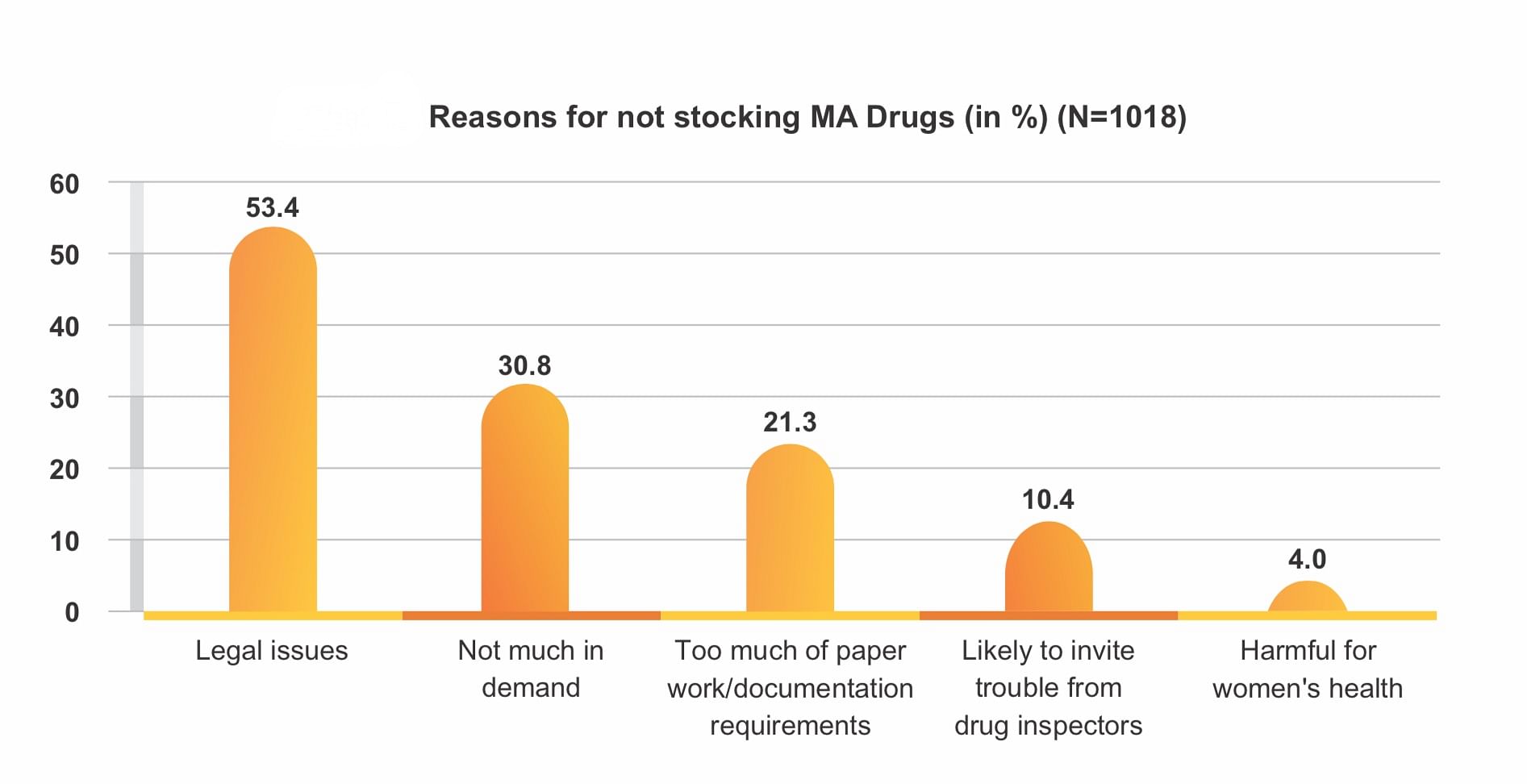 Yet another perception common among masses is that this drug is available without prescription. But it is not true, Chandrashekar said, about 77 per cent come to the chemist with a prescription as people are aware that prescription is needed. “65 per cent of all chemists interviewed reported that the availability of MA has increased the number of abortions in India.” In addition, around 51 per cent chemists stated MA drugs are not useful to women, which again a perception. “Surgical abortion and MA drugs are equally good depending on the gestation period.”

In the past, FRHS India and Pratigya Campaign for Gender Equality and Safe Abortion had conducted a similar study in five cities in each of the states of Bihar, Maharashtra, Rajasthan and Uttar Pradesh. In the top six states that have the lowest level of MA drugs stocked, Maharashtra is in the top, followed by Rajasthan, Punjab, Haryana, Tamil Nadu and Madhya Pradesh.