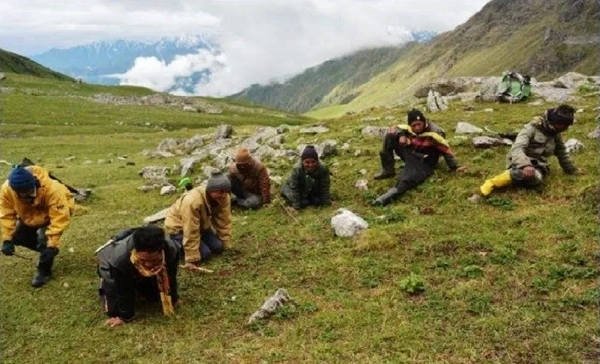 Noida; The mad rush to harvest expensive caterpillar fungus in the higher Himalayan region of Uttarakhand is taking a toll on the fragile ecosystem of the alpine meadows.

Researchers studying the harvest and trade aspects of the Cordyceps fungus (Ophiocordyceps sinensis) say the high market price of the species in China coupled with limited manpower of the state's forest department have resulted in the uncontrolled collection of the species.

They say it is causing soil cover destruction, felling of alpine trees for fuelwood and hunting of endangered animals for food by the harvesters.

Cordyceps is considered a potent aphrodisiac and energy booster and deemed to cure lung, liver and kidney problems in the traditional Tibetan and Chinese medicines.

Every year between May and July, thousands of villagers in the state embark on an arduous journey to the higher reaches with their domesticated animals, tents and sacks of supplies and stay for two months to harvest it.

A scientist with the Wildlife Institute of India, Amit Kumar, who has carried out research on the fungus species at Nanda Devi National Park near Joshimath, informed that the harvesters sometimes kill wild animals, including endangered ones such as blue sheep and musk deer, for food during their stay in the meadows.

He said that during the course of his research when he interacted and worked with the locals who went to harvest the fungus, he found out that it's difficult for the harvesters to survive on potatoes and wheat and thus they hunt wild animals for meat.