Rijiju shared a video on Twitter, wherein he can be seen avoiding boxing with Mary in the ring despite the Olympic silver medalist enthused to take him on.
ANI 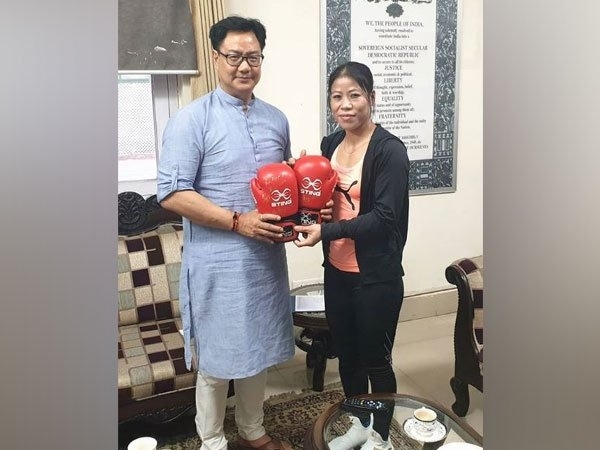 New Delhi: In an attempt to escape fighting with six-time world champion Mary Kom, Sports Minister Kiren Rijiju said he had to use the excuse of not fighting with women to avoid a boxing match.

Rijiju shared a video on Twitter, wherein he can be seen avoiding boxing with Mary in the ring despite the Olympic silver medalist enthused to take him on.

"Six times World Boxing Champion and India's pride, Mary Kom kept saying; Come on, come on, let's fight! I was so scared that I had to take an excuse. So I said, "I don't fight with women"," Rijiju tweeted.

Rijiju recently visited the Indira Gandhi Stadium sports training centre in the capital and interacted with the players and coaches of Boxing, Cycling and Gymnastics.

He assured to provide all support to make the players capable to compete at an international level and spread sports to every corner of the country through the Prime Minister's Khelo India program.

Ever since the 51 kg category boxer became an Olympic weight, Mary has been juggling between 51 kg and her favourite 48 kg. The Indian boxing icon, who has her world titles in 48 kg, also won 2012 Olympic bronze and 2019 India Open gold, both in 51 kg category.

The London Olympic bronze medallist is preparing for the 2020 qualifications.