Final Destination: Watch CCTV footage of car travelling at 100km/h which falls off flyover on a pedestrian 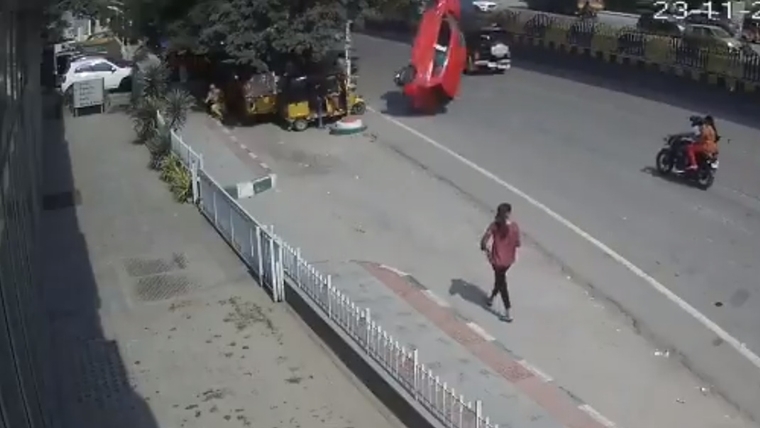 Hyderabad: A woman was killed and four others were injured when a car rammed a divider and fell off a flyover here on Saturday, police said.

The car, occupied only by the driver, was moving at 104 kmph on the flyover at Biodiversity Junction and it went out of control and crashed into the divider, they said.

The woman, who was standing on the road along with some others under the flyover, was killed and three other people suffered injuries.

#WATCH A car after losing control falls from flyover located at Biodiversity Junction, Raidurgam in Hyderabad; one pedestrian has lost her life in the incident, car driver and 2 others receive injuries; Case registered pic.twitter.com/Tjl8yPaC8g

The car driver sustained injuries and was being treated in the intensive care unit of a hospital.

A case relating to charges of causing death by negligence has been registered against the driver.

On preliminary investigation, it was found that the accident occurred due to the car travelling at 104 kmph instead of the prescribed 40 kmph on the flyover, Cyberabad traffic police said.

Greater Hyderabad Municipal Corporation Mayor B Rammohan announced an ex-gratia of Rs 5 lakh to the family of the deceased, a GHMC release said.

A signage has been installed at a vantage point directing that vehicles should travel at only 40 kmph speed after two persons recently died in an accident on the same flyover while taking selfies, it said.

Another video taken from the bridge shows the chilling moment when the car flips and then plummets to the ground.

Distressed to hear about todays accident on Biodiversity flyover.Prima facie it appears to be a result of over speeding; have directed FHMC Engineer-in-Chief & @cpcybd to close the flyover & get speed control/safety measures in place & an independent expert committee evaluation, he tweeted.

The flyover would be closed for three days to put in place measures to control high-speed driving, according to the GHMC release.