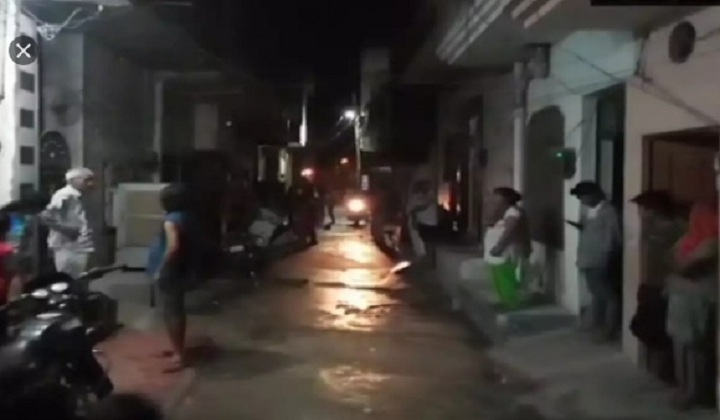 People come of their houses after tremors were felt in Rohtak on Friday. | -- ANI

New Delhi: An earthquake measuring 4.6 on the Richter scale, in Haryana’s Rohtak, jolted the national capital and its surrounding regions on Friday evening. According to the National Centre for Seismology, the earthquake, with a depth of 3.3 km, had its epicentre 16 km east-southeast of Rohtak. It occurred at 9.08 pm. European-Mediterranean Seismological Centre stated the quake originated 49 km northwest of Delhi. The tremors prompted people to venture out of hom­es in fear. No casualties or damage to properties have been rep­o­rted so far. Qua­kes of less than five magnitude are unlikely to cause much dama­ge, unless in ca­se of weak or compromised structures. Low-intensity quakes have been hitting Delhi since April. This is the 7th quake, which shook NCR over the last month.

Jhansi/ New Delhi: A 45-year-old migrant labourer was found dead in a toilet of a 'Shramik Special' train when it was being cleaned by workers at UP’s Jhansi station, four days after he boarded it for Gorakhpur, officials said on Friday. The body was found when the train was opened for maintenance and sanitisation on May 27 and he had boarded it on May 23, they said. The Jhansi-Gorakhpur train left on May 23 and reached Gorakhpur on May 24, then, as per protocol, its rake was sent back to Jhansi for maintenance and sanitisation on May 27, the officials said.

Srinagar: Brother of active Hizbul Mujahideen member Hidayatullah Malik, the owner of the explosives-laden car intercepted in Pulwama, is being questioned by the police, J&K Police said on Friday. In a major breakthrough, police had identified the owner of the explosives-laden car. According to the police, Hidayatullah Malik is a resident of Sharatpora in Shopian who joined the militant ranks in July 2019. “As per the investigations we have found the car belongs to Hidayatullah Malik. He is an active Hizbul Mujahideen militant who is a resident of Sharatpora Shopian. He had joined militant ranks in July last year and is being wanted by the forces,” said a senior police officer.