His visit received wide attention in the Israeli media, which warmly welcomed him and carried long biographical articles
PTI 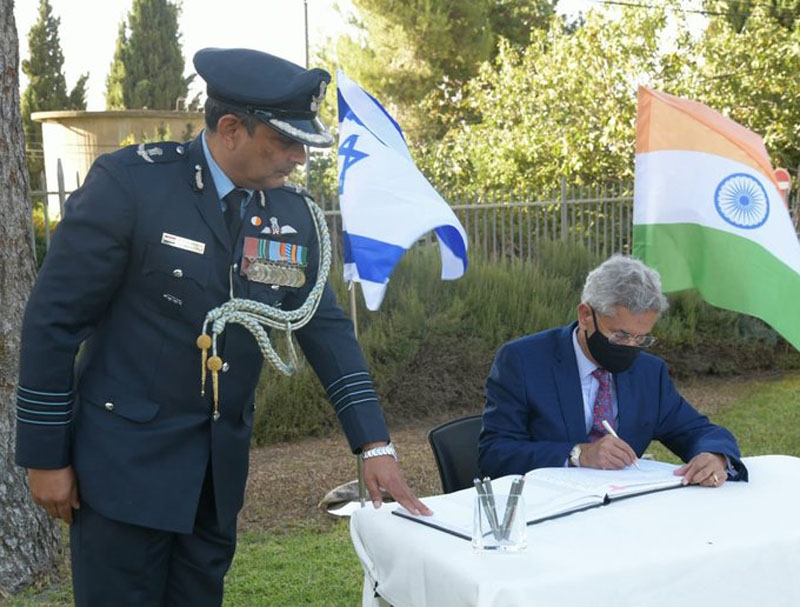 External Affairs Minister S Jaishankar on Monday unveiled the Bhoodan Grove plaque at the Jerusalem Forest, bringing out lesser-known aspects of Indo-Israel relations before the establishment of full-fledged diplomatic ties between the two countries.

With an objective of keeping Mahatma Gandhi's concept of the village as the basic unit of development, Indian leaders who were exploring ways to implement the socialist ideals of the Sarvodaya movement namely, Bhoodan and Gramdan', made several visits to Israel to study the social structure of different forms of Israel's communal and cooperative institutions -- Kibbutzim and Moshavim'.

Jayaprakash Narayan, the leader of the Sarvodaya movement, visited Israel in September 1958 on a nine-day visit as the guest of Histadrut, the Israel Federation of Labour.

His visit received wide attention in the Israeli media, which warmly welcomed him and carried long biographical articles. He met then Israeli prime minister David Ben Gurion and visited Kfar Saba in central Israel, and Kibbutz Afikim near the Sea of Galilee of northern Israel during his stay.

Narayan's visit was followed by that of a 27-member Sarvodaya team, which during its six-month study tour in Israel from February-August 1960 spent time in Tel Aviv and Kfar Giladi in northern Israel.

On their way back to India, they planted the Bhoodan Grove in Jerusalem Forest on May 22, 1960. Jaishankar described the visit by Narayan and Bhoodan workers as an aspect of our shared history which hasn't received the attention it deserved.

He also called the unveiling of the plaque very timely as last year was the 125th birth anniversary of Acharya Vinoba Bhave. But there is also a larger message in what we are doing today.

It is partly a message that our relationship is very human centric that of the importance of going green and most of all I think it is a reminder to all of us that between India and Israel we need to keep finding new ways, better ways, more deeper societal connect and that is at the heart of the progress of our ties, the minister said.

Jaishankar was given a certificate by the Jewish National Fund after unveiling the plaque at Bhoodan Grove. In his address on Sunday evening, he also shared information about this shared historical connection with the Indian Jewish community.

In modern post-Independence times, there are also the relatively less known aspects of how major socialist political leaders and streams in India felt a kinship with the kibbutz movement in Israel. And, in a quest to build on the Gandhian concept of ashram or village as a self-sustaining unit of development.

The details of the intense cooperation between Sarva Seva Sangh, the group charged with carrying on Gandhi's constructive programme of social uplift, and Israeli Moshavim and Kibbutzim was last year also published in an article, The Kibbutz and the Ashram: Sarvodaya Agriculture, Israeli Aid, and the Global Imaginaries of Indian Development, by Benjamin Siegel in the American Historical review.

The Sarva Seva Sangh hosted Benjamin Halevy, a Ukraine-born agriculturalist recruited from the Kfar Yehoshua Moshav (or cooperative agricultural settlement) in Israel's Jezreel Valley, for two years after reports emerged of the prodigious yields that Halevy was coaxing from basalt soil.

The kibbutz at Gandhi's ashram would not be merely an Israeli model adapted to Indian contexts. For members of the Sarvodaya movement, India's hugely popular program dedicated to Gandhian practice after his death, the settlement would serve as a living rebuke to votaries of coercive socialist agriculture and modernization theory alike, the author writes in the article.

An Israeli-designed collective agricultural settlement in the spiritual home of the late Mahatma would show that a popular programme of cooperative uplift was not unsuited to the economic and social realities of post-colonial India, proof that Gandhian economics was on a par with the age's most daring political experiments, he adds.

The External Affairs Minister also laid a wreath at Holocaust Museum Yad Vashem to pay respects to six million Jews who perished in the Holocaust.

This memorial is both a testimony to the evil that man is capable of as also the resilience and fortitude of the human spirit. For those who came after it will remain an inspiration of courage and righteousness, Jaishankar wrote in the visitors' book at the Holocaust Museum after laying a wreath.

Later in the day, Jaishankar will be meeting his Israeli counterpart Yair Lapid during the day besides visiting the Indian hospice in Jerusalem's old city.