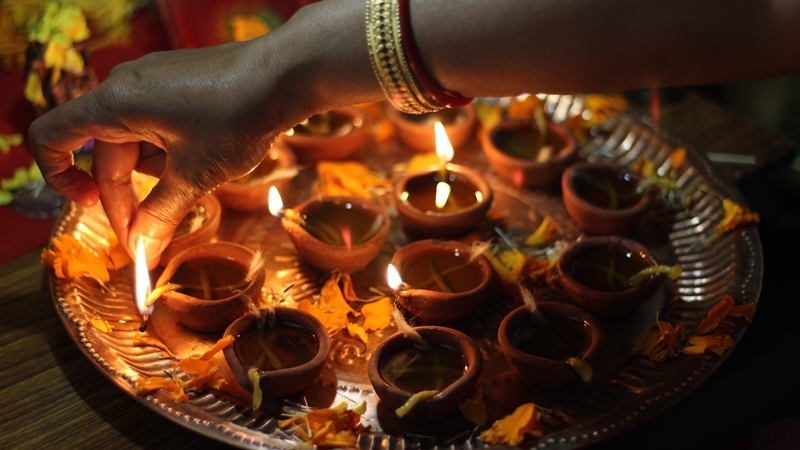 It is the time of the year again when our entire nation is immersed in happiness, love, gratitude, and fun. The time when there is a sparkle in everyone’s eyes and our neighbourhood buzzes with excitement. The warmth in the air only adds up to the festive spirit. The festival of lights is spread across five-days and each day has its own significance and traditional rituals that are followed. The five-day festival begins from Dhanteras and ends on Bhai Dooj. The festival is associated with wealth and happiness and has different significance on each day.

Here’s a brief account on the significance of Diwali:

Day One: Dhanteras
Dhanteras, also known as Dhanatrayodashi or Dhanvantari Trayodashi, is the first day of Diwali. The word ‘dhan’ means wealth and Hindus consider it auspicious to buy gold or silver or at least new utensils. This day marks the beginning of Diwali celebrations. It falls two days before Diwali i.e. on the thirteenth day of the dark fortnight in the month of Kartik. Kubera, the god of wealth, is worshipped on the day.  It is believed that it is on Dhanteras when Goddess Lakshmi came out of the ocean of milk during the churning of the sea. Hence, in the evening, Lakshmi Puja is performed by lighting tiny diyas to drive away evil spirits.

Naraka Chaturdashi falls on the second day of Diwali and is celebrated to mark the victory of Lord Krishna against Narkasur. The day is also known as Choti Diwali, Kali Chaudas or Roop Chaudas. According to Hindu mythology, Narkasur, son of earth, who rules several kingdoms, becomes an evil asur. He later tries to rule heaven and earth. Later, Krishna attacks Narkasur and beheads him with his Sudarshan Chakra. Hence, there is a ritual to break karit (a bitter fruit) on the day, symbolising the victory of good over the evil.

Third Day: Lakshmi Puja
The third day of Diwali is dedicated to Goddess Lakshmi and is known as Lakshmi Puja. The puja is a combination of five deities –Mahalakshmi, Lord Ganesha, Mahakali, Mahasaraswati and Lord Kuber. On this day people pray for wealth, prosperity and happiness of their dear ones. Though the day falls on Amavasya, which is usually considered the inauspicious day, on Lakshmi Puja, it is regarded as the auspicious day. It is believed that on Lakshmi Puja, Goddess Lakshmi visits her devotes and bless the family with health, wealth and happiness.

Fourth Day: Padwa, Balipratipada
The fourth day of Diwali is called as Padwa which celebrates the bond between the wife and husband. On Padwa, wife prays for the long life, wealth and prosperity of husband and husband showers wife with gifts.

The day is also celebrated as Bali Pratipada, the day when Lord Vishnu’s avatar Vaamana took over all the three worlds from demon King Bali. The king was later sent to the underworld. As the king had a great affection for his people, he gains the permission to visit the kingdom once a year. And since then people celebrate the day as the homecoming of Bali as Balipratipada.

The five-days of Diwali conclude with Bhai Dooj, a day dedicated to the bond of brothers and sisters. Bhai Dooj is also called as Bhaubeej, Bhai Tika and Bhai Phonta. According to mythology, Yam, the death of god, visits his sister Yamuna on this day and puts tilak on his forehead. Later, Yam announces that on this day any brother who has red tilak applied by his sister experiences good health and fortune. Hence the day is called ‘Bhai Dooj’. Since then, on this day brothers visit sisters and a tilak ceremony followed by an exchange of gifts is performed.