Delhi not property of individual or party, people will decide on statehood: Arvind Kejriwal 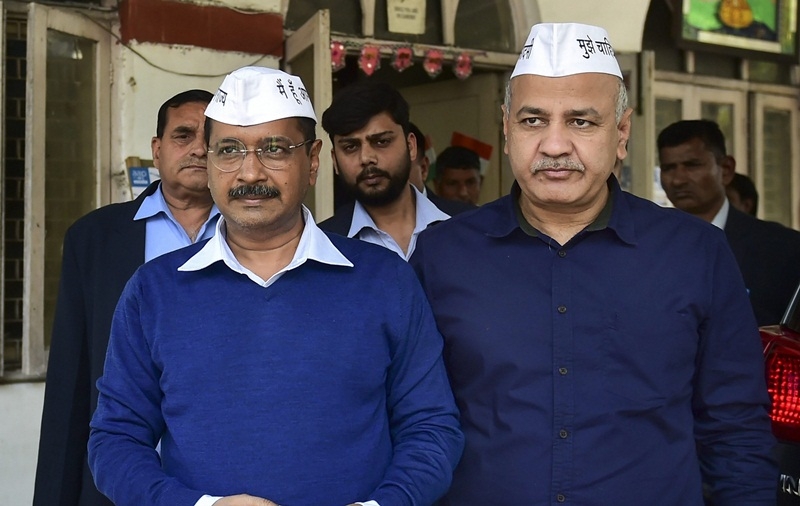 New Delhi: Aam Aadmi Party chief Arvind Kejriwal on Wednesday said the national capital is not the property of any individual or party and the people of Delhi would decide on granting it full statehood, as he raised the pitch for one of his party’s key demands ahead of the Lok Sabha polls.

Kejriwal and his party members burnt copies of the 2014 manifesto of BJP, outside its ITO office, in which it had promised full statehood. Meanwhile, BJP workers led by Union minister Vijay Goel also burnt copies of AAP’s manifesto and a symbolic tower of its “failed” promises while accusing it of “cheating” the people of Delhi. Addressing media, Kejriwal claimed that people of Delhi have been exploited and cheated for the past 70 years.

City BJP president Manoj Tiwari said the national capital cannot be given full statehood as its chief minister protested in front of the Rail Bhawan, Kejriwal noted. “Tiwari says Delhi cannot be granted statehood as I had sat on a dharna. Tumhare baap ki Dilli hai (Is Delhi your family property?) Who are you?” Kejriwal said referring to Tiwari.

Also Read: AAP winning all 7 seats in Delhi on its own: Arvind Kejriwal

He said Delhi is not the property of any individual or party to decide whether it would be given full statehood or not. “It is the people of Delhi who would decide if it would be granted full statehood or not.” BJP MLA Vijendra Gupta, the Leader of Opoosition in Delhi, said the language used by Kejriwal depicts the kind of family he belongs to. Kejriwal responded by saying that he should not target his family and say whatever he has to say to him.

“The people in Delhi are ready for making sacrifices, without sacrifice and struggle Delhi could not be made a full state. Prime Minister Narendra Modi had promised the people in Delhi that they would be given full statehood if they (the AAP) get all seven seats,” he claimed. Asserting that the upcoming polls will be fought on the issue of full statehood, Kejriwal criticised Modi for not fulfilling this promise as mentioned in BJP’s 2014 manifesto. “It amounts to cheating. They (the BJP) should come clean.” The ongoing general elections are also a part of the mass movement for full statehood for Delhi, he said, adding his party plans to go full throttle over the issue in coming days.

The CM said once Delhi attains full statehood, the AAP will ensure that women roam freely even at night. The party will also give 85 per cent reservations to local people in jobs and colleges, he said. Kejriwal also referred to the sealing of shops earlier this year and said the party would have halted the process within five minutes. “We would have (also) regularised contractual employees,” he said. The two parties also engaged in a tug of war on Twitter with Deputy Chief Minister Manish Sisodia questioning the saffron party on its failure to grant full statehood to Delhi.

Sisodia posted a series of tweets in Hindi arguing with Delhi BJP spokesperson Harish Khurana, who challenged him for a public debate on the issue. Sisodia asked Khurana, why Delhi was deprived of full statehood despite the BJP promising it in its election manifesto. “Harish Khurana ji what I understand was also comprehended by late Madan Lal Khurana Sahab (Harish’s father and ex-CM of Delhi), but its sad that you have still not understood the anti-Delhi politics of Modi ji. Do not betray Delhi…just tell if Delhi should have full statehood or not?(sic)” Sisodia tweeted.

Khurana replied by saying issues are resolved through discussion and added that many departments that did not come under the Delhi government earlier now function within it due to his father’s talks with the Centre. AAP convener Kejriwal also slammed Khurana for “speaking against his father who had sacrificed his life for full statehood to Delhi.” A furious Khurana challenged Kejriwal for an open debate if he had “courage” to face his questions.