Delhi LG allows release of Jessica Lal murder convict Manu Sharma: All you need to know about him 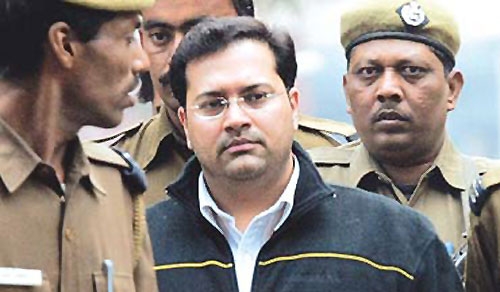 Delhi LG allows release of Jessica Lal murder convict Manu Sharma: All you need to know about him |

Manu Sharma, who was convicted and sentenced to life imprisonment in the 1999 Jessica Lal murder case, has received the approval of the Lieutenant Governor of Delhi for his release after a recommendation of the Sentence Review Board for the same.

Advocate Amit Sahni, while speaking to ANI on Tuesday, confirmed the development and said that Delhi Lieutenant Governor Anil Baijal has approved the name of Siddharth Vashishth also known as Manu Sharma for release from Tihar Jail.

He said that Sharma's name was approved in a sentence review board meeting held on May 11. Earlier, Delhi High Court had also asked the SRB to consider his name for release.

Vashishth, 45-years-old, is serving life term in connection with a case registered under Section 302 (murder), 201 (causing disappearance of evidence of the offence, or giving false information to screen offender) and 120B (criminal conspiracy) of the Indian Penal Code (IPC).

According to his petition for release, the convict has undergone imprisonment for 16 years, 11 months and 24 days in actual, and 23 years 4 months and 22 days with remission. He has availed parole 12 times and furlough 24 times.

Sahni said that the Special Commissioner of Delhi Police (Crime) has not opposed the premature release of the convict in the meeting.

The Social Welfare Department, Delhi has recommended the premature release of the convict.

Manu's wife -- Preity Sharma -- through her lawyer had earlier approached the National Human Rights Commission (NHRC) alleging gross violation of human rights claiming that her husband has been illegally detained for more than the prescribed period of incarceration (20 years with remission) as per the prevalent policy of the state.

Who is Manu Sharma?

Siddharth Vashisht, also known as Manu Sharma, is a convicted murderer who was serving life imprisonment for the murder of Jessica Lal in 1999.

He is the son of former Congress leader and Union Minister Venod Sharma and the brother of media baron Kartikeya Sharma. Sharma was born in 1977 to Venod Sharma and Shakti Rani Sharma. Sharma studied in Mayo college in Ajmer and completed two years of an undergraduate course in Commerce. He first thought that he'd pursue MBA but instead joined his family business.

Apparently, he built the Piccadilly hotel chain that includes Blue Ice in Chandigarh and a theatre in 1990s.

He married his friend who he knew for ten year in a low-profile ceremony at his residence in Chandigarh. Their marriage was said to be delayed due to his conviction.

Well, Sharma was a regular party-goer in those days in Delhi. Jessica Lal, who was tending a bar at the Tamarind Court restaurant owned by socialite Bina Ramani at the Qutub Colonnade in South Delhi’s Mehrauli area on April 30, 1999, was gunned down by Sharma after she refused to serve him alcohol.

Anguished Sharma fired a .22 pistol at her and killed her. He was then arrested and charged with murder, destruction of evidence, and other offenses. When the case was opened in 2006, he was sentenced to life imprisonment by the high court in December for killing Lal in 1999. The trial court had acquitted him, but the Delhi High Court reversed the verdict and the Supreme Court upheld the life sentence in April 2010.