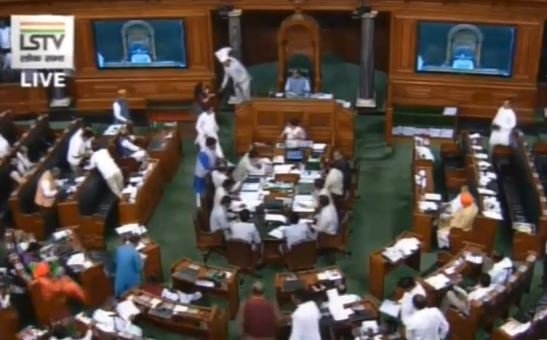 New Delhi: Lok Sabha on Tuesday witnessed an uproar over US President Donald Trump's remarks on Kashmir mediation, with Congress demanding a reply from Prime Minister Narendra Modi on the issue.

As soon as the Lower House met for the day, members from the Congress and some other Opposition parties were on their feet shouting slogans over the issue.

Trump had on Monday claimed that Prime Minister Modi had asked him to play the role of a mediator on Kashmir. Amid the ruckus in the House, Speaker Om Birla said it was a serious issue and there should not be any politics over the matter. He urged members to rise above party lines and think about national interest. No such request made by PM Modi: S Jaishankar on Donald Trump's claim

Parliamentary Affairs Minister Pralhad Joshi said Opposition members were trying to belittle the image of the country, which is "highly unfair and uncalled for". Later, the Speaker said the issue can be discussed during the Zero Hour and the Question Hour was taken up after normalcy returned.

Congress members were heard shouting 'we want an answer' and the party's leader in the House Adhir Ranjan Chowdhury said the prime minister should give an answer. Home Minister Amit Shah and Defence Minister Rajnath Singh were present in the House.