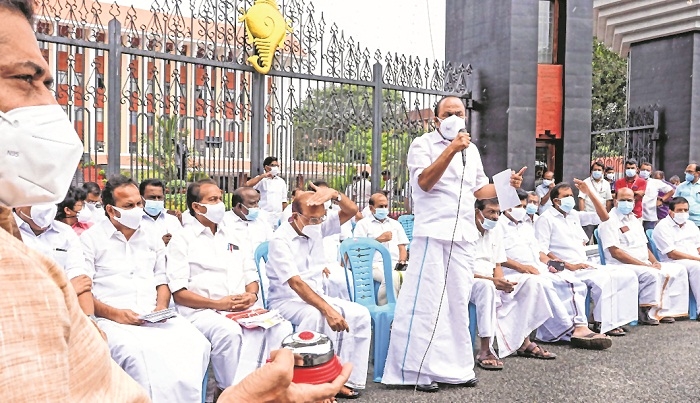 In a first of its kind, the Congress-led opposition after being denied permission to seek leave for an adjournment motion demanding the resignation of Kerala Chief Minister Pinarayi Vijayan over the fresh revelation in the gold smuggling case, held a mock session outside the main gate of the Assembly on Thursday.

The prime accused in the gold smuggling case, Swapna Suresh, has alleged that a packet of foreign currency was sent to Vijayan while he was on a visit to the UAE in 2017, through a diplomat of its Consul General's office.

Senior legislator PT Thomas sought leave for the motion, but Speaker MB Rajesh said since the matter is sub-judice, it cannot be given permission to move this.

Following this, an angry opposition decided to boycott the day's session and trooped out of the house and marched to the front gate of the Kerala Assembly.

In front of the assembly, chairs were placed and all the opposition legislators sat and Thomas pointed out that the details of the role of Vijayan has now come out in the show cause notice issued by the Customs to Swapna and other accused on the issue of illegal export of dollars abroad.

"The show cause notice, dated July 29 came out on Wednesday and Swapna Suresh says M Sivasankar (then secretary to Vijayan) called her and said there was a very important packet that had to be sent to the UAE to Chief Minister, who had reached the UAE on the previous day. Sarith collected the packet and gave to the diplomat Ahmed Al Doukhi, for carrying it to the UAE. Sarith informed her unofficially that he had brought the said packet to the Consulate for screening it in the X-Ray machine and that the packet contained currency," said Thomas.