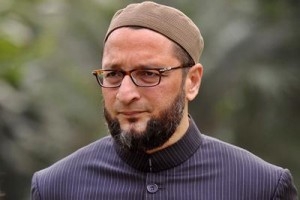 Hyderabad: AIMIM president Asaduddin Owaisi on Saturday said that the 'myth' of 40 lakh illegal migrants in Assam claimed by union home minister Amit Shah had been busted, with the updated final NRC excluding only 19 lakh.

"First of all, it is for the Home Minister to clarify. Because Mr Amit Shah had made a speech in which he said there are 40 lakh 'ghuspeti' (intruder, infiltrator) in Assam.

I want to know from him...does he still stand by his comment that there are 40 lakh ghuspeti?" he told reporters here. He claimed that late union Home Minister Indrajit Gupta had put the number in 1997 to be 40 lakh,while former Minister of State for Home Sriprakash Jaiswal had stated the number of illegal migrants to be 50 lakh.

"Now this myth of illegal migrants has been busted. That is why you see BJP is now complaining about National Register of Citizens," he said.

Owaisi said he had spoken to many people in Assam, who cited instances of childrens names not finding a place in the list, though the names of their parents were in it.

"If the foreigners tribunal acts in a judicious way, this number will further come down. However, 19 lakh is a huge number," Owaisi said.

He condemned the alleged comments of BJP leader Himanta Biswa Sarma in Assam that the party was not happy with the final NRC and would bring in a legislation on the matter.

Owaisi said the BJP should learn a lesson from the Assam experience and stop asking for NRC throughout the country "in terms of Hindus and Muslims".

What Amit Shah, the late Indrajit Gupta and Jaiswal said on the number illegal migrants had turned out to be wrong, he said.

The updated final NRC, which validates bonafide Indian citizens of Assam, was released in that state on Saturday, with the authority conducting the exercise shutting out the citizenship claims of over 19 lakh applicants.

Asked about the GDP data released on Friday, he alleged that BJP was not concerned about it, but only about how to 'polarize' people of different religions and to increase their vote bank.

On the union government's mega plan to merge 10 banks into four, he said the move would only lead to "more chaos".

The rural economy was in distress and those who lost jobs (in cities and towns) were returning to their villages, he said.

"Who is BJP is trying to fool by talking about five trillion economy when the GDP is five per cent?" Owaisi asked "It is your (BJP) policies which brought us to this stage," he said.