Chandrayaan-2 Mission: Off to the Moon

By the time this edition of the Free Press Journal lands at your doorstep, a 15-storey high rocket nicknamed 'Bahubali' would have slung the Chandrayaan-2 spacecraft into a parking lot in the Earth’s orbit.
FPJ News Service 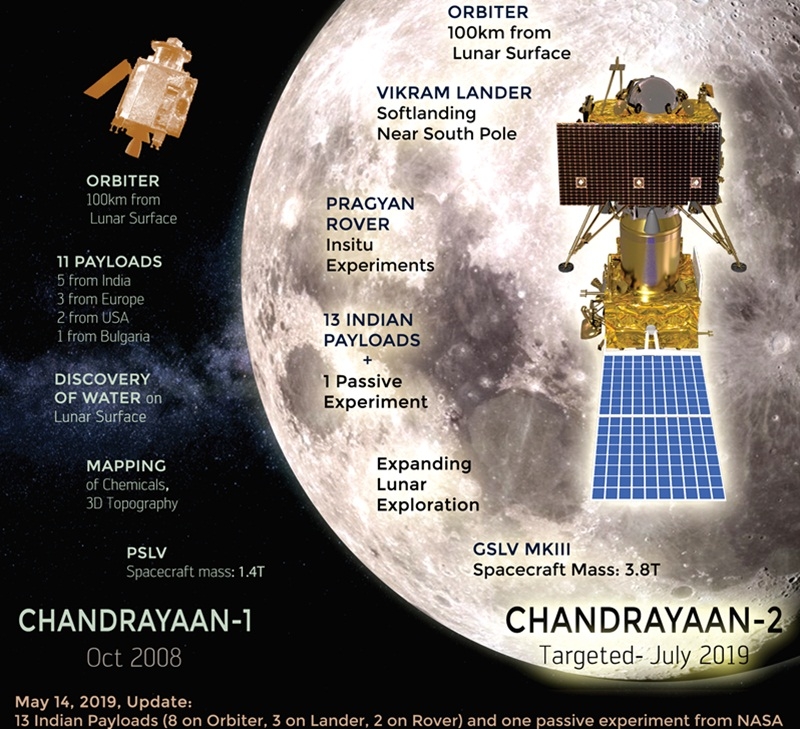 PM Modi’s government, in its second avatar after an emphatic poll triumph, has decided not to rest on its laurels. Two months in office, the dispensation is literally promising the moon, which they hope to deliver two months down the line with an ambitious Chandrayaan-2 project.

Sriharikota: By the time this edition of the Free Press Journal lands at your doorstep, a 15-storey high rocket nicknamed 'Bahubali' would have slung the Chandrayaan-2 spacecraft into a parking lot in the Earth’s orbit. The nickname 'Bahubali' is rather appropriate as the hero in the hit film by the same name had lifted a heavy 'lingam.'

After its lift-off from Sriharikota, the Chandrayaan 2 will begin a journey to the south pole of the moon for a soft landing. The 3.84 lakh kilometres journey will take nearly two months to complete. The 20-hour countdown to the launch at 2:51 am on Monday – weather conditions permitting -- began on Sunday morning. President Ram Nath Kovind was at the site to watch the launch, which testifies to the nation’s ability to build high-tech space equipment at a relatively low budget.

The equipment involved in the Chandrayaan 2 mission -- from its orbiter to lander and rover -- has been designed and manufactured in India. It is a sequel to the successful Chandrayaan 1, which helped confirm the presence of water on the moon in 2009.

1. An analysis published by ‘Sputnik International’ has claimed that the approximate $124-million price tag of the Chandrayaan

2 is less than half the budget of Hollywood blockbuster Avengers Endgame ($356 million).

The Indian space agency has a budget that is 20 times less than NASA, its US counterpart.If India succeeds in this mission, it will become the fourth country to soft-land a spacecraft on the lunar surface after the US, Russia and China. Israel had tried earlier this year but failed.

Incidentally, the project director and the mission director of the Chandrayaan 2 are both women. However, ISRO chief K Sivan claimed that the time for celebration hasn't come yet. "The 15-minute final descent on the moon will be our most terrifying moments, because we have never undertaken such a complex mission," he said.

Through Chandrayaan-2, in which home spun technology has been used, scientists aim to expand India's footprint in space, shed light on unexplored section of Moon-- the South Pole region -- enhance knowledge about space, stimulate advancement of technology and promote global alliances.

But why the South Polar region of the Moon? According to ISRO, the lunar South Pole is an interesting surface area which remains in shadow. There is a possibility of the presence of water inpermanently shadowed areas around it, the agency said, adding craters in the South Pole region also have cold traps and contain fossil record of the early solar system