The BBMP held an enquiry deploying engineers and concluded that a contractor was allegedly trying to illegally lay a pipeline with the help of heavy duty earthmovers.
Shankar Raj 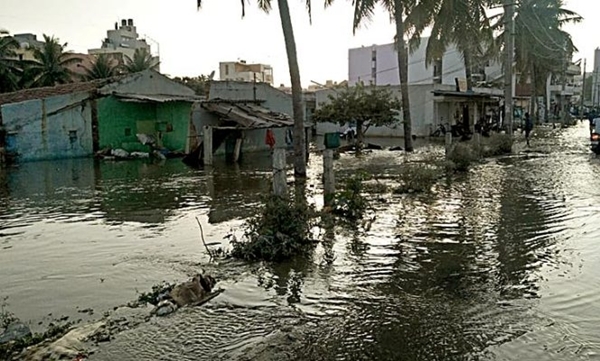 Bengaluru: The breaching of the massive Hulimavu lake in Bengaluru, resulted in the flooding of over 250 houses in three localities and affecting over 1000 people, was a man-made disaster, according to the Bruhat Bengaluru Mahanagara Palike (BBMP – the civic body).

The BBMP held an enquiry deploying engineers and concluded that a contractor was allegedly trying to illegally lay a pipeline with the help of heavy duty earthmovers. He created a small drain to let a little water out to the stormwater drain, but the bund gave way resulting in water rushing into houses.

The contractor, who is absconding, had not sought permission from the BBMP to carry out the works on the lake.

While more than 1,000 families in half a dozen neighbourhoods were affected by the sudden flooding, 300 cars were badly damaged. Some were seen floating.

City mayor M. Gautham Kumar said the contractor had illegally taken up development activities around the lake over the past two days and had tried to drain it by making a small hole in the bund.

The contractor had promised he would place sandbags so that the water would not enter residential areas and flow only towards a nearby storm drain. However, the bund breached and the contractor vanished.

Fire and emergency services personnel carried out relief works. Pumps were deployed to flush the water out of basements of residential complexes as many families were moved to three rehabilitation centres.