The roadshow will take place in honour of PM Modi. The roadshow previously planned for Tuesday will now be held today with a change in the party's schedule and will be held this afternoon from Patel Chowk to Parliament Street.

The two-day national executive meeting of the BJP will be held at NDMC Convention Centre here starting today.

BJP's national president JP Nadda along with Union Ministers including Home Minister Amit Shah, Chief Ministers of BJP ruled States and other senior party leaders will participate in the event.

The roadshow will take place in honour of PM Modi. The roadshow previously planned for Tuesday will now be held today with a change in the party's schedule and will be held this afternoon from Patel Chowk to Parliament Street.

Vehicular traffic movement is likely to get affected in parts of Delhi and a special traffic arrangements have been put in place to allow smooth flow of traffic, the Delhi Police said.

This is the first major meeting of the party after the landslide victory in Gujarat. Earlier, in his home state of Gujarat, PM Modi organized a mega road show covering a distance of more than 50 kilometres for more than five hours.

"Bhartiya Janta Party (BJP) is organizing a road show having mass public participation on Sansad Marg from Patel Chowk to Sansad Marg-Jai Singh Road Junction on January 16 from 3 pm onwards. Prime Minister of India will grace the said road show with his presence. Special Traffic arrangements will be in place to ensure smooth traffic management in the vicinity of the roadshow route," said Delhi Police in a statement.

Traffic Advisory!
To mitigate the heavy volume of traffic on the stretch of Ring Road and Mathura Road due to the extension of the Ashram flyover, the following traffic arrangements have been made for the ease of commuters. pic.twitter.com/79cxXvM38V

Delhi Police has advised people to avoid the above-mentioned roads, stretches and areas the roadshow will cover.

Before the national executive, a meeting of the party's national office bearers, state unit presidents and various organisational secretaries will be held at the BJP headquarters. 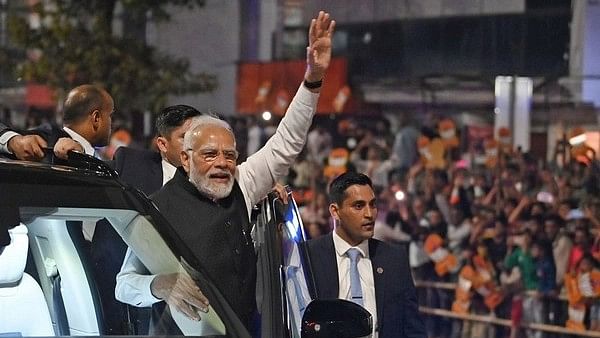