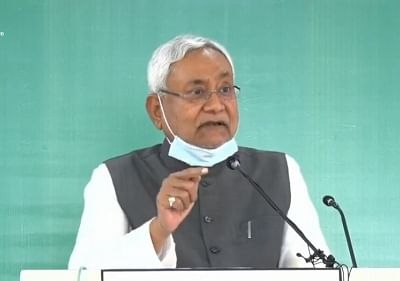 Chief Minister, Nitish Kumar who reviewed the sudden growth in Corona cases said Patna was the worst affected as 102 positive cases have been reported followed by Gaya, a Buddhist pilgrimage centre with 48 cases.

Nitish said, "in last five days, Corona positive cases have gone up to 200 from 28 on December 27." He claimed that a large number of people coming to the state from outside for New year's celebration is causing a sudden surge in the corona cases

The 26 years old, a resident of high profile IAS colony at Kidwaipuri in heart of the capital had returned from New Delhi after meeting his brother who had come from England.

Chief Minister advised people to be alert and follow the covid protocols strictly. He admitted third wave of corona has entered Bihar.

At present,samples are sent to New Delhi for lab tests and reports are delayed.Delay in making Patna lab was because of non_availability regent chemical in the open market, Pandey said.

State government has banned New year's celebrations in the parks and closed Gandhi Maidan, Sanjay Gandhi botanical garden and other parks in the state capital.Crisis management group will meet tonight to take a decision on suspension of classes in schools.

In neighbouring Jharkhand,prohibitory orders under section 144 have been issued to prevent crowds.People have been told to celebrate New year's inside their houses. Bihar cabinet approves project worth Rs 4,606 cr for modernization of 149 ITIs; in collaboration...