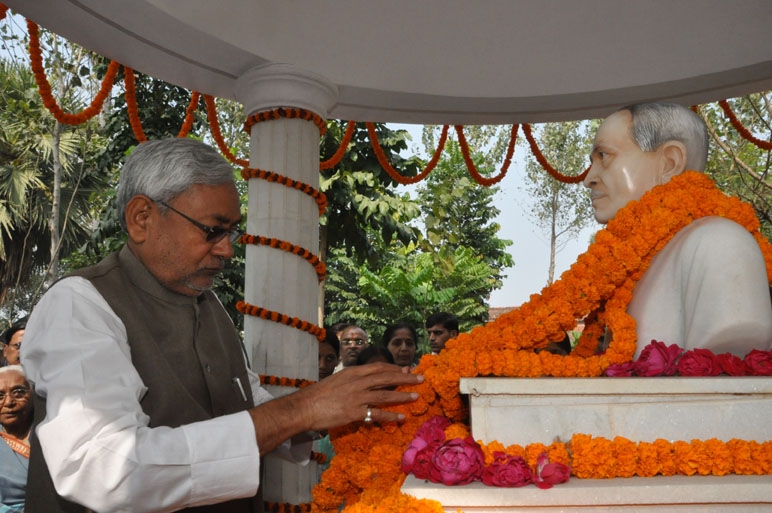 Patna: Bihar cabinet’s decision to celebrate the birth anniversary of Ramlakhan Singh -- father of Chief Minister Nitish Kumar -- on January 17 as a State function has been challenged by the opposition and a former IPS officer.

Ramlakhan Singh was a well-known Ayurveda practitioner at Bakhtiarpur, 40 km from here. Singh died in 1978.

The Bihar cabinet, at its meeting presided by the Chief Minister, on January 5 approved a memo sent by the cabinet secretariat department and decided to hold state government programme (‘rajkiya samaroh’), at Bakhtiarpur, in honour of the "great freedom fighter, Ramlakhan Singh Baidya," where a statue of Chief Minister's father is installed.

``Every year, on January 17, the state function will be organised in honour of Singh,’’ the government decided.

Amitabh Kumar Das, a former IPS officer of 1994 batch, has challenged the decision of Bihar cabinet and questioned the credentials of CM's father as a freedom fighter.

Das has sent a letter to IG of prisons seeking details of Ramlakhan Singh as ‘prisoner’ during freedom movement -- when he was arrested, the duration of his detention, name of the jail and offences for which he was detained.

The former IPS officer also submitted a petition to the Governor, seeking his intervention and requested that the bona fides of the late father of the chief minister as freedom fighter be ascertained.

On Sunday, Das presented a research document – ‘August Kranti’ -- written by Professor Baldev Narain and released the names of freedom fighters of Bihar. According to him, in the 400-pags book, there was no mention of Ramlakhan Singh as freedom fighter.

The Opposition RJD, too, has objected to the cabinet decision to honour the CM’s father every year as a freedom fighter and observe the birth anniversary as a State government event. Over 45 lakh litre liquor seized in Bihar during 2021