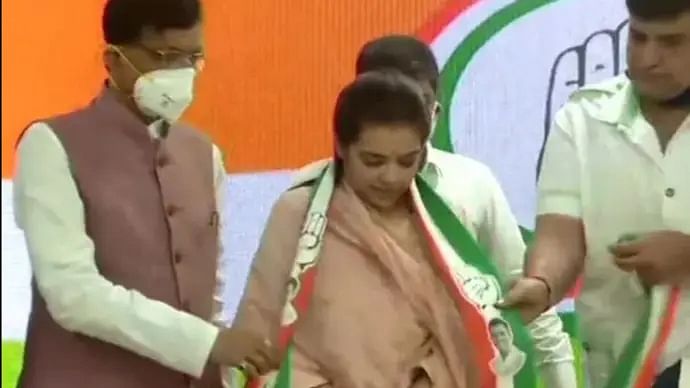 Congress on Wednesday inducted two freshers into the party and assured their candidature in the upcoming assembly election. Subhashini Yadav, the daughter of the former union minister, Sharad Yadav, was admitted into the Congress by the Bihar Pradesh Congress Committee president, Madan Mohan Jha.

On joining the party, Subhashini said she would contest the poll from Bihariganj in Madhepura district. She recalled her father represented Madhepura Lok Sabha constituency several terms and it was his political field. Sharad has a palatial house at Madhepura town. Once he had defeated Lalu Yadav too. Currently, he is the president of the Loktantrik Janata Dal. Her daughter said Sharad Yadav was admitted in a Delhi hospital.

Lav Sinha (inset), the elder son of the actor-turned-politician former union minister Shatrughan Sinha,who represented Patna Sahib in Lok Sabha till the 2019 election will be the Congress candidate from the Bankipore assembly constituency. Sinhas have their paren­tal house at Kadamkuan locality close to Mahila Charkha Sam­i­ti house of Jayaprakash Narayan.

Nitin Navin of the BJP has been representing Bankipore since 2005. Earlier, his father Navin Kishore Prasad Sinha was the legislator from here.

Mamta Sahu, a former member of the National Commission for Women, revolted against the BJP and filed her nomination from the Bankipore assembly seat. She was the president of the women’s wing of the BJP too.

Sahu, a resident of Dariyapur Gola in the heart of Patna, had given full page ads in English and Hindi newspapers staking her claim on the seat, displaying her qualification. She expected support of the business community through her ad. Sahu had met BJP president JP Nadda during his visit, but her claim was ignored.

The Leader of opposition, Tejashwi Yadav (in pic), on Wednesday filed his papers from the Mahuva constituency in Vaishali and he­ld a roadshow. His bro­ther Tejp­ra­tap filed his pap­ers from Hasanpur in neighbouring Samastipur.

Meanwhile, Oxford aluminus Manish Bariyar will contest as independent from Bankipur. Bariyar has quit his A-grade job in the Ministry of Commerce and is now on the campaign trail. Also, CM Kumar promised Rs25,000 to girls for passing std 12, Rs50,000 for clearing graduation. 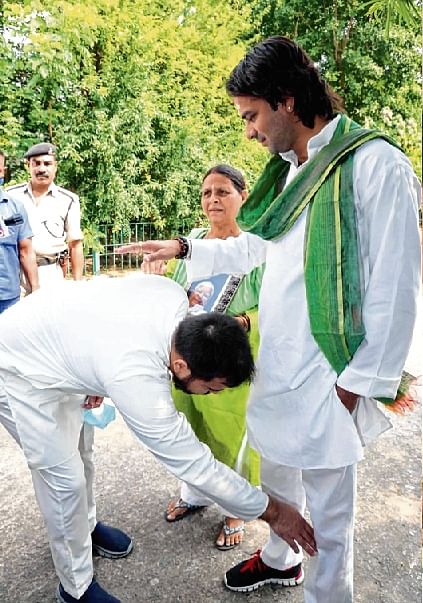 Tejashwi seeks the blessings from his elder brother Tej Pratap as his mother Rabri Devi looks on. | —ANI

RJD national vice-president Shivanand Tiwari on Wednesday objected to the statement of the Union minister of state for Home, Nityananad Rai, “if the RJD was voted to power, Bihar will become a shelter home for the terrorists from Kashmir.”

In an election meeting at Mahnar in Vaishali district on Tuesday, Tiwari said, “Rai had warned the people against voting for RJD candidates and cautioned them if the RJD came to power, terrorists from Kashmir will shift to Bihar.” He said by making such statements, Rai was trying to divide society on communal considerations. He commented the Union minister was challenging the administrative capacity of the CM, Nitish Kumar, by apprehending the state may become a shelter home of the Kashmiri militants.

Meanwhile, BJP released its 4th list of 35 candidates. It has named all its nominees for the 110 seats.

He recalled in the 2015 assembly election when the JD-U, the RJD and the Congress were in alliance, similar statements were made by the BJP leaders, Amit Shah and Giriraj Singh. They had said if the RJD came to power, Bihar may become the hub of terrorism.

Giriraj Singh in an election meeting at Araria had said victory of the RJD would be celebrated in Pakistan where crackers would be burst.

For making a communal speech in 2014 elections at Deoghar in neighbouring Jharkhand, the Election Commission had imposed a ban on the public meetings of Giriraj Singh.