Leaders of SDPI, a fringe Muslim organisation, have been named
Shankar Raj 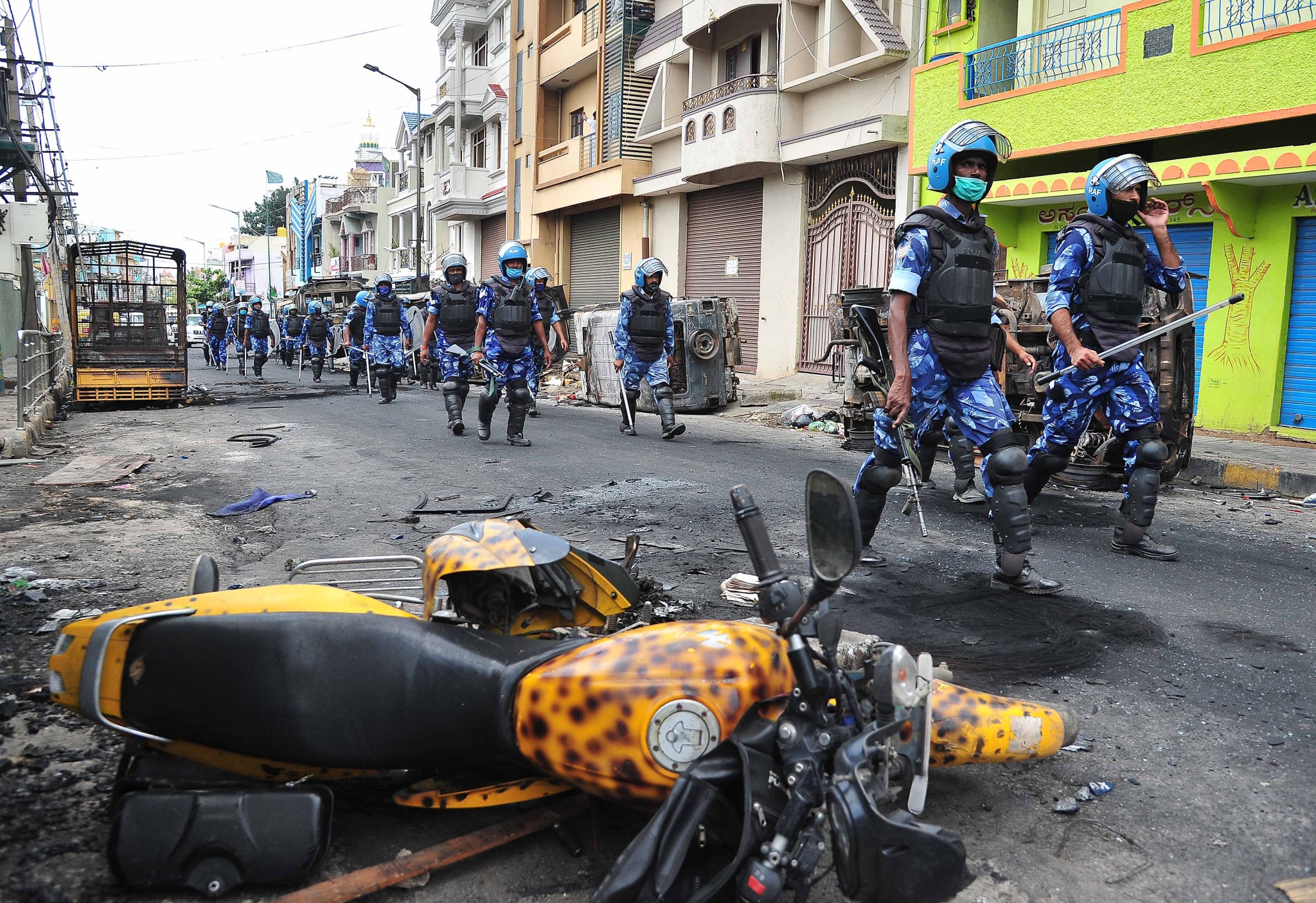 Bengaluru: The city police Thursday filed as many as 12 FIRs against 17 main accused in the mob violence on Tuesday night that saw three people dead in police firing and over 150, including many policemen, injured in eastern parts of Bengaluru.

Though the FIR has not cited any organisation for the violence, prominent leaders of Secular Democratic Party of India (SDPI), a fringe Muslim organisation, have been named. Five people, including SDPI’s Bengaluru district president Muzamil Pasha, have been arrested even as there was a growing chorus to ban the organisation.

According to the FIRs, five people led the gang of 200-300 people armed with machetes and other weapons and the crowd raised slogans to hack the cops to death. The mob was armed with plastic bottles filled with petrol which they hurled at cops.

All this clearly indicates that the violence was pre-planned.

Nearly 150 people have been arrested so far on charges of arson, stone-pelting and assault on the police. The police said that accused Naveen has also been arrested allegedly for posting "derogatory" material on social media.

The mob had attacked two police stations and set fire scores of vehicles allegedly irked over the derogatory social media post. The mob also set fire local MLA Akhanda Srinivasamurthy’s house and destroyed other dwellings in the locality. The MLA was not at home at the time when it was set on fire.

The Bengaluru Commissioner of Police has extended the imposition of Section 144 of Code of Criminal Procedure (CrPC) in areas under DJ Halli and KG Halli police station limits till 6 am on August 15 in affected areas.

“A post was put up by a person on social media but police did not take immediate action. The delay in action against the person who posted the content had created tension in the area. They should have taken immediate action who had posted this,” Ahmed told ANI.

The Karnataka Congress has set up a fact-finding committee which will visit the violence-hit areas.

As the situation is tense but under control, hardliners in the BJP – Tourism Minister CT Ravi and Bengaluru South Member of Parliament Tejasvi Surya – have demanded that the properties of Bengaluru rioters be seized immediately.

“In Padarayanapura people vandalised public property, now it happened in DJ Halli and KG Halli. This is not a one-off incident and in order for it to be controlled, I believe properties of rioters should be attached,” Minister Ravi said.

Tejasvi Surya wrote to Karnataka Chief Minister BS Yediyurappa asking him to follow in the footsteps of his Uttar Pradesh counterpart Yogi Adityanath and attach properties of the accused involved in the violence on Tuesday.