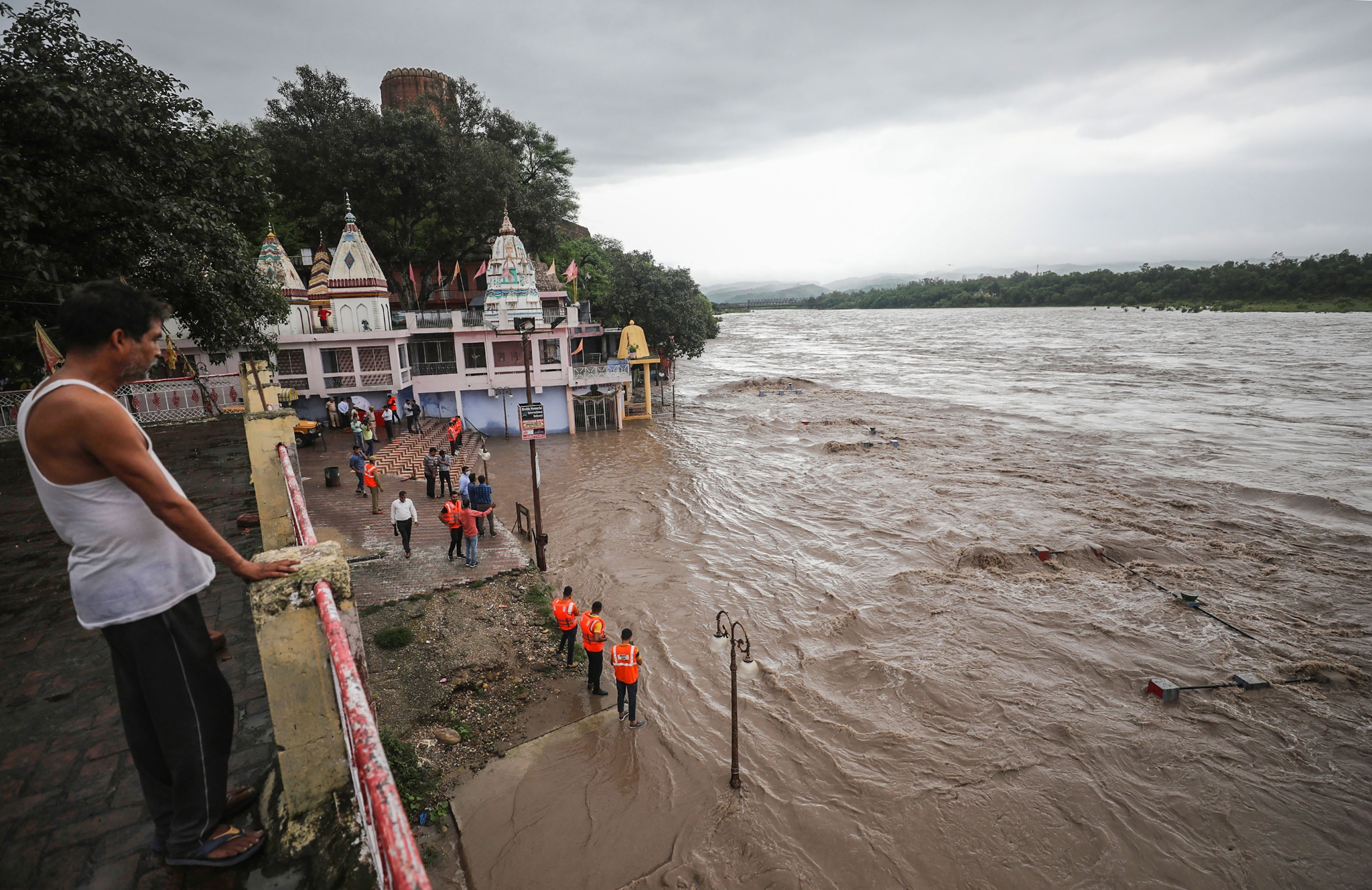 Jammu: SDRF and police men visit the swollen Chenab river as part of their preparedness after authorities sounded an alert due to incessant rains, in Akhnoor, Jammu , Wednesday, July 28, 2021. | (PTI Photo)

A series of flash floods in Himachal Pradesh and the Union Territories of Jammu and Kashmir, and Ladakh killed at least 16 people on Wednesday and damaged several residential houses, standing crops and a mini power plant, officials said.

In Jammu Kashmir's Kishtwar, a cloudburst hit a remote village around 4:30 am, leaving seven people dead and 17 others injured, while at least nine people are dead, two injured and seven reported missing in the flash floods in the hilly state, they said.

In Ladakh, two cloudbursts hit different areas of Kargil, causing damage to a mini power project, nearly a dozen residential houses and standing crops, the officials said, adding that no loss of life was reported in the cloudbursts, which struck Sangra and Khangral on Tuesday evening.

Besides four people, including a woman, her son, a hydro project official and a Delhi tourist are feared dead in Kullu district, he added.

In Kishtwar, 19 houses, 21 cow sheds and a ration depot situated on the banks of a stream, besides a bridge were damaged in the cloudburst.

A search and rescue operation by police, Army and State Disaster Response Force (SDRF) is underway to locate over 14 people who are still missing from the scene of the cloudburst at village Honzar in Dacchan tehsil, the officials said.

Besides, cloudburst also hit near the Amarnath cave. However, no loss of life has been reported. Two SDRF teams are present at the cave and one additional team of SDRF has been deputed from Ganderbal, news agency ANI reported.

Meanwhile, Jammu and Kashmir's Lieutenant Governor Manoj Sinha said he spoke to Union Home Minister Amit Shah over the situation prevailing due to cloudburst in Kishtwar and the Home Minister assured continuous support from the Central government.

"Spoke to Home Minister Amit Shah Ji and discussed situation prevailing due to cloudburst in Kishtwar. Home Minister has assured continuous support from the Central government. The entire nation stands in solidarity with all those affected by unfortunate natural calamity," the statement issued by LG's office read.

"District administration, Police and SDRF team is at Honjar village. An SDRF team is waiting to be airlifted at Jammu while two SDRF teams are on stand-by. An NDRF team from Punjab has been rushed for rescue and relief operations. Out of 38 affected individuals, 17 injured have been rescued and being provided medical care," the statement said.

Meanwhile, condoling the loss of lives due to a cloudburst in Kishtwar district, President Ram Nath Kovind said he was deeply saddened by the death of many people.

All possible assistance is being provided to the affected areas, he said, wishing for everyone's safety and well-being.