While Abhijit wore a bandhgala jacket and dhoti, his wife Esther, opted for a two-toned saree

Indian-American Economist Abhijit Banerjee, and his French-American wife Esther Duflo the Nobel Prize for Economics in Sweden, along with their American colleague Michael Kremer, for "experimental approach to alleviating global poverty." However, unlike other laureates who arrived in high end tuxedos and red carpet worthy dresses, the couple graced the prestigious occasion in traditional Indian attire.

While Abhijit wore a bandhgala jacket and dhoti, his wife Esther, opted for a two-toned saree. Meanwhile Kremer wore a suit. The award comes with a price tag of Rs 6.5 crore and is to be shared among the three winners. Banerjee is the second Indian after Amartya Sen to win the Nobel Prize in Economics. And just like Sen, he is also an alumnus of Presidency College, now Presidency University. On a similar note, he is also the tenth person of Indian origin or citizenship to win a Nobel.

They were awarded the 2019 Prize in Economic Sciences “for their experimental approach to alleviating global poverty.” pic.twitter.com/c3ltP7EXcF

Banerjee was born in 1961 in Kolkata. He is a Ph.D. from Harvard University and a Professor of Economics at the Massachusetts Institute of Technology.

His ground-breaking scholarship apart, the Nobel laureate is also a superb cook and a connoisseur of Hindustani classical music.

His wife Duflo, born in 1972, is the second woman and the youngest person to be awarded the prize in economics. For the record, the 46-year-old was a former advisor of ex-US president Barack Obama. 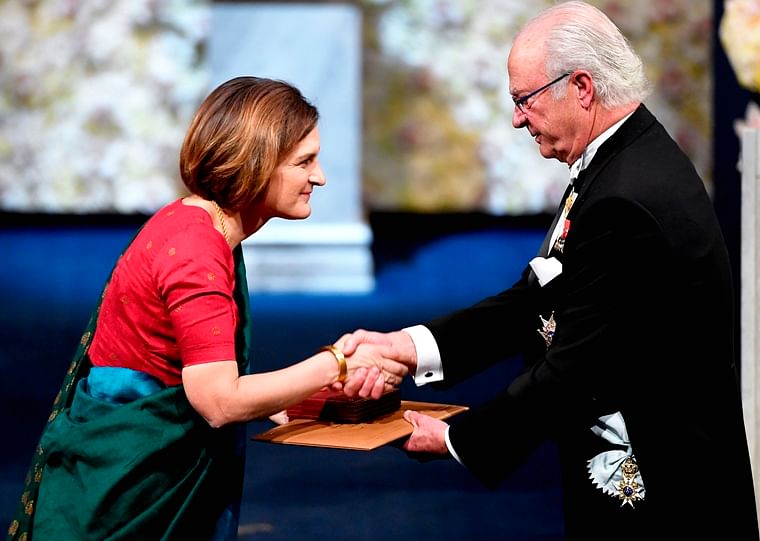 Banerjee was wife Duflo's PhD supervisor and their work, alongside that of Kremer's, focussed on poor communities in India and Africa. The duo got married in 2015 and their co-authored book 'Good Economics in Hard Times' will hit the stands this week.

The two also wrote Poor Economics: A Radical Rethinking of the Way to Fight Global Poverty, which won the Financial Times and Goldman Sachs Business Book of the Year Award in 2011 and has been translated into more than 17 languages. Their research shows which investments are worth making and have the biggest impact on the lives of the poorest people. Their work had "dramatically improved our ability to fight poverty in practice", the Royal Swedish Academy of Sciences, which awards the prize, said.

"As a direct result of one of their studies, more than five million Indian children have benefited from effective programmes of remedial tutoring in school," the Academy said. "Another example is the heavy subsidies for preventive healthcare that have been introduced in many countries."

Duflo is the Editor of the American Economic Review, a member of the National Academy of Sciences and a Corresponding Fellow of the British Academy.

In 2003, Banerjee founded the Abdul Latif Jameel Poverty Action Lab (J-PAL), along with Duflo and Sendhil Mullainathan, and he remains one of the lab's directors. He also served on the UN Secretary-General's high-level panel of eminent persons on the post-2015 development agenda.