HomeIndia90-year-old man from Jaipur discharged after he beats coronavirus; hospital staff greet him with round of applause, flowers

90-year-old man from Jaipur discharged after he beats coronavirus; hospital staff greet him with round of applause, flowers

While medical science warns about elderly patients being more at risk from Covid, this is the second case in Rajasthan when an elderly patient has recovered.

Some good news comes from Rajasthan amid the gloom surrounding COVID19 epidemic. A 90-year-old man was discharged from the hospital on Tuesday after he tested negative for coronavirus. 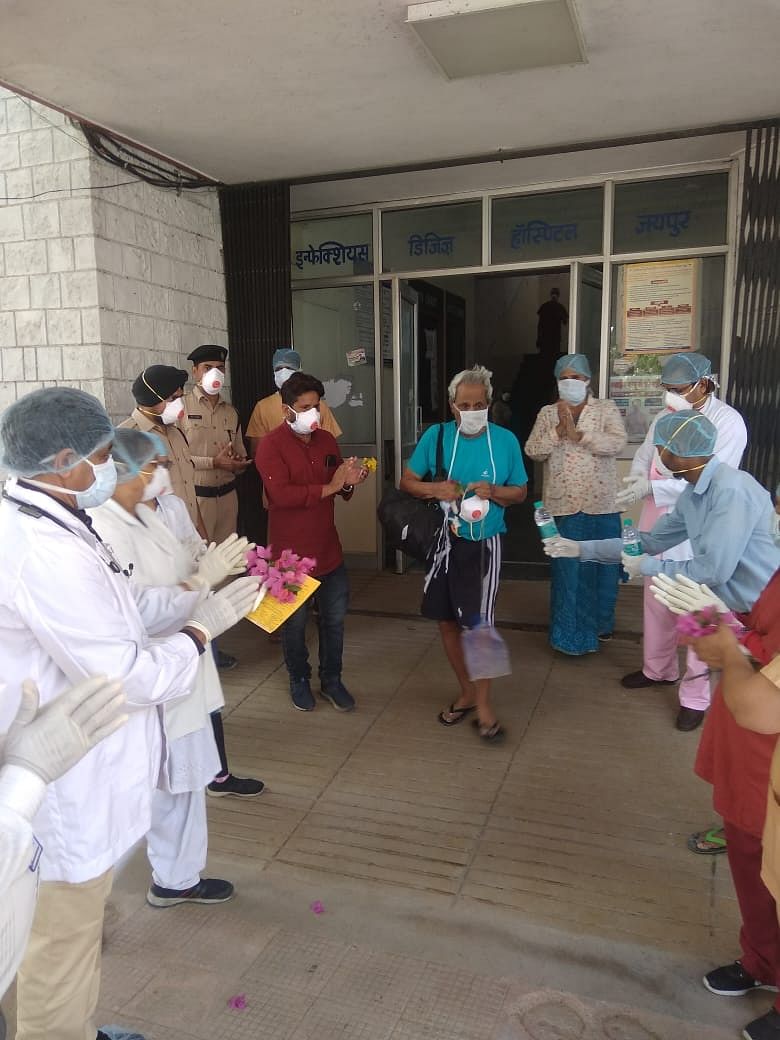 The patient, Bhawani Shankar Sharma, is a resident of Dhuleshwar garden, Jaipur and was admitted to Sawai Man Singh hospital on April 14 after he tested Covid positive. Sharma has a history of hypertension, coronary artery disease and chronic kidney disease. He first tested negative on April 25 and the second negative report was received April 27. Subsequently, after 18 days in hospital care Bhawani Shankar was discharged for home quarantine on Tuesday.

The nurses, doctors and paramedical staff gave Sharma flowers and saw him off. He was given detailed instructions about his own care and told to keep his morale high. 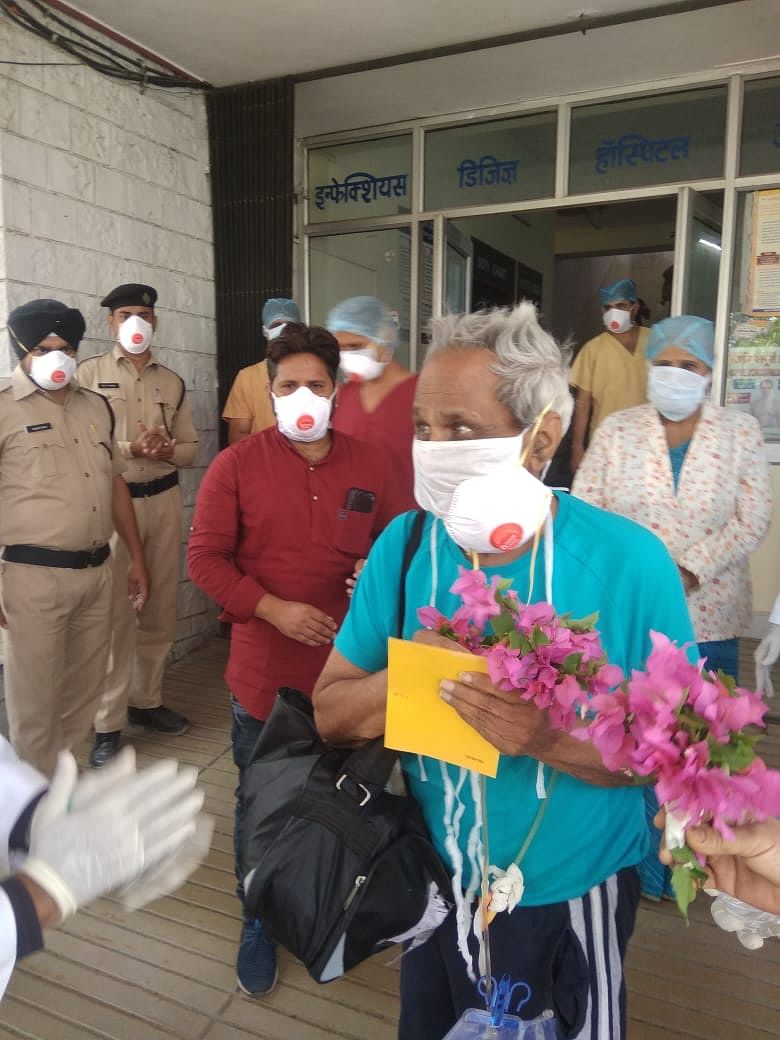 While medical science warns about elderly patients being more at risk from Covid, this is the second case in Rajasthan when an elderly patient has recovered. A few days back a 90-year-old woman from Jodhpur also recovered and tested negative.

Out of the 2,262 persons who have tested positive across the state, 768 are now negative and 584 have been discharged.

Rajasthan Health Minister Dr Raghu Sharma informed, “Recovery of positive in Rajasthan has been very encouraging. Almost one third of those who tested positive have subsequently tested negative. We are in the process of increasing our rate of testing which is presently at 6,000 per day to 10,000 per day. The rate of spread of the infection has also been very proactive. Had it been spreading at the rate of April 14 the total number of positives would have reached 4,077, but we have contained it to 2,262. Total seven places continue to be hotspots and we are an average of 4,000 samples per day. The pendency of reports has also been cleared.” 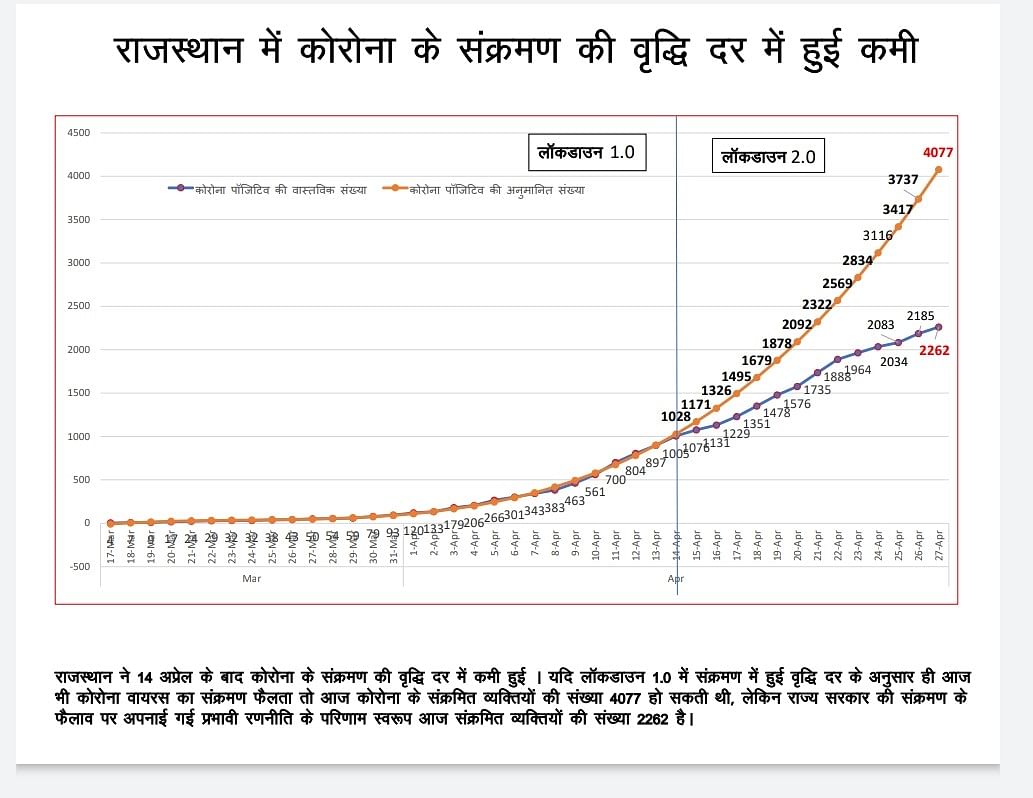 Meanwhile, 73 new cases were reported in Rajasthan on Tuesday. As per the 2 pm report, 23 are from Jaipur, 19 from Kota, 14 from Jodhpur, 11 from Ajmer, 3 from Tonk, 2 from Dholpur and 1 from Sikar. The total number of positives in the state is 2,272. On including 61 evacuees and 2 foreigners the cumulative total of positive patients is 2,335. Total 51 deaths have been reported in the state.