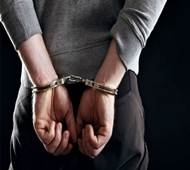 Dubai: An Indian man has been allegedly killed when he resisted a robbery attempt by Omani nationals, following which six of them have been arrested.

John Philip, a fuel station employee who hailed from Kerala, was found dead by the Royal Oman Police (ROP) on Wednesday. Philip had been missing since last Friday and police was searching for him since Saturday after a colleague reported him missing, the Times of Oman reported.

“His body was found. He was murdered,” a senior police official said, adding investigation is on. Money between OMR4,000 and OMR5,000 (over Rs 6,50,000) is missing from the station he used to work in, officials from the victim’s company said.

According to the report, the CCTV cameras were found damaged following his disappearance and its cassettes are missing from the fuel station. Philip, who had been working in Oman for the last 13 years, is survived by his wife Binu and their two children. His relatives had approached the Kerala government and the Indian government to trace him.