Advertisement
Home / Fpj-achievements / SKY IS NOT THE LIMIT

SKY IS NOT THE LIMIT

Mr. V. P. Agrawal took over as Chairman, Airports Authority of India on 1st January 2009. Born on 2nd June 1955, Mr. Agrawal holds a degree in Master of Engineering and Bachelor of Engineering ( Electrical) from IIT Roorkee. His vast experience, with specialization in Airport Planning, Expansion and Modification of Airports, Airport Management and, with a galaxy of professionals, is redefining India’s aerial landscape, through worldclass airports infrastructure. 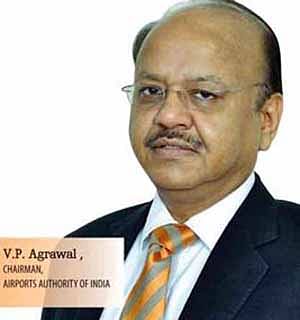 Under him, AAI is transformed into a fast moving efficient service organisation, providing user friendly, safe and secure airport facilities in India. He has transformed more than 60 airports, including Chennai, Kolkata and other Non Metro Airports, and given new direction to Air Navigation Services through Integrated ATS Automation System at Chennai. His special initiative has made GAGAN ( GPS Aided Geo Augmented Navigation) provide accurate signals in space for Navigation of Aircrafts catapulting India to a select band of countries. He is now concentrating on providing ATFM in Indian Airspace for safe and secure aircraft operations in India. Mr. Agrawal has been instrumental in transforming Air Traffic Management in India, which received the “ Jane’s Award 2012” for achieving the best operational efficiency through upper airspace harmonization programme. Among several other awards, he has also been honoured with IIT Roorkee’s Distinguished Alumni Award – 2011.

“ I acquired Masters in Engineering ( Power Electronics and Electrical Drives) and Bachelor Degree in Engineering ( Electrical) from IIT, Roorkee, in 1978 and 1976 respectively, and started my career with CPWD as Direct Class I through UPSC, IES and then ventured into serving in Public Sector Enterprise i. e. in the then National Airports Authority. The journey to chairman, AAI, the merged entity of National Airports Authority and IAAI formed in 1995, started from this point.

Over three decades, it has been full of challenges at various levels. I held various positions in the hierarchy, and every level was very rewarding, helping me to gain experience in various fields.

Holding the top post of an organization is always an honour and does require special traits.

During the airport director days I had the honour of distinct and unparallel feat of relocation of operations from one airport to another in record time of just one week. Srinagar airport operations were shifted to Avantipur airfield as the runway at Srinagar had to undergo recarpeting. The move entailed rigging up all facilities from scratch at Avantipur, which was terrorist infested and had never handled commercial aviation.

As is well known that AAI inherited war torn airfields dating to the second world war, which post Partition, came under the ambit of DGCA. Some cosmetic changes were made at few airports based on the requirements, however, the condition of AAI airports today would clearly reveal that AAI has taken long strides in recent times. In fact infrastructure at 44 airports has been upgraded in various tier 2 and tier 3 cities.

Keeping pace with technology The challenge was to keep pace with ever changing technology, so as to not only enable seamless transition of passengers but also make airports user friendly thus, inducing confidence amongst air travellers and enhance level of safety and security both on the ground and in the air.

The task of modernization and transformation from a passive service oriented organization to a happening fast moving efficient service provider was not easy. Huge funding required with large gestation periods for completing the airport projects was the biggest deterrent. However, a balanced approach of utilizing internal resources, debt, PPP, cost cutting helped to fund the above projects.

Even the recession didn’t stop AAI from completing the projects in time and posting decent profits.

The next big challenge today is the utilization of the created capacities and assets. AAI is now in the process of taking up a massive marketing exercise for promoting airports in the second and third tier cities which have been recently completed.

AAI under my leadership has won several laurels, including Airport of the ear for Chennai Airport by Southern India Chamber of Commerce and Industry in 2010, SAP- ACE award for procurement systems in AAI in March 2012.

Chairman, AAI, has been elevated to the position of PATRON AIPSSPB. Recently Ahmedabad, Amritsar and Trivandrum airports have been adjudged best airports under national competition for steel structure by FICCI- INSDAG. AAI has won Jane’s Awards 2012 and the ATC Global Awards 2013 at Amsterdam for Excellence in ANSP Management and Strategic Advancement in Air Transport. AAI also received “ Golden Peocock Eco- Innovation award” for year 2012 for establishment of paper recycling unit , which is one of its own kind in India.