FIND YOUR OWN TRUTH 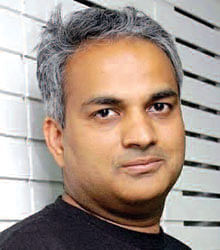 QUESTION EVERTHING, LEARN FROM MISTAKES, AND DO SOMETHING THAT YOU ENJOY, SAYS MAHESH MURTHY

I had to stand for myself

I dropped out of college; I knew I didn’t want to be an engineer but I come from a traditional Tamilian Brahmin Iyer family where education was the only focus – and my decision to stop going to college didn’t sit well with my folks. They said that ” as long as I lived within their walls, I had to obey their will…” They had every right, it was their home; I felt if I truly believed in what I did, I had to stand for myself. I left home that day, have been independent since. Dad didn’t speak to me for years; we eventually made up and are together again, but on my terms. I get a sense that he might be proud of me now.

Dropping out and leaving home is perhaps the most significant thing I’ve done. All the rest seem easier, and seem to have flowed from that… I left home when I was 17. And by the time my ex- classmates did MBAs or Masters, I was a highly- paid creative head at an ad agency.

When I was jobless and homeless, I had some money from my NTS scholarship – I took that and paid Rs.

50 a night at a fleabag hotel in Secunderabad – and scoured the paper for jobs. Only one ad did not specify that I needed to be a graduate – it was for a vacuum cleaner company. I talked myself into that poorly- paid sales job.

Then got a job in advertising as a creative.

I did not suck at it.

Advertising led me from Hyderabad to Bombay to Delhi to Hong Kong. I did strategy and film work to re- launch MTV in India, and learnt to write and direct commercials.

Then was attracted by digital in 1993 – 20 years ago. Joined a US digital agency – perhaps the world’s first – in 1994, helped design and launch ahoo and Amazon globally.

Moved to a startup that sold ecommerce software to brick- andmortar stores. This was bought by Intel. I decided to stay at home on an island off Seattle and trade derivatives.

Then got called by Channel V to head the India operations, turn them around. Did that, helped sell that to Star TV. Liked being back.

Started dabbling by investing in startups… Later started Seedfund with two partners – and we’re perhaps the most awarded and successful fund in India today. I felt India could do with a different kind of brand management consultancy – one with digital blood in its veins, and started Pinstorm in 2004.

I tried to implement my learnings, build a firm that did not repeat others’ mistakes. I didn’t like how people craved and misused designations.

I remembered my roots and said I should always be open to hiring someone like me, and now it’s mandatory that no appointment ad from Pinstorm asks for educational qualifications.

I think I can look at a complex situation and size it up fast, find a lever to change it quickly. I have learnt to learn from mistakes – I have made so many over these 30 years! I also have a deep and near- complete disrespect for most bookish learning. I find Kotler worthless when it comes to understanding how marketing works in the modern world… I find most conventionallyheld theories of marketing are nonsense… . I believe one person, one company, one bunch of people, one brand can change the world. And, I’m not scared of anyone’s reputation.

I think any of my companies can take any world leader on.

I travel whenever I can

I generally spend time across my four loves: Seedfund, Pinstorm, my kids and travel. I love being a Dad.

And then I travel. Am now at 60 countries or so – and know there are some 120+ more to go to… I delegate as much as I can so I do the stuff I’m okay at- mostly strategic or guiding startups or higher level creative calls.

I do travel to speak every couple of weeks. And tweet a few times a day update stuff on Facebook and Google Plus. Have inadvertently landed up with tens of thousands of followers online. It’s a different challenge keeping up with them.

You don’t need to focus on just one thing

Richard Feynman is an inspiration.

Here was a guy who played the drums in the Brazilian carnival, picked locks, had a varied romantic appetite and won a Nobel prize. I learnt that if I liked a few things, it was perfectly fine to do them all… I’m fortunate my job lets me meet hundreds of bright aspiring entrepreneurs.

Hearing their thoughts and experiences keeps me informed and inspired.

Success is a starting point

To me, success isn’t about being a billionaire. It’s about being truly happy that you’re doing something you love, using your talent and passion and changing the world in some way. I also think this success is the starting point. The world tries to stop you from following your dreams.

But that’s getting from minus 10 to zero. There still is a zero to 10 after that. What you do with that success is what can be inspirational and world- changing… In retrospect, a few approaches that seemed to help me are: ( 1) question every single thing ( 2) accept nobody’s answer as the final one ( 3) people are the same the world over – an Indian consumer is not very different from a Chinese consumer ( 4) people don’t buy cheapest – they buy the best they can afford.

No one knows everything. No single body of knowledge is divine authority. Question, challenge, find your own truth.