Songs of resistance: Revolutionary music and poetry has brought together protesters across India 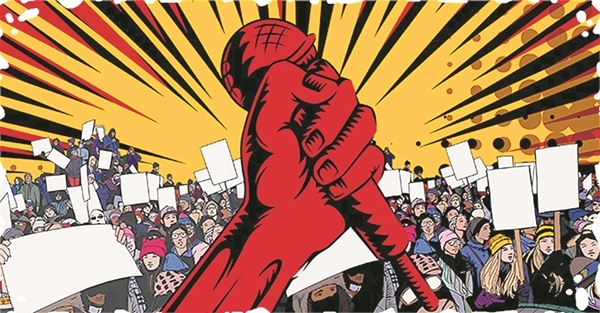 We've chosen a path of struggle…

So that life is not awash in tears

So that the evening is unafraid, the night free of fear

So that the dawn doesn't awaken teary-eyed

Not many among the all-women crowd at Delhi's Shaheen Bagh singing along are aware that the same revolutionary number enthused workers, labourers and tribals through the ’60s and ’70s.

The resonance of the words with the contemporary times seems to touch the crowd. Hands emerge out of shawls to keep beat with claps. And just like that past midnight the air is charged with an infectious energy.

And this is in the Delhi winter, on the 34th day of a peaceful siege of an arterial highway in the Indian capital protesting the Citizenship (Amendment) Act (CAA), the National Register of Citizens (NRC) and, more recently, the National Population Register (NPR).

Both the ruling dispensation and the opposition seem to be shocked with the extent and intensity of a movement which seems to be growing organically, fed by revolutionary music and poetry which come together as songs of resistance punctuated with “Hum kya chahate? Azadi!”

“This is a protest for our dignity as human beings. Now nothing can stop us,” says Nazuka Anwar, shivering in tightly wrapped shawl. The largely working class gathering, from around Delhi is picketing the highway to demand repeal of the legislations. We turn to her neighbour Ganga Kainth and she says:

“Once they finish persecuting Muslims they'll come after Dalits like me. It is best we stick together and fight.” Both the girls who work as conservancy workers don’t know the words of the song but clap nevertheless.

While their peaceful protests and in huge numbers make headlines across the world, how the songs of resistance from various people's movements are keeping protestors mobilised, enthused and driven is not lost on those following this largest protest of its kind.

The protests may have been sparked with anger over enforced legislation and the unleashing of state-terror on the Jamia and JNU campuses but growing flames are now throwing up several other issues like unemployment, job loss, inflation and rising cost of living and more.

So, 1,500 km away in India's financial capital of Mumbai when over 25,000 converged at one of the world's largest slum neighbourhoods, Dharavi on December 22, the song a group of Wadaar community members chose to sing was very telling: Saanga amhala Ambani, Adani, Tata kutha haay ho?/ Saanga dhanacha saatha na aamcha waata kutha haay ho? Saanga dhanacha... (Tell us where our corporates have reached?/ Tell us where they hold their stock of wealth and point out our share in it?)

Activist, revolutionary balladeer and music composer for over three decades Shahir Sambhaji Bhagat puts it in perspective. He says these songs cut across divides as they talk of freedom.

“Powers-that-be want only one kind of cultural ethos, the one they dictate, to be forced down everyone's throats. Movements like the current protests against CAA and NRC rudely awaken those drunk on power reminding them of diverse/ multiple cultural identities which seek their own signature articulation of injustices and inequalities.”

According to him given the hugely exploitative social structures in India “which keep discovering newer variants of exclusion and discrimination while cunningly reinforcing old ones,” there has been a legacy of songs of resistance going back even to the early 15th century.

“Brahmanical hegemony denied this rich legacy any documentation and consciously even tried to invisibilise it. But even without access to the written word, Dalits and Adivasis have found their own way of keeping it alive aurally,” he explains and adds, “I've often been gobsmacked on coming face-to-face with elderly women who don't know to read/write at all but can yet rattle off hundreds of such songs which they keep alive by singing.”

Echoing Bhagat’s views on the way Dalit bhakti poets’ articulate socio-religious expression of the revolt of the masses against discrimination, Kolkatan social historian Meghana Kashyap says: “These works represented aspirations of the downtrodden as against interests of the twice born.”

She underlines how the Bhakti movement was itself peculiarly paradoxical. She cites works of saints like Ravidas, Namdev, Tukaram, Eknath, Chokhamela and Kabir who trash Brahmanical orthodoxy at every opportunity and points out how these poets are often seen as an inspiration for anti-caste agitations. “But it is not all free of agenda,” she warns.

“Saint-poets and their works were only accepted because - unlike latter Dalit compositions which talk of radical change through aggressive, quasi-militant protests – they kept to the domain of the sacred, often borrowing paradigms from the same dogmatic Hinduism they sought to attack.”

Bhagat pointedly credits Dr Babasaheb Ambedkar with recognising the power of culture to drive change and challenge inequality and discrimination very early on.

“Babasaheb is on record to say how even ten of his speeches don't pack as much power as one song by a shahir who takes awareness to masses. Annabhau Sathe, Namdeo Dhasal, Narayan Surve have all been influenced by this thought to take his message forward.”

Kashyap mentions the rich tradition of protest songs in Bengal that dates back to the 19th century and colonial period. “There was a tradition of questioning social hierarchies in the Vaishnav tradition which found a lot of following in the region. The renaissance was a period of questioning and this led to the creation of many songs questioning norms and mores,” she explains.

She cites the instance of eminent novelist Bankimchandra Chattopadhyay (1838-1894), who wrote Vande Mataram. “It became the rallying cry inspiring nationalists to protest colonialism. The anti-Partition movement of 1905 against the proposed division of Bengal also saw processions, slogans and songs become the order of the day.

In fact, Rabindranath Tagore (1861-1941) composed Amar Sonar Bangla (My Golden Bengal) around this time which later became the national anthem of Bangladesh when it came into being in 1971.”

She recalls how by 1975 this momentum saw a wave of urban protests at Brigade Parade Ground (Maidan) led by the Left against the Emergency with new songs of resistance which took on a hitherto unseen bite and aggression.

Over 1,800 km away 65-year-old Shanker Singh, a founder member of the Mazdoor Kisan Shakti Sanghatan along with Aruna Roy and Nikhil Dey, feels aggression is necessary. Acknowledged as one of India’s leading figures in people’s theatre, for nearly 25 years he has used his uncanny, incisive wit and keen political insight to instinctively communicate complex issues in a familiar idiom.

“We want the message to reach masses but also give ourselves some relief. Slogans and fiery speeches can become monotonous. This entertains without taking away from the movement.”

Bangalorean singer-composer Sunil Koshy speaks of oppressor-versus-oppressed-narrative which has always resonated in the songs of resistance in God's Own Country — Kerala. He recounts how this began when Socialist winds blew through the state in the late ’50s.

“When a Communist government came to power in Kerala in 1957, a special obelisk was erected in memory of martyrs of 1857 which included many peasants and workers.

A song to mark their martyrdom Balikudeerangale was written by legendary poet-lyricist Vayalar Ramavarma, and composed by the illustrious G Devarajan – the duo became the most famous lyricist-composer team in Malayalam bringing songs of resistance from the streets to celluloid.”

He remembers how the Communist agenda has been part of the narrative ever since. “Thulabharam (which started off with the socialist refrain ‘Workers of the world unite, we have nothing to lose but our chains!) Punnapra Vayalar (where the song “Comrades, Onward!” became a chartbuster), Mooladhanam (Named after Marx’s seminal work, this film began with a song 'From every drop of blood shed for the cause, will arise a thousand comrades more!') Ningalenne Communistakki, Anubhavangal Paalichakal, Neelakkannukal (a song here went, “We refuse to die, we refuse to be cowed down, and don’t you dare think you can make us go on bended knees to kiss the Capitalist behind!).” As songs from these iconic films become movement anthems he feels, “Songs of resistance have come full circle.”

Well-known classical vocalist Shubha Mudgal who often uses music to speak of social issues says: “I keep getting requests to perform and help raise funds for awareness campaigns/social issues. As an artiste, do I just pick from my popular repertoire or include material relevant to the cause? I have, over the years, worked on developing a repertoire addressing specific issues close to my heart including poetry of protest and dissent.”

While underlining saint-poet Kabir’s pre-eminence as a powerful voice speaking against religious dogmas, as early as in the 16th century she underlines how others like Lalleshwari (14th century), and Gorakhnath (11th century) have also pioneered in this direction.

She feels what Kabir and the poets before him forms a continuum of sorts with a contemporary poetry of Dushyant Kumar or Gopaldas Neeraj. “The continuum is reflected in their fearlessness.”

Ye ehtiyat zaruri hai iss bahar ke liye. (Despots have always tried to silence poets/ to ensure their oppression is not called out) It is acknowledgement of the strength of art and poetry.

It represents fearless, courageous freedom that art endows on its believers and practitioners. Written during the Emergency, this ghazal holds true even today.”