Why is a gay liberal sitting next to a conservative Republican? Ellen DeGeneres defends friendship with George W. Bush

Comedian-host Ellen DeGeneres has defended her friendship with George W. Bush, after facing backlash for a photograph with the former US president.
IANS 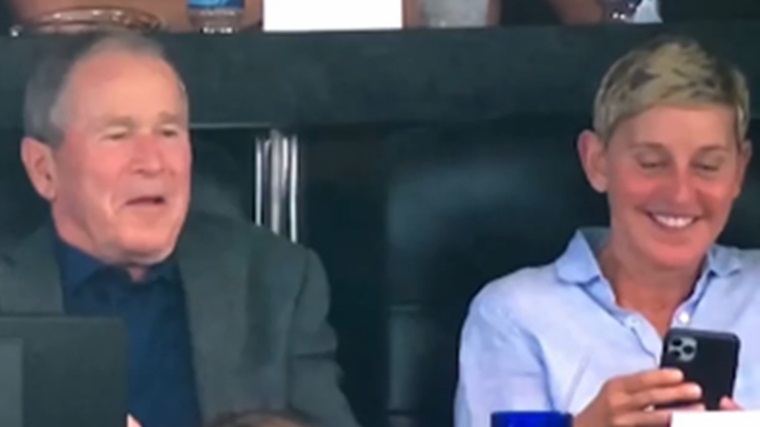 Comedian-host Ellen DeGeneres has defended her friendship with George W. Bush, after facing backlash for a photograph with the former US president.

The comedian came under fire for sitting next to former president at the Dallas Cowboys football game on Sunday.

She addressed the online criticism that came her way during the taping of "The Ellen DeGeneres Show", which will go on air on Tuesday, reports dailymail.co.uk.

"We're all different and I think that we've forgotten that that's okay that we're all different... but just because I don't agree with someone on everything doesn't mean that I'm not going to be friends with them," she added.

The host explained that she and her wife Portia de Rossi were invited to the game by Charlotte Jones, daughter of Cowboys owner Jerry Jones.

"When we were invited, I was aware that I was going to be surrounded with people from very different views and beliefs. And I'm not talking about politics... I was rooting for the Packers," DeGeneres joked.

"So I had to hide my cheese hat in Portia's purse," she added.

In the image, DeGeneres was seen sitting right next to Bush and his wife Laura and Charlotte Jones was opposite de Rossi.

The pair were briefly shown on the Fox broadcast of the game and photographs of Bush and DeGeneres chatting and laughing together quickly went viral.

Several viewers took to social media to express their mixed feelings about Bush and DeGeneres sitting together.

"People were upset. They thought, why is a gay Hollywood liberal sitting next to a conservative Republican president? A lot of people were mad. And they did what people do when they're mad... they tweet," DeGeneres said.