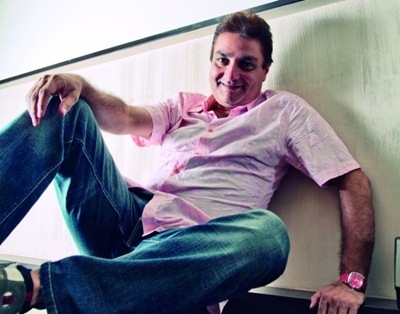 Witty, wise and rather wonderful,VINAY PATHAK talks to VIRAJ SAWANT about breaking stereotypes, his awe of cinema and his upcoming film, GAUR HARIDASTAAN.

One important thing that you need when you meet VinayPathak is time, and one thing that he assures you is a good laugh! Plenty of anecdotes, one-liners and lots of wisdom, is how I would sum up this meeting with the ace actor. Mind you, his sharp wit never leaves space for a dry moment. Bringing back stories from his childhood, when he used to attend political rallies in UP just because Amitabh Bachchan would address them, to catching late night shows all alone, he has done it all. Did you know,Pathakwent to America to do his MBA but skipped business school to attend acting classes? Just when he was about to graduate as an actor, he confessed to his father about not completing his MBA!

Hailing from Dhanbad, VinayPathak has etched his name in the history of comedy in Bollywood. From playing the funny uncle to AishwaryaRai in HUM DIL DE CHUKE SANAM to Shah Rukh Khan’s best friend and adviser in RAB NE BANA DI JODI, he has been around for almost two decades now. In BHEJA FRY he played the mercilessly annoying Bharat Bhushan. A pesky yet lovable character who we eventually fell in love with despite of all his brain-gnawing questions. Again in DASVIDANIYA he played Amar Kaul, a cancer victim who spends his last few days, ticking off things on his bucket list. He has perfectly balanced his list of films with comedy and serious roles but we tend to stereotype him as a comic actor… but he isn’t really complaining!

What was so compelling about your upcoming film, GAUR HARIDASTAAN?
GAURHARIDASTAAN is a biopic. It’s the story of Mr Gaur Hari Das. At the age of 13-14 he fought for our Freedom. The British even jailed him for it.Post Independence he moved to Mumbai and started working for Khadi Gram Udyog. While his children were growing up, one of his sons wanted to study further but couldn’t fit the criteria. A few of his friends advised him to use the Freedom fighter’s certificate. Mr Das gave his son the certificate that was given to him for being jailed during the Freedom Struggle. Since the certificate wasn’t an official one issued by the government, the Principal refused the admission. That’s when Das-jirealised that he had to reassess his identity through the government because he never cared about the certificate and the privileges that came along with it. Funnily, he couldn’t get the certificate easily. Here is where our story starts. The Freedom fighter’s certificate grants you multiple privileges like subsidiary from the government; you get a house, land, free railway pass, pension and many more things. He discovered that many Freedom fighters were still fighting for that certificate whereas many others had obtained it wrongly.

They made him run around for 30 years. Finally, he got his Freedom fighter’s certificate when he reached his 70s, in 2009.

How did you prepare to play the role of an 80-year-old Freedom fighter?
It’s a very well written script. It is Malayalam poet, writer and journalist C P Surendran’sfirst film script. We were extremely happy when he decided to write it. Similarly, this story about Das-ji was unearthed bya journalist. He got his certificate because the media pulled up this issue. So the script plays an important role for me while preparing for the role. Also I met Gaur HariDas-ji many times. Naturally when we have the person in front of us we pick up his traits. He is one of the most unsour men I have ever met.He is also very diligent and patient. He actually has a heavy file full of letters that he wrote to the many Chief Ministers and Prime Ministers for the certificate. Like Das-ji, my father was also a very honest man. He worked with the police force and he was very honest. These two people inspired me for this character.

Das-ji is the most amazing and energetic 80-year-old kid you will ever meet. Whenever Konkonaand I used to meet him at his place, he would accompany us till the building’s gate. Also he is a great storyteller. He told us how he met Gandhi-ji and many things about the Freedom Struggle.

What are your expectations from the film?
See, I’ll say I expect the film to go for the Oscars and all but that’s not what I want. I want the story to reach many people. I have given my 100 percent and done my job. To check how much money it’s going to make, if it will break any box office records or whether the media is writing about it, is not my job. I am more than happy to not bother about these things. The thing I am more concerned about is the script of my next film and my performance in it. I would definitely want more and more people to watch it.