Ranjeet Gupta, the director of Omprakash Zindabad, opens up about working with Om Puri and reveals why he renamed the film after the late actor’s name
Gurpreet Kaur 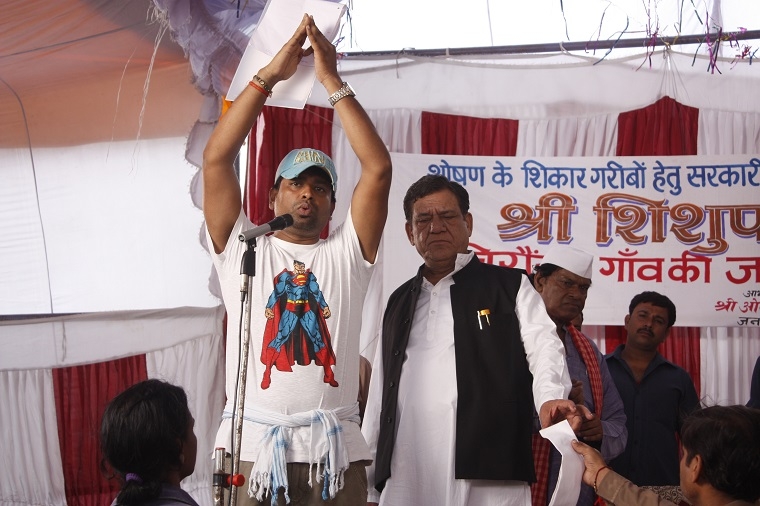 Ranjeet Gupta with the late actor |

Late veteran actor Om Puri's last film, Omprakash Zindabad, is set for a theatrical release on December 18, almost four years after his death. While Om Puri is no more to witness the premiere of the film, director Ranjeet Gupta terms the project as a tribute to the actor, and says Puri never made him feel that he was a debut director on the project.

Ask him how he got Om Puri on board and what it was like to direct him, Ranjeet recalls, “In the start, when I went to him with the script, he did not read it for three months. Finally, we went up to him after fixing a time and narrated the script to him. Still he told us he only has 10 minutes for us before he leaves for work. But surprisingly, he was there with us for three hours after that. He cancelled his dubbing sessions and he was mesmerised with the script. As we all know, no actor readily agrees to do the film after reading the script. But he confirmed it to us then and there and called his manager to adjust all his dates.”

Further praising him, the director adds, “When we told him that we do not have a huge budget, he even said, ‘I can earn money from other films but the satisfaction I will get from this film will be like with one of the Shyam Benegal films’. He spoke to Ronnie Screwvala to release the film under the UTV banner.” Set in Uttar Pradesh, the film depicts how a lower caste daily wager Rambhajjan tries to misuse a government scheme in order to earn some extra money. The film was under the Censor Boards scanner for the longest time, and even got a title change from Rambhajjan Zindabad to Omprakash Zindabad.

Sharing his ordeal with Central Board of Film Certification (CBFC), Ranjeet says, “CBFC refused to see the film for over six months while we were dealing with Om ji’s demise and our release date got extended. We soon realised the delay and went to the Film Certification Appellate Tribunal (FCAT), which took more time. Our film is based on a real story and we brought all evidence to aid our plea. The tribunal finally gave a go ahead but with a condition to change the title to avoid any religious connotations. So we finally changed it to Omprakash Zindabad, which is also Om Puri’s full name (Om Prakash Puri).”

Not just Om Puri’s, the film is also Jagdeep Jaffrey’s last film. The political satire also features Kulbhushan Kharbanda. “We took these three veteran actors for the main role. Om Puri plays a role of a politician who isn’t too popular so he makes this scheme into a scam to gain popularity. Jagdeep sir too joined the film because he really liked his role of a king. Lastly, you will see Kulbushan ji in a comic role, which is rare,” Ranjeet says.

Omprakash Zindabad is produced by Khalid Kidwai under the banner of Panorama Studios.