'Neither pyaar nor PR': Kriti Sanon breaks silence on rumours of dating Prabhas

Bollywood actress Kriti Sanon has been all over the news of late, thanks to her film 'Bhediya' and also because of rumours about her personal life. Recent reports suggested that the starlet was dating south superstar Prabhas, but she has now finally decided to speak up about it.

During the promotions of 'Bhediya', a joke by her co-star Varun Dhawan led to fans assuming that the actor just confirmed Kriti and Prabhas' relationship. However, seems like it was only some friendly leg-pulling and that Varun was only having a bit of fun at Kriti's expense.

Kriti took to her Instagram handle late on Tuesday night and clarified, "It's neither Pyaar, no PR... our Bhediya just went a little too wild on a reality show. And his fun banter lead to some howl-arious rumours." Taking a dig at the media, she added, "Before some portal announces my wedding date- let me burst your bubble. The rumours are baseless!"

She also added a 'fake news' GIF to her story.

Read Also
Kriti Sanon and Prabhas are NOT dating: 'They share a friendly bond as co-stars' Kriti and Prabhas are all set to star in Om Raut's retelling of the epic Ramayanana, 'Adipurush', in which the former will play Sita while the latter is set to essay the role of Lord Ram. The film is slated to release in the second half of 2023.

With 'Bhediya' now released, Kriti also recently unveiled the teaser of her upcoming next 'Shehzada' alongside Kartik Aaryan. Apart from this, Kriti boasts of a strong lineup of films including, 'Ganapath' and 'The Crew'. 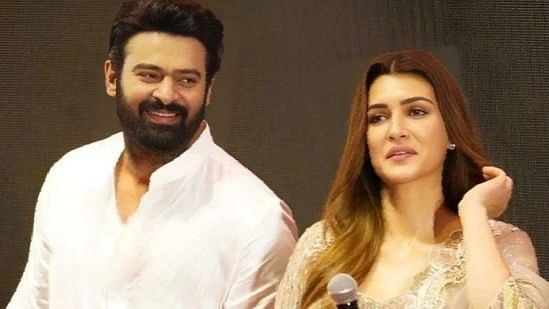 Shamita Shetty: 'I hope people offer me something good after The Tenant'

Director's Cut: 'I am a new filmmaker and I didn’t have any idea about the CBFC procedure,' says...