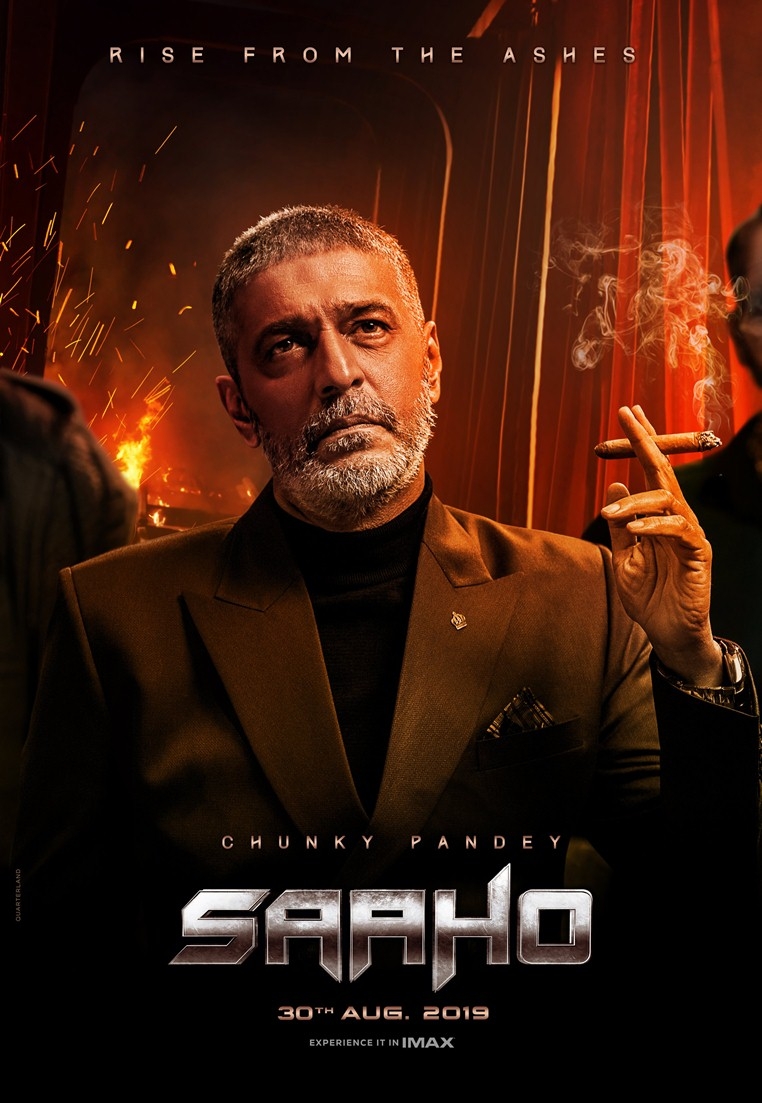 I didn’t recognise Chunky Panday in the super-budgeted but super-nonsensical Saaho, which has defied reviews and has raked in 350 crores in five days. When my nephew, popular actor Mishal Raheja, who was watching the film with me, exclaimed, “Look at Chunky Panday. His getup is superb,” I went, “Nah, that’s not Chunky, I would have recognised him instantly. I have known him for almost a lifetime.” But I did a double flip when my elder brother Gopal too asked me in the interval, “What did you think of Chunky Panday’s performance? He is good, yaar.”

We skipped the film’s climax — by the time Prabhas began flying on screen without wings we took flight from the theatre — we unanimously agreed that while the special effects were expectedly excellent and Prabhas was the power centre of the film, Chunky’s controlled performance as a villain was the surprise revelation.

Talk about a transformation! Chunky was not only physically strikingly different, but with this meaty, negative role he had also shattered the carapace of his humorous, nice-guy image. I have always considered Chunky one of the most amiable actors in the film industry and have raved about his self-deprecating humour to many — there are very few people in the film industry, or indeed elsewhere, who can laugh at themselves; Chunky is one of those few.

But I haven’t praised him too often as an actor apart from his performances as Babban, the trustworthy friend of criminal Munna (Anil Kapoor) in Tezaab and as Munnu in Aankhen in which he teamed up superbly with ace comedian Govinda. The early promise shown in his debut film Aag Hi Aag, in which he stood his ground in the presence of veterans like Dharmendra and Shatrughan Sinha, didn’t quite materialise the way it should have for Chunky’s acting career despite around 40 films as a leading man and constant support from producer Pahlaj Nihalani (Paap Ki Duniya, Mitti Aur Sona, Aankhen).

I first met Chunky when we were doing a combined photo shoot with three pretty girls, Meenakshi Seshadhri, Poonam Dhillon and Padmini Kolhapure, for a Cine Blitz cover story — ‘Three eligible girls hunt for a husband’. Since we needed a dishy-looking but unknown face as a male prop, my photographer friend Rakesh Shrestha suggested Chunky Pandey, the son of the famous heart surgeon, Sharad Pandey.

Chunky fitted the bill of the eligible bachelor to the T and had the three heroines in splits all through the shoot at Sea Rock hotel. He even exchanged telephone numbers with them. After the magazine was released, Chunky was thrilled to see his mug on the cover.

Soon, he became a star and was schmoozing with the creme of filmdom. He invited me for every birthday and New Year party that he threw at his Bandra pad.  Everyone from Rekha to Neelam let their hair down at his annual dos. One memory of his party that has outlived others is Shah Rukh and Gauri hitting the dance floor. Ever jocular, Chunky would take me aside at his parties and whisper, “Come, I will tell you which of the Bacardi bottles at the bar is genuine.”

When Chunky’s career reached a plateau, he flew off to Bangladesh and became a huge star there. On his return to Mumbai, he realised that out of sight is out of mind — a whole new generation of stars had come in and so had a new generation of audience.

Even I lost touch with Chunky though we exchanged greetings on Diwali, Christmas and New Year’s. We reconnected after ages for a piece when I called him to pen a star column for Free Press Journal. Never one to refuse me, he wrote a beautiful piece about his daughter, Ananya who was then making her debut in Karan Johar’s Student Of The Year 2.

After Saaho, I called him once again to congratulate him. He excused himself for panting in between answers due to a recently concluded workout and enthused, “Dinesh, the reactions are pouring in and they are fantastic. We shot at the Ramoji studio in Hyderabad. They were speaking in Telugu and I had gone to shoot unaccompanied by anyone. So I was edgy, short tempered and horrible.”

When the director first approached him for the role, Chunky revealed that he had frankly expressed concern that Prabhas looked far too formidable and may need a stronger looking opponent. But the director was convinced that Chunky was the perfect foil after watching him as the killer Kabir in Begum Jaan.

Chunky quipped, “My wife Bhavna is a bit scared of me after seeing me as the menacing Devraj. And finally after watching me in this film, my daughter Ananya may toe the line — so far I have been toeing the line with her.” Always the one to end on a funny note, he said, “Somebody reacted to my performance with ‘Yeh gareebon ka George Clooney hai’.”