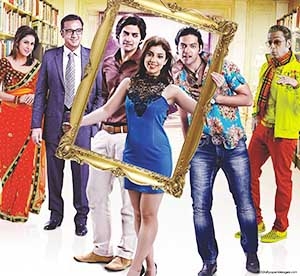 Thankfully there is nothing distasteful about this one. The film starts out as a ‘Chupke Chupke’ wannabe but just cannot sustain conviction to make the attempt stick. Nevertheless, Shuja Ali’s deft handling of his cast and his ability to keep the narration amiable and sufficiently interesting makes this outing harmless and forgivable.
The film begins with the ‘Chupke Chupke’ premise where a love sick Kabir (Ali Fazal) who is in love with Rachna( Anisa Butt) decides to con her uncle Professor Laxmi Nivas(Gulshan Grover) into taking him on as a devoted shishya -just so that he (the former) can get him(the uncle) to agree to the marriage. Of course the Professor’s wife (Amrita Raichand) is more than willing to take advantage of the Guru-Shishya parampara to utilize the more than willing shishya’s talents as a housekeeper cum cook. That’s particularly not something that would sit well in a reality check.
Never mind the fantasy make believe of the set-up. Thereafter it becomes time to insert some ‘Angoor’ styled mix-ups with both Ali Fazal and Gulshan Grover doing double time as Rasiya Bihari and Debu dancer respectively. Razzak Khan is the don who covets bungalow properties and aims to grab them for development profits.
Though the script doesn’t have much to laugh about, the antics of the individual characters do appear smile worthy. Unfortunately it’s not all stitched together well enough to make it sweet. The songs are peppy though and the performances quite remarkable considering that there was precious little to work on-for the actors. Ali Fazal and Gulshan Grover pull off double roles with distinctive flair, Amrita Raichand’s appears to be enjoying herself immensely, Anisa Butt is just about bearable and Razzak Khan impresses as the gay leaning Don. The non-existent humour, though, dampens the spirits quite a bit here!