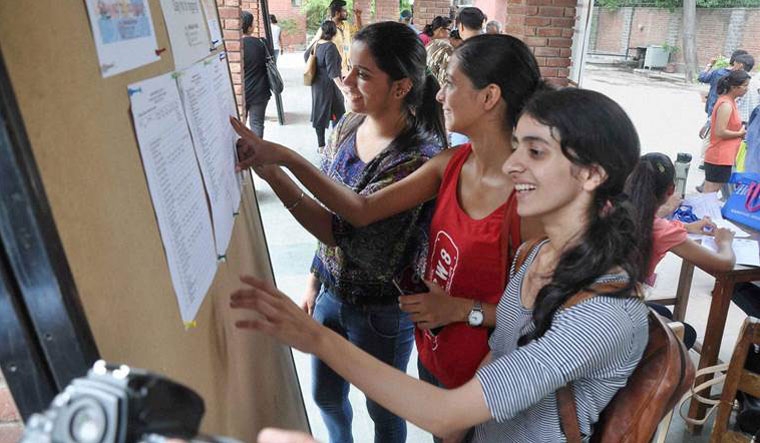 A majority of colleges closed admissions to popular courses while a few of those reduced the marks requirement in the range of 0.25 to two per cent in the second list announced by the Delhi University on Saturday.

There is a glimmer of hope for students as admissions to courses such as BA (Honours) Economics and BA (Honours) History are still open in some prominent colleges, even though the minimum marks required continue to remain on the higher side.

As many as 36,130 students have completed their admission process under the first cut-off list, thereby filling up a little over half of the 70,000 undergraduate seats in the university.

Of the eight colleges that had announced 100 per cent cut-offs for courses, Hindu College, Jesus and Mary College and Hansraj College have closed admissions. There are two vacant seats at Ramjas College for BA (Honours) Political Science, which is why it has not effected any change in the cut-off, which remains at 100 per cent.

Deen Dayal Upadhyaya College and Shaheed Sukhdev College of Business Studies had announced a cut-off of 100 per cent for BSc (Honours) Computer Science but after finding no takers, have brought it down to 98.5 per cent.

College of Vocational Studies, Dyal Singh College, Janki Devi Memorial College, Gargi College, Kamala Nehru College and Sri Aurobindo College are among the colleges that have closed admissions in BA (Honours) Economics. The course is still up for grabs at prominent North Campus colleges like Hindu, Hansra and, Indraprastha College For Women.

Lady Shri Ram (LSR) College has the maximum cut-off for the course at 99.5 per cent, while Hindu, Kirori Mal and Hansraj have kept the asking marks at 99 per cent.

LSR has again taken the top spot in the cut-off for BA (Honours) English at 98.75 per cent, while Hansraj is a close second at 98.5 per cent.

Among those that have closed admissions for History (Honours) are Hindu College, Maitreyi College, Moti Lal Nehru College, Shyam Lal College and Dyal Singh College. Miranda House has issued the highest cut-off for the course at 99 per cent, while Sri Venkateswara College has pegged it at 98 per cent.

Ramjas College has kept the cut-off at 100 per cent for Political Science (Honours), while LSR, Kirori Mal College and Atma Ram Sanatan Dharma College have pegged the scores at 99.5 per cent, 99.25 per cent and 98.25 per cent respectively.

BCom (Honours) aspirants still have a chance to make it to prominent colleges.

LSR has pegged the cut-off for BCom (Honours) at 99.5 per cent, while Hansraj and Hindu have kept it at 99 per cent.

Admissions to the course have closed at Aditi Mahavidyalaya, Bharati College, Kamala Nehru College and College of Vocational Studies.

In the first list, the minimum marks required for these courses were 99 per cent.

BSc (Honours) Mathematics is closed for admissions at LSR but it is still available at 98.75 per cent at Kirori Mal College and at 96.5 per cent at Indraprastha College For Women.

The admissions under the second cut-off will commence today, October 11 and go on till October 13. The admission process is online due to the COVID-19 pandemic.

These cutoffs will be declared only if there are vacant seats available. In case vacant seats are left further Merit Lists may be announced by the University of Delhi. Delhi University receives over 59,000 applications on final day of admissions under first cut-off...