It is a matter of debate whether Prime Minister Narendra Modi can be called an authoritarian; his critics believe that Modi is an authoritarian, but his supporters would disagree.
A L I Chougule 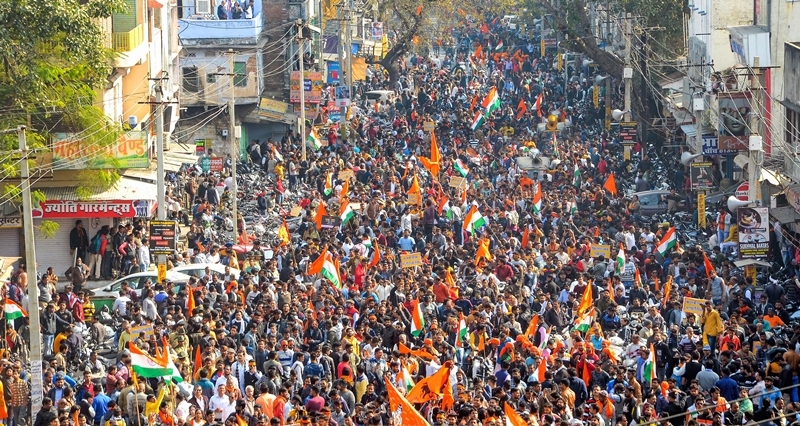 The street protests sweeping India since the passage of Citizenship Amendment Bill two weeks ago appear to be validating – to quote The New Yorker, one of the oldest and most trusted maxims of politics – sooner or later, authoritarians will go too far.

It is a matter of debate whether Prime Minister Narendra Modi can be called an authoritarian; his critics believe that Modi is an authoritarian, but his supporters would disagree.

However, it is also a fact that Modi is not known to walk the path of consensus. At least, that’s the general perception, given that he has been projected as a decisive leader and his party and supporters take pride in the fact that the country is led by a no-nonsense and plain-speaking prime minister.

Immediately after his re-election in May 2019, the prime minister broadly outlined his major objective to build a New India: ‘Sabka saath, sabka vikas, sabka vishwas’. In other words, his vision for New India was inclusive and non-discriminatory.

This was quite reassuring for all, particularly India’s largest minority community, after the prime minister’s acrimonious and polarising election campaign.

But soon after the dust of election had settled and the Modi government took office, it once again went back to the BJP’s polarising and majoritarian agenda, vague glimpses of which were evident in the prime minister’s disruptive election campaign.

It is therefore not surprising that what we have witnessed in the last few months is an aggressive narrative targeting the Muslim community, which has been like an anathema for the right-wing Hindutva party.

In July, the government passed the triple talaq bill. This was followed by revocation of Article 370, which grants autonomy to Kashmir, India’s only Muslim-majority state. In each case, Modi and his government met little resistance.

In fact, in both cases, there was an overwhelming support, both inside and outside of parliament and the disparate voices of dissent of the opposition parties, liberals and intellectuals didn’t matter much.

And now it is the Citizenship Amendment Bill (CAB) that grants citizenship for immigrants living in India of every religion, except Islam, which has provoked a nationwide backlash.

The alacrity with which Union Home Minister Amit Shah pushed the legislation in the two houses of parliament reflects the determination of the Modi government to implement its larger national agenda in its current tenure, unfazed by the ramblings of the incongruent opposition.

The passage of this bold legislation raises an important question: has the Modi government finally gone too far? Let’s go back to this government’s first term. Between 2015 and end of 2018, there were several cases of mob lynching by cow vigilante groups.

The victims in most cases were Muslims. In absence of a firm response from the government, the proliferation, magnitude and ferocity of mob violence went to such an extent that the Supreme Court came down heavily on the ‘new normal’ of recurring incidents of mob lynching and recommended enactment of a new anti-lynching law to instil fear and preserve the rule of law in a pluralistic society.

While the court blamed frequent instances of lynching on the ‘rising intolerance and polarisation’, the government remained silent and there was no backlash from the public to the chain of events either.

This may be because, according to many observers, Modi’s rise to national platform and his success in 2014 and 2019, stems from his willingness to play on profound resentments against the Muslims, which for decades had been considered offensive to voice in public.

Even though Muslims have been relatively poorer and less educated than their fellow citizens, many Hindus have always felt that they have been unjustly favoured by the successive Congress governments at the Centre.

This is one reason why Modi has been a hero for a large section of Hindus. While in 2014, Modi did not sell himself as a crusading nationalist or a champion of the Hindutva cause, but a visionary who would transform India into an economic boom, he was also helped by an overwhelming perception that the Congress, which had been in power for most of the past half century, had grown corrupt and arrogant.

As prime minister, Modi also surprised many by challenging people to confront many problems that had gone unaddressed, which set the tone for Modi’s premiership, or at least a part of it.

But the BJP’s socio-political agenda continued by demonising almost every ideological opponent – the Muslims, the liberals and intellectuals, Nehru, the Gandhi family, the Congress and voices of dissent across socio-political spectrum. The lack of journalistic scrutiny gave Modi and his party immense freedom to control the narrative.

However, 2019 was quite different from 2014. As election approached, it seemed Modi was losing momentum, hampered by an underperforming economy, rural and agrarian distress and rising unemployment.

But things changed in Modi’s favour after February 14, when a suicide bomber crashed a car laden with explosives into a military convoy in Pulwama. Modi rose in polls and coasted to a bigger victory, making him the most powerful prime minister in decades.

Almost in control of the narrative, brute majority in the Lok Sabha and amiable parties ready to support contentious, discriminatory and constitutionally suspect legislations in the Rajya Sabha, Modi probably thought that the CAB, now an Act, would meet little resistance.

Modi’s weak justification for the legislation has been that he was trying to protect those migrants who face historic discrimination because of religion. But for the first time since Modi became prime minister in 2014, people in large number aren’t buying it.

Stunned by the public rebuke, the prime minister has so far offered only platitudes. But the CAA has acted as a trigger for anger and widespread protests across the country against the government which has failed to fathom whether the protests are against only the CAA or a combination of issues – CAA, NRC, unemployment, crumbling institutions, neglect of education system and unchecked power to the Centre.

The large scale participation of people, both Hindus and Muslims, which includes students, youth and the middle class, against CAA is a testimony to the fact that people are questioning the government’s divisive agenda to polarise people on religious lines.

This did work for the BJP for some time. Modi and his party deployed vicious anti-Muslim rhetoric to persuade voters from the majority community to give him nearly unchecked power at the Centre in 2019.

But with CAA and NRC, it seems the Modi government has gone too far in implementing its Hindutva agenda. One doesn’t know where this campaign will end.