The performance of prime minister Narendra Modi, at the recently concluded United Nations Climate Action Summit in New York was electrifying (pun intended). He reiterated before a spellbound audience his commitment to increase renewable energy (RE) targets to 450 gigawatts (GW).

He said that this would be India’s contribution towards a stronger climate action plan (https://www.freepressjournal.in/world/un-climate-summit-modi-pledges-to-increase-indias-non-fossil-fuel-target-to-400-gw-by-2022). In fact, India’s potential for solar is much larger – at 748GW (http://www.asiaconverge.com/

Ironically, he also pointed to the significance of practice over preaching, reminding the world leaders how India is inching towards its goal of 175 GW RE by 2022.

The Ministry of New and Renewable Energy (MNRE) has reportedly already initiated drafting plans and policies to meet the new escalated target.

But back home, in India, his MNRE had other plans. It had probably misled the prime minister. It had failed to achieve even the target of 100 GW that Modi had committed his country to five years ago (https://pib.gov.in/newsite/PrintRelease.aspx?relid=122567). On closer examination, instead of achieving this 100 GW target, the ministry had managed to achieve just 31 GW (https://mnre.gov.in/physical-progress-achievements). 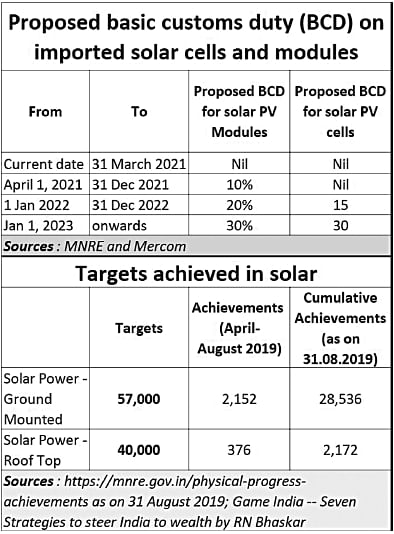 Worse still, there is growing evidence that the ministry has actually been doing everything to dissuade the speed with which solar installations can come up in India.

Take for instance the manner in which the ministry refused to fund the 50,000 rooftop solar installations that were sorely needed in the north-eastern state of Tripura. The Chief Minister had explained to the ministry last year that－since these houses were in the hills and that connecting them with grid power would take at least two years, if not more－rooftop solar installations were urgently needed (http://www.asiaconverge.com/2019/03/biplab-kumar-deb-has-big-plans-for-tripura/). The chief minister had also underscored to the ministry that with elections approaching, it was imperative that all houses be given power connectivity by end of 2018. But the ministry was unmoved. It informed him that it had funds only for grid connectivity.

It was the Chief Minister who had the sense to instead use his state’s funds and get the houses provided with rooftop solar. The happy result was that the state spent only Rs 50,000 per household connectivity, instead of a minimum of Rs 2 lakh that grid connectivity would have cost for each household.

But the other advantage was that solar power was more reliable. It did not face power shutdowns that grid power is often associated with. And, equally important, was that there was no billing for power after the rooftop solar had been installed.

So no subsidies after the first installation, no greasy palms of grid engineers asking for graft to ensure power supply or power theft, and no anxiety about power supply cuts even at night, because the storage batteries took care of this.

News about the advantages of rooftop solar in Tripura spread like wildfire. Now all the North-Eastern states are clamouring for it. But the MNRE continue to hold auctions for grid solar power instead of rooftop solar. So much for relevance and need.

The MNRE also appears to have forgotten that rooftop solar does not require any additional land. And that it can create as many as 83 million jobs (http://www.asiaconverge.com/2017/12/sabotaging-rooftop-solar-and-employment-generation/).

Moreover, rooftop solar, cluster-based and decentralised, managed by a private entrepreneur, can actually catalyse wealth in rural India like only milk could under Verghese Kurien’s vision (http://www.asiaconverge.com/2016/03/significance-of-the-dairy-industry/).

There is even more bad news from the MNRE. Even while the prime minister was rooting for expanding solar capacities in India, the MNRE was pushing a note (see table) to the finance ministry recommending the imposition of import duty of as much as 30% of solar cells and modules (https://mercomindia.com/mnre-proposes-customs-duty-imported-solar-cells-modules/). Does the MNRE believe that it can galvanise demand for solar with a 30% duty impost?

Prima facie, it would appear that the MNRE has no clue what must be done to promote solar power, especially rooftop solar. There is also the possibility of the grid lobby misleading the ministry into recommending these import levies, under the specious excuse that it will boost domestic production.

If it is the first, that can be remedied through education and discussion. If it the second, it is a carefully orchestrated move to undermine the vision of the prime minister and sabotage the National Solar Mission (https://mnre.gov.in/resolution).

What is painful is that these moves of the MNRE are being made at a time when there is an economic slowdown gripping the country. At such times, the need to usher in solar power－with an end to annual subsidies for rural power and rural employment－should be viewed as a national imperative.

Evidently, the MNRE does not think this way. It could be lack of vision, or worse. One only hopes that wiser counsels will prevail.